Obama angles for women's vote with help from Winfrey 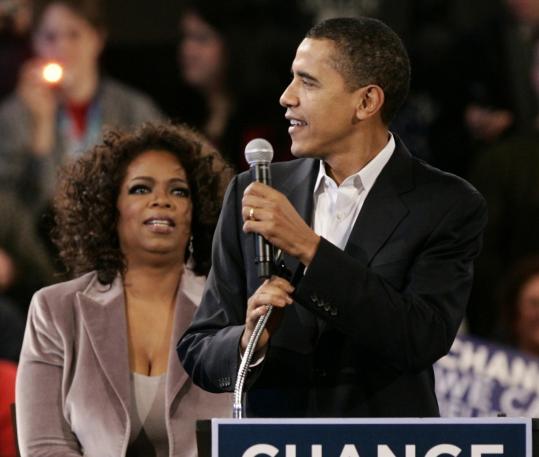 DES MOINES - When Oprah Winfrey gave Barack Obama a warm embrace at a massive political rally here yesterday, it was a rare political triumph for a presidential primary candidate.

Their twin billing - the cultural deity paired with the political phenom - was something of a watershed moment in politics and pop culture. Winfrey has never thrown her unrivaled power behind a candidate for president, and perhaps no presidential hopeful has been anointed by an arbiter with such reach.

Winfrey confessed that she felt slightly out of her element, but she said the problems confronting the country were so great, and Obama's candidacy so promising, she felt compelled to lend her name to his cause.

"We must respond to the pressures and the fortunes of history when the moment strikes," she said at yesterday's rally. "And Iowa, I believe that moment is now. . . . I'm here to tell you, Iowa, he is the one."

The events put Obama side-by-side with an African-American figure who already is what he aspires to be: a strong black leader who also manages to transcend race, and who has attained power by finding a new approach to negotiating an entrenched system. And just as Oprah has created a media empire by focusing on the universal - love, spirituality, and overcoming obstacles - Obama hopes to win the presidency by creating a new "politics of hope" by "restoring our sense of common purpose."

"I think there is a philosophical and ideological perspective that draws them together," said Susan Carroll, senior scholar at the Center for American Women and Politics at Rutgers University. "It's not necessarily liberal or conservative; it's really, 'This is a new way of thinking.' "

Both Obama and Winfrey launched their careers from Chicago in the mid-1980s. Winfrey began as a local TV talk show host; Obama started as a community organizer on the city's South Side.

Both constructed their public personas by opening up their personal lives, to a striking degree, to the public. Winfrey's viewers have become well-versed in the details of her sexual abuse as a child, her struggles with weight gain and self-worth - not to mention her own closet.

Telling her story, complete with ambiguity and self-doubt, is an approach that has helped Winfrey, an extraordinarily wealthy black single woman, relate to Middle America.

"She is very honest about who she is, and she relates to the struggles that people face in their everyday lives," Carroll said. "They build the show around tapping into that. I think [Obama] does aspire to the same thing."

Indeed, Obama has laid out his life's story in two memoirs, delving into everything from his complex relationships with his parents to his youthful experimentation with drugs. In his campaign, he has made healthcare reform personal by talking about his mother's death from cancer, and his wife, Michelle, has even discussed her husband's morning breath.

The vision that Obama derived from his life - that someday, America will no longer be divided by race or partisan bickering but united by "what we can do together" - speaks directly to Winfrey's philosophy, said Kathryn Lofton, a professor of religious studies and American studies at Indiana University at Bloomington.

"He is basically the thesis of Oprah's life," said Lofton. "He says in his speech, 'We come from many places, but we are this one thing.' She believes he represents a united America."

The kind of change that most concerns Winfrey is personal change, and she has embraced it as almost a religion. Her show and magazine are full of gurus and experts, plans, and how-to lists. Among the topics on her website this week: "How they revved up their sex life," and an invitation to teachers to join the "O Ambassadors" program, which will "inspire young people to become active, compassionate, and knowledgeable global citizens."

Obama's campaign is about marrying the personal and the political - that by investing in civic life, voters can change the direction of the country. His political fate rests on whether he can convince his party that delivering change requires inspiration more than it does experience.

Whether Winfrey can help him do that remains to be seen. The conventional wisdom holds that endorsements rarely translate into votes, but Winfrey's bonding with Obama is of a different quality than, say, Curt Schilling's endorsement of John McCain. She isn't just offering her support, she's embedding herself in his message.

"We need somebody who is committed to the well-being of all Americans," Winfrey said. "We need Barack Obama."

The sheer scale of Winfrey's celebrity is also on a different order than that of Schilling or other celebrities who have worked to elect candidates. Winfrey's show attracts 7.6 million viewers a day, and its "Oprah's Book Club" feature turns century-old classics into runaway bestsellers, and her net worth is an estimated $2.5 billion, according to Forbes Magazine.

"She is arguably as successful as any celebrity has ever been, in terms of being able to appeal to lots of people," said Matthew Baum, a political science professor at Harvard. "And she is not seen as the kind of celebrity people wish would shut up and go away."

"She has the street cred to talk about serious stuff," Baum said.

Obama's campaign knows it needs a spectacle less than it needs ground troops, so it sees this weekend's appearances as more an opportunity to organize new recruits, especially people who have never been involved in politics.

"Ultimately, we're a month out from the Iowa caucuses." said Jen Psaki, a spokeswoman for Obama. "We've got to turn this into an organizing tool that will help us in the final push."

If Winfrey's support makes a difference, it is likely to be among women, a crucial Democratic voting bloc who make up more than three-fourths of her TV audience.

Data from the Nielsen Company, which tracks television viewership, suggest that most viewers of Winfrey's show fit a coveted political demographic: Women aged 55 and older, including many in Des Moines and in Columbia, S.C. These women are considered a crucial part of Senator Hillary Clinton's base in early-voting states, and polls suggest she cannot afford to cede many to Obama.

At yesterday's rally, which attracted about 18,500 enthusiastic fans, some Iowans said Winfrey's endorsement of Obama would not have an impact on how they vote.

"I would rather make up my own mind," said Linda McCall, a 60-year-old counselor from West Des Moines who is still deciding between several candidates.

Connie Schultz, a columnist for the Cleveland Plain Dealer, wonders how many at this weekend's extravaganza will actually vote. She recalled the huge crowds that turned out to see Bruce Springsteen play a concert for John Kerry shortly before the 2004 election.

"You looked at it, and you thought, 'Wow, this is it, then. John Kerry is going to take Ohio and win the presidency,' " she said. "And no, he didn't."