Giuliani loses ground in some polls

He finds support over in Illinois 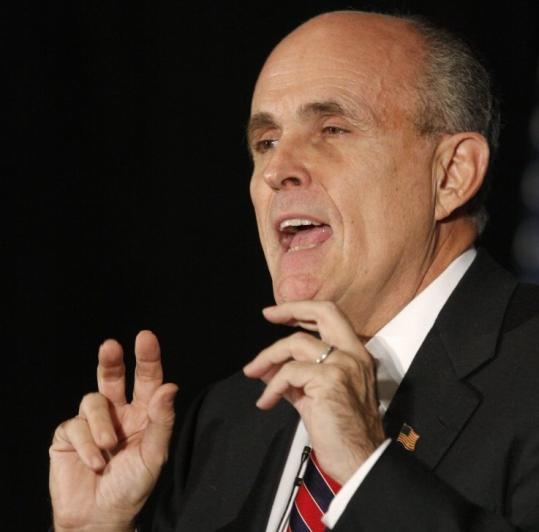 CHICAGO - A choppy 10-day stretch on the campaign trail has clipped a chunk of Rudy Giuliani's lead in national polls for the Republican presidential nomination. But with less than a month until the kickoff contests in Iowa and New Hampshire, Giuliani is still adhering to his unorthodox strategy of focusing on the big states that will vote several weeks later in the process.

The former New York mayor appeared Friday at two public events and attended four fund-raisers in Illinois, one of more than 20 states holding contests on Feb. 5.

Time is now a precious, finite resource for every candidate in both parties, and Giuliani devoted much of his time last week, when the skyrocketing Mike Huckabee and Mitt Romney were capturing most of the media attention on the Republican side, to prospect for campaign cash in later-voting states, many of them large states with expensive media markets.

He is also planning more fund-raising this week, at events wrapped around Wednesday's big GOP debate in Iowa. He's tentatively slated to spend two days in California and one in Oklahoma, both of which will hold primaries on the Feb. 5 "Super Tuesday."

After a debate in Florida 12 days ago, Giuliani hit turbulence and a series of polls indicated he lost a substantial bloc of support after being buffeted by a series of tough news articles, especially one reporting that while he was mayor, expenses for his police security unit were tucked away in obscure city agencies during a period in which he apparently was taking trips to Long Island for an extramarital affair.

Recent polls showed him sinking to a distant third in Iowa, which he has visited sporadically, slipping in South Carolina, which will hold its primary on Jan. 19, and holding a steady lead in Florida, which votes on Jan. 29 and is the linchpin to Giuliani's theory of victory. Three polls last week in New Hampshire, which will hold the first primary on Jan. 8, five days after the Iowa caucuses, showed him a distant second to Romney in one and third in two others, behind Romney and John McCain, for whom the Granite State is virtually make-or-break.

The polls showed little impact from three weeks of television ads for Giuliani, whose campaign continues to conserve its resources. He is not airing TV ads aimed at any other state.

Giuliani's campaign has eschewed the traditional strategy of focusing resources in momentum-building early states, instead banking on a breakout in a cluster of big states, including Florida, California, New York, New Jersey, and Illinois, that produce large groups of delegates to the party's nominating convention next summer.

On the stump, Giuliani showed no signs of concern about the hits of recent days. His breezy stump speech, which he delivers in an intimate, conversational style, remains basically unchanged, though in Illinois Friday he focused less than in the past on his record of cutting welfare, crime, and taxes while mayor. Speaking before about 450 members of the Illinois Manufacturers Association on Friday at Chicago's Intercontinental Hotel, he focused on economic issues, particularly his plans to cut the federal corporate tax rate, ease regulatory restraints, and provide generous tax incentives for individuals to buy their own health insurance. More than four months after sketching the outlines of a healthcare plan, Giuliani has provided no details on its impact on the US Treasury.

Giuliani, who became a multimillionaire in part by giving motivational speeches at $100,000 a pop, was at ease and connected with the audience by recalling the support from Chicago after the terrorist attacks of Sept. 11, 2001, on New York City.

"There was no one that gave us more help than the city of Chicago," he said.

As he often does, Giuliani alluded to the tragic events that made him famous without talking specifically about what he did. He doesn't have to; people remember the television images of those days and applaud warmly. He recalled that after the attacks, when the Yankees came to Chicago to play the White Sox, a large banner was unfurled that said: "Chicago loves New York."

"I don't know if they'd do that now," Giuliani quipped, earning some laughs.

He also recalled a Chicago police officer, wearing the department's distinctive hat with its checkered band, directing traffic in midtown Manhattan not long after the attacks. (The Windy City sent a contingent of police and firefighters to help out.) Giuliani said he spoke to the officer but later wondered, "How did he know where to send people?" and whether there still might be motorists lost somewhere in the Bronx. It was another light-hearted allusion, evocative of the serious subject that underpins his candidacy.

Giuliani made similar remarks later in the day at a town hall meeting, attended by about 150, in the ballroom of the National Italian American Sports Hall of Fame, located in a neighborhood a couple of miles west of Chicago's Loop. Former lieutenant governor Corinne Wood endorsed Giuliani during the event, adding to a large list of Giuliani backers in Illinois that includes former governors Jim Thompson and Jim Edgar and Illinois House Republican leader Tom Cross.

As evidence of Giuliani's strategy, he has been to Illinois nearly as often as he has been to Iowa since Labor Day. His campaign has the largest presence on the ground, with a paid staff of eight working out of headquarters in Lisle in the Republican stronghold of DuPage County.

During a question period after his remarks at the hall of fame, no one asked about the reports on his mayoral security billings, his love life, or the fact that he announced last week he had long ago stepped down as head of Giuliani Partners.

Leaving the event, Lynda Filipello said those aren't issues Illinois Republicans are talking about when they assess presidential candidates.

"People's main issue is they want someone to keep us safe," Filipello said.