Paul's campaign blimp will be coming to Boston 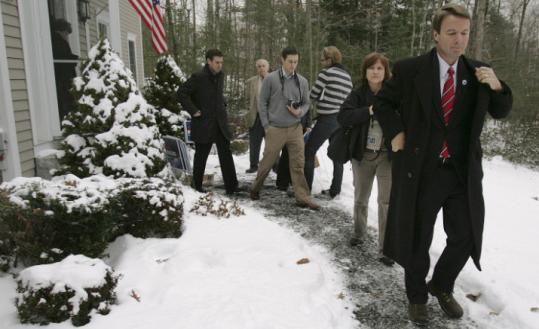 To say Ron Paul and his supporters have been waging an unconventional campaign for president would be an understatement.

And now, they are planning another first - a blimp.

That's right, an airship with Paul's name on the side will, if all goes as planned, tool around New Hampshire leading up to the Jan. 8 Republican primary.

Organizers said on their website yesterday that they have raised the initial $200,000 to launch the blimp on Monday in Elizabeth City, N.C. They aim to raise $350,000 total by Dec. 21 to keep it in the air through the primary.

The plan for the "Ron Paul Blimp Tour" calls for the blimp to star in rallies in Washington, D.C., on Tuesday and in New York City on Wednesday and Thursday, before arriving in Boston on Friday after flying over Worcester. The blimp is to appear at a rally in Boston next Saturday, then play a key role in a fund-raising event the day after timed with the Boston Tea Party: Tea is to be dumped from the blimp into Boston Harbor. The first rally in New Hampshire is scheduled for Dec. 18.

Early primary state voters report many calls, visits
WASHINGTON - Next time you phone Aunt Betty in Des Moines and she answers with a bark, don't take it personally. Folks in Iowa, New Hampshire, and South Carolina have received lots of unsolicited telephone calls and visits lately from presidential campaigns.

So says a telephone poll.

Eight in 10 Iowa Republicans and Democrats say they have fielded recorded phone calls about the 2008 contest, according to a poll of three early voting states released yesterday by the Associated Press and the nonpartisan Pew Foundation. It's close to 7 in 10 in New Hampshire and 4 in 10 in South Carolina, where the primaries are slightly later.

Almost two-thirds of Iowa Democrats and more than half from the party in New Hampshire say they've been called by people about the campaigns, compared with nearly half of Republicans in the two states. In South Carolina, it's closer to one-fifth for members of both parties.

If that's not enough, about one-third of Democrats in Iowa and New Hampshire say they have been visited at home by campaign workers.

The figures are more like 1 in 10 among Republicans in those states, and very few in South Carolina.

Calif. electoral proposal will not be on June ballot
A proposed initiative that drew national attention for its potential to affect the 2008 presidential election will not appear on the June ballot.

Republican backers of the measure, which could have tilted the presidential contest toward the GOP nominee by changing how California awards electoral votes, conceded Thursday that they were unable to raise sufficient money.

Sacramento consultant Dave Gilliard, the campaign manager, said that even if a financial angel were to shower the campaign with $1 million, there is not enough time to qualify the measure for June.

Gilliard said proponents held out hope that the measure could appear on the November ballot, with the presidential contest. But even if it were on that ballot and won voter approval, it might not affect the 2008 election. The initiative might not kick in until 2012, Gilliard said - adding that courts probably would decide the question.

The proposal would replace California's winner-take-all system of appropriating its 55 electoral votes, awarding them instead by which candidate wins individual congressional districts.

Democratic National Party Chairman Howard Dean has said Democrats could not win the White House without capturing all of California's 55 electoral votes, which are more than 10 percent of the 538 electoral votes nationally.

Governor Arnold Schwarzenegger, a Republican, had expressed skepticism about the measure.

And Democrats had mounted an aggressive effort to block it, filing a complaint with the Federal Election Commission alleging that backers of Republican candidate Rudy Giuliani violated federal regulations by supporting the proposal.