THIS STORY HAS BEEN FORMATTED FOR EASY PRINTING
Campaign notebook

Giuliani resigns as head of firm, calls his work there 'totally legal' 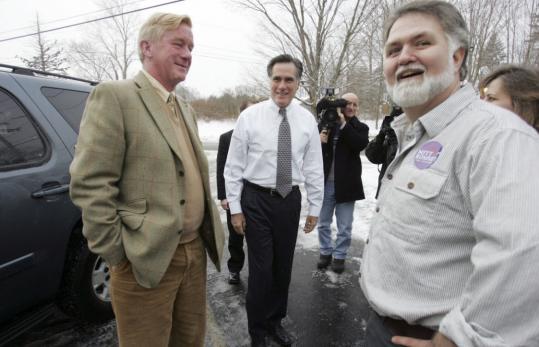 DES MOINES - Republican presidential hopeful Rudy Giuliani has stepped down as head of his consulting firm, Giuliani Partners, after months of refusing to disclose the firm's clients or the role he played.

The firm, started by the former New York mayor when he left City Hall in 2002, earned Giuliani about $4 million last year. Mindel said he would retain his equity stake in the company.

The yesterday identified one client as the Persian Gulf country of Qatar, which was accused of sheltering suspected Sept. 11 mastermind Khalid Sheikh Mohammed, but today it is a US ally. Others identified in published reports as Giuliani clients are airlines, energy companies, and communications businesses; one client, Purdue Pharma L.P., makes the controversial painkiller OxyContin.

Giuliani aides said he has not been involved in day-to-day operations of the firm since last spring. Yet Giuliani has never said so until now, despite being asked repeatedly about it.

"Everything I did at Giuliani Partners was totally legal, totally ethical," he said Nov. 5. "There's nothing for me to explain about. We acted honorably, decently."

The spot shows victims of the gangs in Central America, then shows victims in the United States as the screen says: "Pushing Drugs. Raping Kids. Destroying Lives. The Consequences of Open Borders."

The ad, which will air in Iowa, is a sequel to one of the most talked-about ads of the presidential campaign so far, one that warned terrorists were loose in the United States because of lax immigration laws. It showed a hooded man entering a shopping mall and ended with the sound of an explosion.

The Colorado congressman has been the most vociferous on illegal immigration, and at last week's debate took credit for other Republicans also talking tough.

Romney draws sixth place on Mass. primary ballot
When it comes to the order on the Massachusetts presidential primary ballot, former governor Mitt Romney will not enjoy any home field advantage on Feb. 5.

Romney drew the sixth position among eight Republicans at a drawing held yesterday by Secretary of State William F. Galvin.

"You don't want to miss your chance to elect Governor Mitt Romney," Spencer Zwick writes in an e-mail released by the campaign yesterday.

"The ad you sponsor could be the one that puts Governor Romney over the top!"

The e-mail directs supporters to the "One Million Dollar Media Victory Fund" page on Romney's website, which asks them to donate as little as $80 to run one of Romney's ads in Iowa to as much as $1,275 to air one in New Hampshire.

The e-mail is meant to look as if it was forwarded casually from an e-mail Romney donor Josh Sato sent to his "entire Rolodex."

"The race in Iowa and the other early states is neck and neck," Sato wrote.

"I'm just not going to go off into evaluating other people's doctrines and faiths," Huckabee said.