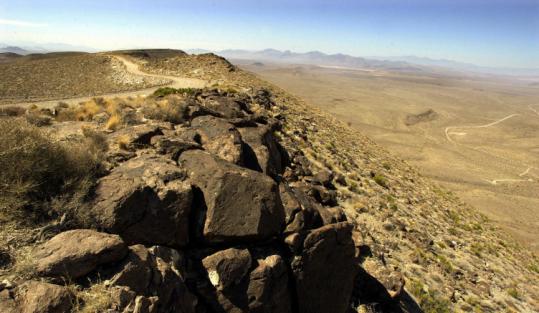 LONE PINE, Calif. - Henry Williams, a Paiute Indian from Bishop, drove an hour south to a meeting hall to deliver his tribe's verdict on the contested federal plan to bury nuclear waste inside Nevada's Yucca Mountain, about 16 miles from the California border.

"I am here to speak for my Paiute family," he told a public hearing last week held by federal government. "We have been here for thousands of years. Our spirits in this area are totally against this."

The federal plan to bury nuclear waste at a dump in Yucca Mountain has encountered one setback after another in the courts. It is hated in much of the West. It looks like it is in deep political trouble in Congress. And a number of presidential candidates have attacked the dump.

But the wheels of the US Energy Department bureaucracy are still going through the exacting legal steps to get a license for Yucca Mountain, where it wants to bury 70 metric tons of spent commercial fuel and nuclear weapons waste.

In the last week, the department has held a series of public hearings on two environmental impact statements, a process required under federal law.

At the hearing in Hawthorne, Nev., only four local people showed up, greeted by 30 or so federal employees and contractors bused in from Las Vegas. About 55 people showed up for a meeting in Reno. A bigger turnout is expected in Las Vegas today and in Washington on Wednesday.

The only hearing in California was held Thursday in Lone Pine, part of Inyo County whose eastern border can be seen from the crest of Yucca Mountain. A few dozen area residents showed up, including a local book publisher, several American Indians, some retirees, a few antinuclear activists, and a lot of people in cowboy boots and worn blue jeans.

Asked about public opposition to the dump, Ward Sproat, the Energy Department's director of civilian radioactive waste management, said in an interview, "I wouldn't expect anything less. This program has been around a long time and it has a lot of history."

Government scientists insist that there is no chance any radioactivity could leak for 10,000 years and that the dump will be safe for hundreds of thousands of years after that.

The hearing also focused on another aspect of the plan: getting the waste to the dump.

The plan calls for 13,600 truck and rail shipments of waste, about 12 percent of which probably would move through California.

Wynne Benti, a book publisher in Bishop, said the environmental impact statements, one for the dump and one for a rail transportation plan, failed to adequately assess the risk of accidents in transportation or the federal government's ability to respond.

"Recent experience shows, from the collapse of a bridge in downtown Minneapolis to a barge dumping oil into the San Francisco Bay, that federal and local agencies' ability to coordinate and quickly deal with the aftermath of large-scale accidents have been wrought with delays in communication and immediate, critical action," she said.

The Energy Department has also failed to explain who will pay for emergency training and equipment along those rail and tuck lines, said David Weisman of the Alliance for Nuclear Responsibility.

The group alleges that the Energy Department held the hearing in remote Lone Pine to discourage a larger turnout. Lone Pine was chosen because it is part of Inyo County, an AULG, or "affected unit of local government," Energy officials said. Once the waste gets to Yucca Mountain, it would be transferred to special 18-foot long alloy canisters inside a series of large facilities built to handle highly radioactive waste.