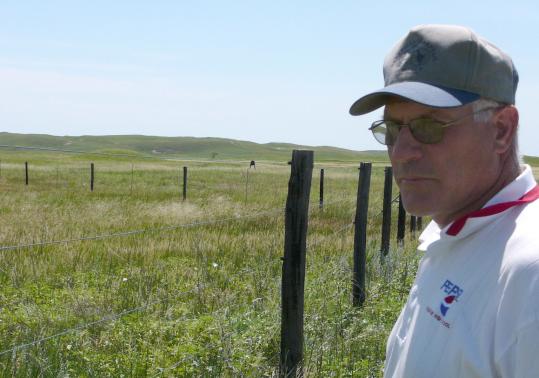 When the auction was over, they walked away with what they came for: 26,300 acres of prime ranch land, at a cost of nearly $10 million.

"It hasn't taken long to find out he's serious," said Duane Kime, a rancher and Turner neighbor who was outbid by about $100,000 by the CNN founder.

But what exactly is Turner serious about?

The question gnaws at folks here and in other rural areas of the country where people once thought the billionaire just wanted to play cowboy.

Turner has amassed 2 million acres over the past two decades to become the largest private landowner in the country. He owns large chunks of land in 11 states, with most of his holdings in New Mexico, Nebraska, Montana, and South Dakota, and is restoring buffalo, cutthroat trout, wolves, black-footed ferrets, and other flora and fauna that once filled the Plains.

His front men say their boss does not have a secret agenda; that he wants just to be a rancher. But each big purchase only heightens the anxiety and gives rise to conspiracy theories, the most ominous of which hold that the swashbuckling Atlanta executive is bent on putting Nebraska ranchers and farmers out of business.

"With him it's such a concern," said Cindy Weller, who lives on the family ranch near Mullen. "You don't know what his plan is and what he's going to do."

Among the theories: Turner is trying to corner the land over the Ogallala Aquifer, the world's largest underground water system, to gain power in the water-starved West.

Or he is scheming, perhaps with the United Nations, to create a vast wildlife refuge and turn it over to the federal government, removing the land from Nebraska's tax rolls. That could hurt schools and other services already starved for cash.

"The entire way of life here is threatened, and it's not just Turner, but he's one reason. The whole area is economically depressed," Weller said.

Mike Phillips, executive director of the Turner Endangered Species Fund, a Turner offshoot, insisted his boss is just a "doggone serious rancher," though one dedicated to preserving the environment.

But the very presence of Phillips is making people wonder. He once worked with The Wildlands Project, an environmental group that wants to create a continent-wide network of nature preserves to save endangered species. The Turner Foundation, the charity arm of Turner's empire, has contributed money to it and gives millions to dozens of other environmental groups.

Turner's organizations also have been in discussions with the World Wildlife Fund and the World Conservation Union about conserving bison. The groups have expressed interest in developing a huge park where bison could once again roam the Great Plains.

Actually, Turner's spokesmen say, the driving force behind Turner's land purchases is the desire to make money. Turner's Vermejo Park Ranch in New Mexico, for example, offers weeklong elk hunting excursions at $12,000 each. He has also entered the restaurant business with gusto, opening more than 50 Ted's Montana Grill restaurants across the country that feature bison meat.

"Our agenda is not to create a vast wildlife preserve," Evans, vice president of Turner Enterprises, said in an e-mail. However, Turner is concerned about preserving animal habitat while ranching. "We think we can do both."

Ron Arnold, head of the Center for the Defense of Free Enterprise and author of several books critical of the environmental movement, said he has studied Turner's activities and come to his own conclusion. Turner is amassing land for "his own sense of grandiosity," he said. "If he wants to hunt ducks on it, he hunts ducks on it. If he wanted to raise buffalo, he raised buffalo on it. That's all I could conclude."

The sturdy bison need less attention than cattle, requiring fewer ranch hands. That adds to worries in Hooker County, where there is about one person for every 721 square miles, just 15 kids graduated from high school last year, and the population dropped 3.4 percent from 2000 to 2006.

Another complaint is that Turner's extraordinary ability to outbid just about anyone is driving up land prices, making it tougher for longtime ranchers to expand and keep their operations afloat.

Over the past decade, ranch land in the Sandhills region of the state where Turner owns all his property has more than doubled in price to over $300 an acre.

Kevin McCully, a Mullen-area land broker, said only a part of the increase can be attributed to Turner. Maybe, said Kime, but he just knows he can't compete: The recent auction was the third time in recent years that he was outbid by Turner, who now borders about three-quarters of Kime's ranch.

Kime wonders whether someday he might have to sell the ranch that has been in the family for generations. "Turner might be the only one around that would want to buy it," he said.