Has highest foreclosure rate in US 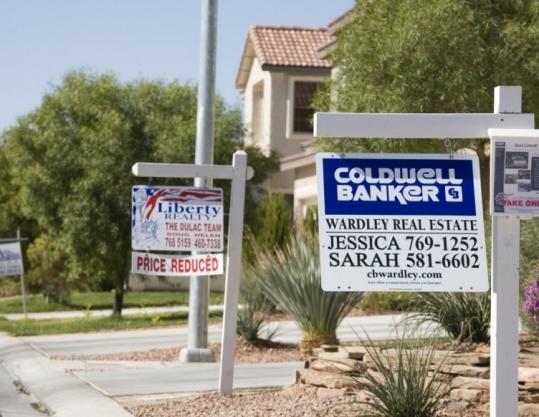 After years of robust growth, the housing market in Las Vegas has been beset with the highest foreclosure rate in the nation, as well as a drop in prices and declining sales. (Adam Tanner/Reuters)
Email|Print| Text size – + By Susan Milligan Globe Staff / December 2, 2007

HENDERSON, Nev. - In America's ultimate boomtown, the signs of economic trouble literally show up in the streets, with "for sale" sign after "for sale" sign stuck in the front yards of homeowners who lost their houses because they couldn't afford to pay their mortgages.

Las Vegas, a national symbol of growth and opportunity, now suffers the highest foreclosure rate in the country. Nearby Henderson - full of gated communities as well as moderately priced housing - now has more than 300 properties in foreclosure or preforeclosure and some streets have as many as six houses in the process of being sold because the owners couldn't keep up the payments.

The subprime mortgage crisis, which has led many thousands of homeowners to lose their houses and caused trouble in the financial markets, is becoming a campaign issue as well as the housing debacle hits key battleground states in the presidential campaign. Florida and Ohio - two pivotal states in the 2000 and 2004 elections - are being hit especially hard by the mortgage crisis, as are Arizona and Nevada, both important states in the 2008 election.

"I think it has huge political ramifications," said Jeremy Aguero, a financial analyst with Applied Analysis, a Las Vegas-based economic consulting firm. "We have a crisis situation in southern Nevada."

The Silver State is key in the primary campaign since Nevada moved up its caucuses to Jan. 19. Democrats sought to enhance Nevada's role in the nominating process to bring more attention to the West and its Latino population.

But Nevada is also becoming a political backdrop for the national mortgage crisis, which is particularly striking, analysts say, because the state has been such a glittering symbol of expansion and economic opportunity in recent decades.

The state still attracts 6,000 new residents every month, and business analysts predict that the casino industry will bring 80,000 new jobs to Las Vegas by 2012. But the state's housing woes are not only forcing tens of thousands of Nevadans out of their homes; it is also having a ripple effect on the entire economy, according to housing and financial specialists.

"It's like being on the Titanic. It doesn't matter if you are in first class, the sides of the boat or the bowels of the boat, we're all going down," said Gail Burks of the Nevada Fair Housing Center, which helps residents avoid foreclosure.

The subprime mortgage crisis was caused when lenders gave often-risky loans to buyers who would not be approved for mortgages under normal standards, either because they had bad credit or lacked the financial records - such as proof of income - to get a standard mortgage.

Homebuyers were lured by initially low interest rates, but later defaulted when the interest on their adjustable rate mortgages rose dramatically. In many cases, their loans had already been sold to a secondary lender - sometimes one based overseas - and homebuyers could not find a way to refinance and keep their homes.

In addition, some wealthier buyers bought homes well beyond their means, taking "interest only" loans that allowed them to pay only interest for the first 10 years. These buyers assumed the value of their homes would increase dramatically before they would have to start paying on the principle. But as the housing market has softened, these higher-income buyers are finding that they cannot sell their homes at the price they want - or at all, Burks said.

One of the Nevada housing group's clients worked for the Department of Homeland Security and lost his home through foreclosure, Burks said. His credit damaged, he then lost his job - which requires security standards such as credit worthiness - which made it even more difficult for him to get another home, she said.

But even those not selling or buying homes are affected by the crisis, said Dean Baker, codirector of the Center for Economic and Policy Research in Washington. Vacant homes bring down the property values on a street, making those homeowners vulnerable. Baker, like many economists, believes the housing slowdown will cause a recession next year.

The national economy is heavily driven by consumption, and much of consumer activity is funded by home equity loans, Baker said. Lower home values mean fewer, and smaller, home equity loans, leading to a slowdown in consumer spending on other items.

"There are very, very few businesses that aren't indirectly, if not directly, going to feel some sort of repercussion because of the housing slump," Smith said. "Housing affects almost every part of the economy, because of all the related segments that go into building a house."

Democrats are seizing on the issue, and several presidential candidates have offered plans to punish predatory lenders and help people avoid foreclosure. The House earlier this month approved sweeping legislation, drafted by Representative Barney Frank, Democrat of Massachusetts, that would establish minimum eligibility standards for borrowers, create a licensing system for lenders, and protect renters faced with eviction because the owners of their residences defaulted on their mortgages.

But the impact of the mortgage crisis is likely to continue well into next year, when the presidential campaign is in full swing, analysts say. And in Nevada, which will play an important role in the presidential nominating process, voters will be especially hard hit by the slump, Baker said.