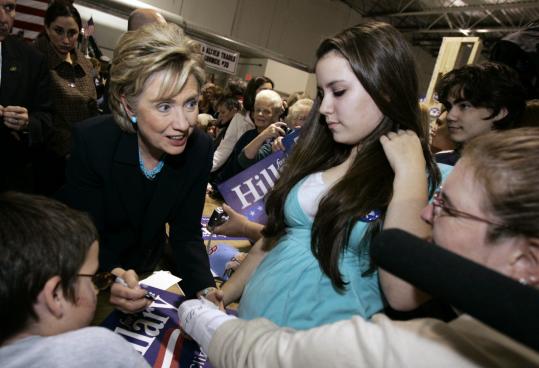 Democratic presidential hopeful Senator Hillary Clinton signed autographs while campaigning Monday in Brentwood, N.H., a state where she has some important advantages, including a history of campaigning for her husband. (Elise Amendola/Associated Press)
Email|Print| Text size – + By Marcella Bombardieri Globe Staff / November 30, 2007

CONCORD, N.H. - With Hillary Clinton faltering in polls leading up to the Iowa caucuses, the New Hampshire primary is looming as a possible make-or-break moment for her - in a place where she has most of the party's key endorsements and a sizable lead in the polls, but where a defeat could be devastating.

Unlike in Iowa, where the major endorsements are split among several candidates, Clinton has the support of most of the Democratic party establishment in New Hampshire. She has other important advantages here that she lacks in Iowa, including a history of campaigning for her husband and New Hampshire's recent tradition of electing female politicians.

However, her lead in the New Hampshire polls has narrowed in the last month, and analysts say her enviable organization does not guarantee protection against the wave of momentum that could propel Sen ator Barack Obama of Illinois, if he were to win the Iowa caucuses, which are five days before the Jan. 8 primary.

Because of New Hampshire's traditional influence and the high expectations generated by Clinton's mass of endorsements here, analysts say, she could not lose both Iowa and New Hampshire and survive in the race.

"I would argue that New Hampshire is the firewall of last resort," said Dante Scala, a University of New Hampshire political scientist. "New Hampshire has to come through for her if Iowa doesn't."

Clinton's campaign expresses confidence about her performance around the country, including in both the crucial early states. But it has also flooded Iowa with new staff in the days since her poll numbers began dropping, and Clinton is expected to spend much of December traveling the state.

There is also a growing sense of urgency among the New York senator's Granite State ranks. The New Hampshire campaign recently opened several field offices and hired staff to bring the total in the state to about 100.

Each week, hundreds of campaign volunteers knock on an average of 25,000 doors statewide, and they have made close to a million phone calls seeking and solidifying support from voters, according to Clinton's New Hampshire state director, Nick Clemons.

But Obama's campaign has also stepped up its efforts and is preparing for a showdown as well. Obama's campaign said it has kept pace with Clinton's in paid staff and its volunteers are just as busy knocking on doors, making phone calls, and writing postcards. Obama spokeswoman Leslie Miller, who said the campaign knocks on 20,000 doors a week, questioned the Clinton figures, saying Obama canvassers rarely run into their Clinton counterparts.

But outside political observers say Clinton's campaign is more agile, thanks to her backing from members of the local party establishment, who are better-schooled in what it takes to win the first-in-the-nation primary.

The state's two leading Democrats, Governor John Lynch and former governor and current senatorial candidate Jeanne Shaheen, are staying neutral in the race, but their spouses have endorsed Clinton, which analysts see as a clear sign that their political organizations will be supporting her. In addition to Norelli, Clinton has the backing of the state Senate president, the state party chairwoman who led the Democrats to victory in 2006, and most of New Hampshire's top political operatives.

It is unusual but not unprecedented for so much of the Democratic muscle in New Hampshire to coalesce around one person in a primary without an incumbent. In 2000, Vice President Al Gore had the backing of most of the party establishment, and eked out a four-point win against Senator Bill Bradley of New Jersey. His victory was enough to seize the momentum going into larger states, and he won the nomination with ease. Some Obama supporters point to Bradley's close finish, even without the momentum of a win in the Iowa caucuses, as evidence that establishment backing does not erase all vulnerabilities.

Obama's biggest endorsement is from freshman US Representative Paul Hodes; the only other Democratic member of Congress from New Hampshire is neutral. But Obama's supporters say it is natural that Clinton would monopolize the endorsements.

"The reality is that Barack Obama has been on the scene for 10 months running against the most powerful Democratic political force for two decades, the Clintons," said Obama cochairman Ned Helms. "They were busy all spring and summer courting the names you would recognize, at the same time we were engaging people . . . on 'what are your passions?' "

Helms said people do not enter the voting booth pondering whom their state representative has endorsed, especially the independent voters who make up a large chunk of the state's electorate. But the support of a broad swatch of the party's elected leadership will translate into on-the-ground organizational support on primary day. And Clinton's supporters say the endorsers have been working hard in all facets of the campaign.

New Hampshire is considered friendlier territory than Iowa for Clinton for several reasons. She spent a lot of time campaigning for her husband in 1992 while bypassing Iowa because home-state Senator Tom Harkin was running. Women are unusually prominent in New Hampshire politics, perhaps because its part-time Legislature has attracted female candidates for decades.

Clinton has maintained a clear lead in polls, though recent ones have gotten tighter. A CNN/WMUR poll in September put her ahead of Obama by 43 percent to 20 percent. In a Suffolk University/WHDH poll this week, she led him 34 percent to 22 percent.

And the results of the Iowa caucus could significantly influence the New Hampshire primary, said Mark Mellman, a veteran Democratic strategist who is not affiliated with a campaign. An Iowa victory by former senator John Edwards of North Carolina, who is vying with Clinton and Obama for the lead in some Iowa polls, would not translate much in New Hampshire, where Edwards fared very poorly in 2004, Mellman said. But if Obama won Iowa, there would be a flood of positive press about him and questions about whether Clinton is electable. "It's unfair and inaccurate, but it would be a lot of chaff to have to navigate through in five days," he said.

If Obama wins Iowa, Scala said, Clinton's imperative will be to hold on to college-educated, professional women, among whom she has done surprisingly well, considering that Obama's idealistic campaign is attractive to their demographic.