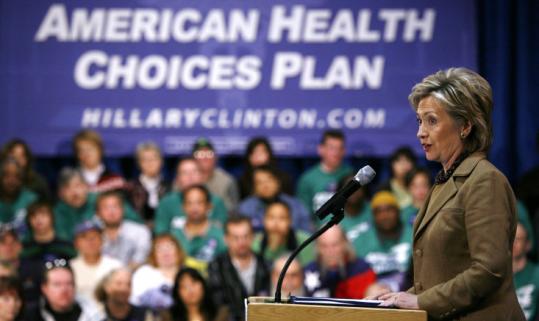 Hillary Clinton yesterday launched one of her most pointed attacks yet against chief rival Barack Obama, charging that his healthcare plan would leave millions of uninsured Americans "virtually invisible."

Continuing her aggressive new tack against her Democratic primary opponents, Clinton said that Obama, by not mandating that individuals have health insurance, would fall woefully short of the goal of universal coverage that all the leading Democrats share.

The New York senator argued that Obama's plan would leave uninsured as many as 15 million of the estimated 47 million Americans without coverage, and she asked Iowa voters to imagine the outrage had presidents Franklin D. Roosevelt and Lyndon B. Johnson created Social Security or Medicare but not offered them to all seniors.

"If you don't start with the goal of covering everybody, you'll never get there," Clinton said at Des Moines Area Community College in Ankeny, Iowa. "I don't understand why we have this difference on the Democratic side. If anything, Democrats should stand for universal healthcare."

Obama, in a conference call with reporters before Clinton's speech, said that he will cover all Americans by ensuring that health coverage is affordable.

"I believe that the reason people don't have healthcare is because they can't afford it, not because they don't want it," the Illinois senator said, going on to say that while several Democratic candidates had worthy plans, the question is, "Who's actually going to be able to deliver on this."

The back-and-forth between Clinton and Obama over their healthcare proposals, which began at the last Democratic debate two weeks ago, illustrates the heightened intensity of the party's primary race, particularly in Iowa, which holds its caucuses just five weeks from today.

Over the last two weeks, Clinton has criticized Obama and former senator John Edwards of North Carolina on foreign policy experience, Social Security, and other issues with a directness that would have been unthinkable a month ago, before her lead narrowed nationally and in key states. Clinton lamented in the last debate what she called mud-throwing among Democrats, but told CBS anchor Katie Couric this week: "After you've been attacked as often as I have from several of my opponents, you can't just absorb it. You have to respond."

The stakes on healthcare could hardly be higher, with polls showing that Democratic voters care more about that issue than any other.

Clinton, Obama, and Edwards, who are closely bunched in Iowa polls, all say their plans would bring universal coverage, but they differ in how they would accomplish it. Clinton and Edwards would require individuals to carry health insurance, as Massachusetts now does under its new healthcare law, while Obama focuses on lowering costs and would only require parents to have coverage for their children.

Clinton pounced on that distinction yesterday, charging that Obama's plan would "leave 15 million Americans virtually invisible." By her calculation, that number would include 100,000 in Iowa, or, as she noted pointedly, more than half the population of Des Moines.

For their part, Obama and his campaign argue that Clinton's unsuccessful attempt at universal coverage as first lady in the 1990s is symptomatic of her failed leadership, saying she is too beholden to special interests and lobbyists to pass meaningful reform.

"Another day, another desperate attack," Obama spokesman Bill Burton said in a statement yesterday. "Demonizing anyone who doesn't share her exact plans on healthcare is exactly why Hillary Clinton flunked the opportunity she had to pass universal healthcare in 1993."

Obama's camp also says that Clinton has changed her mind on the merits of a so-called individual mandate, pointing reporters to a series of comments she made in the 1990s in which she was critical of such a requirement. (Clinton's campaign counters that those remarks were taken out of context, and that her healthcare legislation did compel everyone to have coverage.)

Edwards joined yesterday's debate by criticizing both Obama and Clinton - Obama for not mandating coverage, Clinton for failing to include in her plan a way to enforce that requirement.

"Barack Obama's plan leaves out 15 million people . . . But it is just as bad to say that everyone will have insurance without a plan to get there," Edwards said in a statement. "Hillary Clinton says her plan will cover everyone through a 'mandate' but does not provide even the most rudimentary idea, much less a detailed plan, of how this 'mandate' would work." Edwards says he would require people to show proof of insurance when they pay income taxes or receive healthcare, and that he would garnish wages and use collection agencies for those who refuse to pay.

Clinton yesterday suggested several possible ways to ensure that her mandate is followed, saying, "We'll work to make sure that these mandates are enforceable."

Polls have shown that voters believe Clinton is the best Democrat to fix healthcare, suggesting that despite efforts by Obama and Edwards to hold her past failures against her, she has succeeded in turning that experience into an asset.