Many cite a focus on health, children 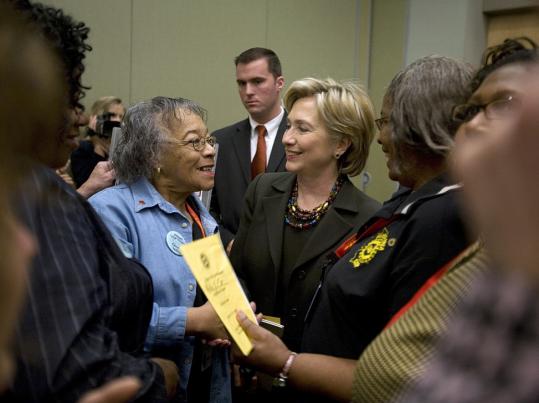 Hillary Clinton chatted with Ginny Nailing of Peoria, Ill., during a campaign stop Monday in Dubuque, Iowa. Analysts say she connects with working-class women by presenting an image as a fighter who has overcome obstacles in her life. (Mark Hirsch/Associated Press)
Email|Print| Text size – + By Marcella Bombardieri Globe Staff / November 24, 2007

Hillary Clinton's campaign is capitalizing on an overlooked strain of feminism in blue-collar women - nurse's aides, factory workers, farmers, and single mothers - to help fuel her strength among the Democratic candidates for president.

Even many working-class women who have spent their lives in traditional roles at home and work have been animated by Clinton's effort to shatter what she has called "the highest, hardest glass ceiling."

In recent interviews, some of these Clinton supporters say that they have been impressed enough by her advocacy for healthcare and children to jettison their previous views of her as a brash, ambitious lawyer and politician. Some said a female president would do things not just differently, but better.

"We need to have a woman president," said Honey Davis, 64, of Onawa, Iowa, a longtime nurse's aide who has diabetes. "A woman would be a little more tender-hearted toward the people, and knowledgeable about family issues."

In addition, Davis said, because of Clinton's experience watching the wheels of power grind while she was first lady, the New York senator "will have some ways of getting around the old-boy type of thing."

Clinton is viewed more favorably in general by women than men. Increased support among college-educated and professional women - her peers - helped fuel a late summer surge that nearly doubled her lead in the national polls.

But the backbone of her support, going back to her first US Senate race seven years ago, remains among those who resemble her the least - blue-collar and working-class women, as well as black women. Analysts say she connects with working-class women emotionally by presenting an image as a fighter who has overcome obstacles in her life, and appeals to them politically by offering proposals that would help their pocketbooks. As the most recent polls show her neck-and-neck with Barack Obama in Iowa and the gap closing in New Hampshire, one constituency she consistently wins hands-down is working-class women. A Boston Globe poll this month of likely primary voters in New Hampshire suggested that Clinton has higher support among Democratic women without a college degree than among better-educated women. Several national polls have shown the same trend.

Clinton's campaign has tried to exploit this advantage with several events geared toward working-class women, including a series of evening telephone calls called "The Dishes are Done," when Clinton gets on the line to speak with groups of undecided New Hampshire women.

She has also tried to strike a balance, emphasizing the historic nature of her candidacy and her Washington experience and skills, while also softening the edges of her longtime public persona as a driven, professional woman who elevated career above all else.

Last month, she regaled an audience in Manchester, N.H., with stories about how awkward it was at her Little Rock, Ark., law firm when she became visibly pregnant, and how she didn't know what to do when baby Chelsea was crying inconsolably.

One of her favorite refrains in recent weeks as rivals have stepped up their attacks on her is to repeat President Harry Truman's line that, "If you can't stand the heat, get out of the kitchen." And then she adds, "And I feel very comfortable in the kitchen."

Her opponents are also going after the same voters. Obama, whose support is higher among those with college degrees than less-educated Democratic women, has also geared recent campaign stops in New Hampshire and Iowa toward working-class women.

Last week he spent an hour with a handful of women at the L.A. Burdick chocolate factory in Walpole, N.H., and reminded them that he was raised by a single mother who at one point needed food stamps to get by.

He repeated the theme in a television ad about education that started airing this month in New Hampshire. "My parents weren't rich. My father left me when I was very young," he says in the ad. "The one thing I was able to get was a great education. We should give every child the same chances that I had."

John Edwards is running a highly populist campaign. He has walked picket lines with blue-collar workers, and speaks frequently about his background as the son of a mill worker in small-town North Carolina. His wife, Elizabeth, is extremely popular with female voters, and a prominent feminist leader, Kate Michelman is campaigning for him.

But there is also research showing that female candidates do better when issues that are seen as traditionally important with women, such as education, healthcare, and childcare, are dominant, said Deborah Schildkraut, a political scientist at Tufts University.

The Globe poll found that New Hampshire Democrats of both genders consider healthcare the biggest issue facing the country, ahead of the war in Iraq. Clinton has campaigned proudly on her bid to enact universal healthcare in the early 1990s, despite the fact that she failed. She also speaks often of how her first job out of law school was at the Children's Defense Fund.

"My guess is it's a combination of her experience on healthcare, and being a woman," said Schildkraut.

Ann Lewis, Clinton's top adviser on women's outreach, attributed the candidate's success with blue-collar women to her history of working on healthcare and children's issues, as well as her personal story.

"They know she's been a good mother, and that's very important to them," Lewis said. "Here's someone who's juggled a job, raised a family, and volunteered. That's what they think people should do."

Of course, the public picture of Clinton's life is more complicated. The fact that she stayed with a husband who cheated on her remains on the minds of many female voters, sometimes to her detriment, particularly among better-educated women who believe she betrayed the ideals of feminism.

"She's basically letting him walk on her," said Hope Grenier, a packager at the Burdick chocolate factory and mother of three who decided to support Obama after his visit there. "What does that say about her family values?"

Miller calls herself a "farm wife." And she loves the idea of a female president.

"Who is the one who does the dishes and gets the kids everywhere?" she said. "Women have been underestimated for years."