More Saudis are freed from Guantanamo 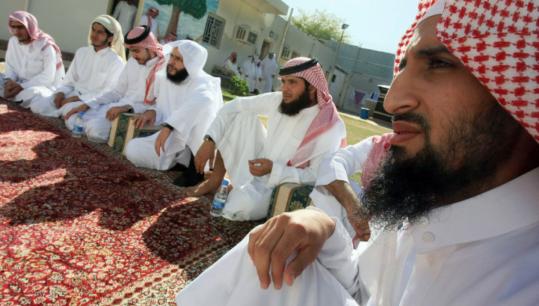 Saudi men released from the US prison at Guantanamo Bay, Cuba, as well as from prisons in Iraq and Saudi Arabia, listened recently to a Muslim cleric during a course at an Interior Ministry rehabilitation center north of the Saudi capital, Riyadh. (HASSAN AMMAR/AFP/Getty Images)
Email|Print| Text size – + By Farah Stockman Globe Staff / November 22, 2007

GUANTANAMO BAY NAVAL STATION - In May 2006, the US military delivered the news Ali Muhammed Nasir Mohammed was desperate to hear: He was heading home from the prison at Guantanamo on the next plane to Saudi Arabia.

There was just one problem. Mohammed is from Yemen. When he explained the mistake, the plane left without him. He remained in his cell for 18 months.

Mohammed's case highlights the powerful role of nationality in determining who is released from Guantanamo.

Saudi Arabia, a wealthy, influential US ally, has seen more than 100 of about 130 citizens return home from Guantanamo, including dozens a military review panel found were security threats.

But Yemen, a poor country that lacks close ties to Washington, has had only 13 of about 110 citizens repatriated, including the body of one who committed suicide. Yemen has overtaken Saudi Arabia as the nation with the most citizens in Guantanamo besides Afghanistan; about a third of the current 310 detainees are Yemeni.

US officials say Saudi Arabia has been more assertive than Yemen on the issue. Former detainees have been reintegrated into society with an expensive rehabilitation program that includes religious reeducation, psychological counseling, furnished apartments - even brides.

"Our view is that putting them in jail and throwing away the key does not solve the problem," said Nail Al-Jubeir, a spokesman for the Saudi Embassy in Washington. "They are sitting in Guantanamo Bay for the last five years, isolated from what is going on. You have to teach them right from wrong."

Begun in 2003 to reform suspected terrorist sympathizers arrested inside Saudi Arabia, the program has processed 2,000 extremists and 700 have been released, said Chris Boucek, a Princeton University researcher. Only 10 have been re-arrested, he said.

"Part of the counseling process is to encourage them to settle down and get married and have kids," Boucek said, speaking from Riyadh. "I think the thinking goes that the more family obligations that you have the less likely you are to get in trouble."

The Guantanamo returnees enter a special version of the program: They remain in custody but are allowed meals with loved ones and with the relatives of others still detained at Guantanamo Bay. The goal, Boucek said, is to reinforce a message that if they "screw up" it could ruin their friends' chances of release.

Saudi officials liken the program to an American drug rehabilitation clinic, though returnees still face prosecution for the alleged activities that landed them in Guantanamo. Several have gone to jail for falsified passports or for "joining a foreign war without authorization."

So far, Jubeir said, no former Guantanamo inmates have "relapsed" into terrorism after finishing the program.

Saudi officials would not say how much the program costs. Last month a Saudi prince gave $2,700 each to 55 recently released detainees to celebrate the holy month of Ramadan.

US officials were initially cynical, Saudi officials say, but now they point to the program as one reason so many Saudis have been repatriated.

Saudi Arabia is "willing to come up to the plate and mitigate the risk," said Frank Sweigart, head of the Pentagon office that oversees the review of evidence against the detainees. If more countries followed suit, he said, more detainees would be released "in a heartbeat."

By contrast Yemen has struggled to gain the trust of US officials, despite similar attempts at militant rehabilitation.

Run by a well-respected Yemeni judge, the program's clerics challenge the prisoners' interpretation of Islam. Unlike the Saudis' program, inmates don't get professional counseling, financial support, or social services, according to a Yemeni official who spoke on the condition of anonymity because of the sensitivity of the topic.

About 200 suspected Yemeni militants have "graduated" from the program, the official said, though no one can say whether any had returned to extremism. But Boucek said US officials became concerned after evidence that significant numbers of them were fighting alongside Iraq insurgents.

"When these guys leave custody in Saudi Arabia, they are still monitored and very, very closely tracked," Boucek said. "Whereas in Yemen, it seems like once they got people to agree that, 'Yes we recognize the legitimacy of the Yemeni government,' they would leave and that was it."

No Yemeni detainees have gone through the program because so few have returned from Guantanamo. US officials say privately that they do not trust Yemen with detainees who could still be dangerous, noting that 23 Al Qaeda members escaped from a Yemeni prison last year.

They also point to the reported release last month of Jamal al-Badawi, considered a leader of the attack against the USS Cole, a bombing that killed 17 US sailors in 2000. Press reports contended that Badawi was released after renouncing terrorism, but Yemeni officials insist he is still in custody.

So far only a dozen Yemeni citizens have been sent home, including Mohammed, who languished in Guantanamo longer than he would have had he been a Saudi Arabian citizen.

"It is frustrating to see the nationals of so many countries going back in large numbers," said Marc Falkoff, a law professor at Northern Illinois University-DeKalb who represents 17 Yemeni detainees.

Yemeni officials said that they have sent delegations to bring their citizens home, but, that their country lacks the political clout and financial resources.

"We can't compare our relationship with the US to Saudi Arabia," a Yemeni official said. "Yemen is 300,000 barrels [of oil] per day. Saudi Arabia is 10 million."