A tactic of Bush's on bills is assailed 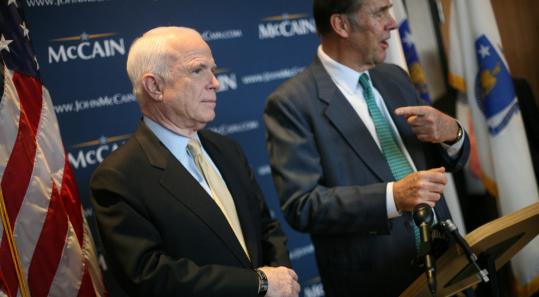 NASHUA - Republican presidential candidate John McCain denounced yesterday President Bush's use of "signing statements" to reserve the right to violate certain laws, and he vowed to abandon the practice if he becomes president.

"I would never issue a signing statement," the Arizona senator said at a Rotary Club meeting in Nashua, adding that he "would only sign it or veto" any legislation that reached his desk as president.

Hours later in Manchester, N.H., Democratic presidential candidate Bill Richardson agreed with McCain's stance, saying "I will eliminate them. I won't have one."

McCain's comments about signing statements came in response to a question from James McCormick, a 71-year-old retired businessman from Nashua. McCormick held up a pocket copy of the US Constitution and asked McCain if he believed it was constitutional to use the signing statements as Bush has done.

"It is wrong, and it should not be done," McCain responded.

The Bush administration has repeatedly defended its use of the strategy as legal and appropriate.

Several Democratic candidates have criticized Bush's use of signing statements, and earlier this year, Republican candidate Ron Paul promised to stop issuing signing statements if he wins. But McCain is the highest-profile GOP candidate to break with the administration over the issue.

In the past, McCain has expressed displeasure with Bush over the president's decision to issue a signing statement challenging an antitorture law known as the McCain Amendment.

Throughout 2005, McCain had battled the White House over his legislation, which declares that US interrogators may not use cruel, inhuman, or degrading treatment against detainees anywhere in the world. In December 2005 Congress sided with McCain, passing the antitorture law.

Bush had previously threatened to veto the McCain Amendment, but after the vote he agreed to sign it. However, when he signed the bill, Bush appended a signing statement instructing CIA and military interrogators that he had the power to authorize them to bypass the limits.

In January 2006, after Bush's signing statement came to his attention, McCain vowed to strictly monitor how the White House implemented the new law. But in yesterday's comments, McCain went further. His promise to "only sign it or veto" bills brought him into alignment with the American Bar Association, which said last year that the Constitution gives presidents two choices: Sign a bill and enforce all its provisions, or veto it and give Congress a chance to override the veto.