Similarities are seen to '02 race versus O'Brien 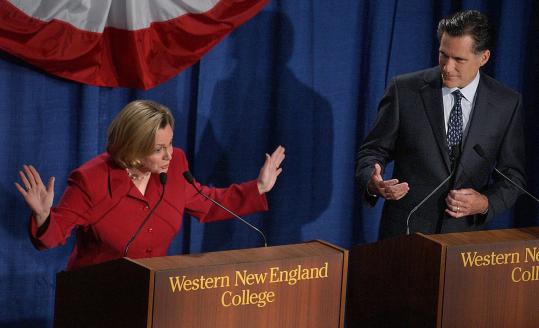 Shannon P. O'Brien and Mitt Romney faced off at Western New England College in Springfield during one of their five debates. O'Brien said she has given campaign videos of Romney, which she had kept in her basement, to the Democratic Party. (Jim Davis/Globe Staff/File 2002)
Email|Print| Text size – + By Michael Levenson Globe Staff / November 18, 2007

As Mitt Romney contemplates a potential presidential matchup next November against Hillary Clinton, his supporters believe he has a leg up: He already knows how to beat a Democratic insider, a woman with strong political connections, and a tough, well-oiled campaign operation.

Former aides say Romney's winning campaign against state Treasurer Shannon P. O'Brien in the 2002 Massachusetts gubernatorial race showed that Romney could gracefully navigate issues of gender, power, and party politics sure to arise in a contest with Clinton.

The leading GOP contenders all say they would be the strongest standard-bearer against Clinton, but Romney himself has cited the O'Brien race as proof of his ability to defeat Clinton.

But while most veterans of the 2002 gubernatorial race agree there are some similarities between O'Brien and Clinton, they say Clinton would be a far more formidable adversary because of her fund-raising ability and her experience fending off Republican attacks.

They also note that Romney's campaign in 2002 was sometimes far from graceful. Romney was accused of sexism in the final week of the race, and he went after O'Brien aggressively, castigating her as part of a "gang of three" with the Democratic leaders of the House and Senate.

O'Brien, who has endorsed Clinton, said the New York senator would never stand for such criticism.

Ben Coes, Romney's campaign manager in 2002, said Romney was initially reluctant to attack O'Brien for fear of appearing "overly mean." But he changed his mind after she ran hard-hitting ads featuring workers who had lost jobs in a plant bought by Bain Capital, the firm Romney founded.

Coes said Romney, using what he learned running against O'Brien, is taking the same aggressive posture to position himself for a possible run against Clinton.

"The lesson is we need to get tough and we need to not treat her like a woman," Coes said. "We need to treat her as an opponent and go out there and put that aside. Mitt's been through that gantlet, and I think that is going to be a huge advantage for him, where he can really deal with Hillary Clinton the opponent. He's done that before and understands the balance between toughness and sensitivity to gender."

Romney is already attacking Clinton with a television ad that says she has "never run a corner store," and he joked about "Hillary's house of horrors" just before Halloween. He is deriding her as a liberal Washington insider, an echo of the criticism he leveled against O'Brien. He also rarely mentions President Bush, distancing himself from an unpopular Republican incumbent in the same way he distanced himself from acting governor Jane M. Swift in 2002.

"The similarities are not just cosmetic," Coes said. "They really give good insights into what might happen in '08."

Romney told a group of Republican women in Nevada last month that the gubernatorial contest taught him to treat a female candidate "as a person, not a woman." "I intend to do that again," he declared, according to MSNBC.

A wealthy venture capitalist, Romney had led the 2002 Winter Olympics in Salt Lake City from scandal to success and recently been named one of People magazine's "50 Beautiful People," when GOP activists drafted him to run for governor in 2002.

After 12 years of Republican rule in the governor's office, the state was facing a budget deficit and Swift, who had become acting governor when Paul Cellucci became ambassador to Canada, was hobbled by political missteps, including a $1,250 state ethics fine for using her aides as baby sitters.

Swift wanted to run for a full term as governor, but Democrats believed they could beat her. Republicans elbowed Swift out of the race on March 17, and Romney jumped in the same day.

Romney ran as an outsider with no loyalties to the clubby Legislature and pledged to "clean up the mess on Beacon Hill." He argued that O'Brien, the daughter and wife of state politicians, would fail as a counterweight to the overwhelmingly Democratic Legislature. O'Brien touted her management of the budget and cast Romney as a profiteer.

Emboldened by O'Brien's attacks, Romney ran an ad that depicted her as a lazy basset bound who snoozed while men in suits hoisted bags of money from the state treasury into a van labeled "." (O'Brien's husband was a former state legislator turned lobbyist who had worked for Enron.) Romney also dramatized the "gang of three" attack by holding a press conference with oversized black-and-white photos of O'Brien and the state's two legislative leaders.

"He clearly was making the point that even though she's a woman - a Yale-educated, highly successful, highly intelligent woman - he succeeded in portraying her as one of the boys on Beacon Hill," said Philip W. Johnston, the former chairman of the Massachusetts Democratic Party, who is now backing Democrat Barack Obama in the presidential race. "And one would assume that kind of approach would go with Hillary."

O'Brien had talked about making history as the first woman elected governor, but it was not until a week before the election that gender exploded as a factor in the race. During a televised debate, Romney called O'Brien's aggressive performance "unbecoming." O'Brien said he would not have used the word to describe a man. Romney denied that and said he was an English major prone to using unusual words.

But gender became the main flashpoint in the race. The columnist Mary McGrory wrote that O'Brien "has always seen her tight race with the glamorous Romney as a war between the sexes and herself as an in-your-face feminist in the Hillary Clinton mode."

The day before the election, President Bill Clinton campaigned with O'Brien and Rudy Giuliani, now vying against Romney for the GOP nomination, stumped with Romney. Romney beat O'Brien by 5 percentage points.

Veterans of the 2002 race have been quietly marveling at the possibility of a Romney-Clinton race.

"It's kind of like, 'I've seen this movie before and I hope it ends the same way,' " said Jonathan Spampinato, who was Romney's deputy political director in 2002. "Clinton may be a better version of the dyed-in-the-wool Democrat, but that's just a variation of the theme."

Many observers cautioned that comparisons between Clinton and O'Brien only go so far.

"I would say that just as the men in politics are amazingly diverse, so are the women, so the notion that he's mastered the gender problem by running against one of these women is just as simplistic as saying that you would master the gender problem because you've run against Barney Frank as opposed to George Bush," said Boston College political scientist Kay L. Schlozman. "They're both white males, but, boy, are they different."

Johnston also noted the issues in the presidential race, such as the Iraq war, are much more challenging for Romney than the pocketbook issues he tackled in 2002.

"He was coming in as a kind of a white knight in shining armor to rescue the state in 2002," Johnston said. "It will be much more difficult for any Republican to do that in '08 given the Bush record."

O'Brien, now chief executive of the Patriots' Trail Council of the Girl Scouts, said she has given campaign videos of Romney, which she had kept in her basement, to the Democratic Party. Some, she said, show Romney advocating for abortion rights, a position he now repudiates. She said she has not talked directly to Clinton or her aides.

"I'm not talking to anybody," O'Brien said. "I'm basically letting Mitt Romney do the talking on video."