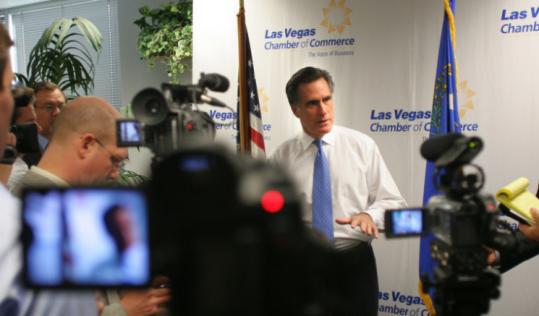 On the campaign trail in Las Vegas yesterday, Mitt Romney called the attacks on him based on his faith un-American. (Richard Brian/Las Vegas Sun via Associated Press)
Email|Print| Text size – + By Michael Levenson Globe Staff / November 17, 2007

McCain and another candidate, Rudy Giuliani, denied any involvement in the calls and condemned them as gutter politics. They are known as "push polls," calls that sound like surveys but are designed to spread negative information about a candidate.

New Hampshire law requires all political advertising, including phone calls, to identify the candidate being supported. McCain and Romney asked Ayotte to investigate, and she agreed. James Kennedy, a New Hampshire assistant attorney general, said the office would begin by interviewing the recipients of the calls. The inquiry could take weeks, he said.

In a press conference in Nevada and in an appearance on CNBC, Romney was indignant.

"The attempts to attack me on the basis of my faith are un-American," he said. "This is a time when we're preparing for Thanksgiving, a time when we're going to celebrate the fact that this nation was founded in part to allow people to enjoy religious freedom."

It was not clear yesterday who was behind the calls.

Western Wats, a Utah-based market research firm that was identified as the source of the calls by some voters who received them, released a statement yesterday saying it does not take part in "push polling."

But asked specifically if the firm placed the calls, Gordon Bishop, its vice president of business development, said in a telephone interview yesterday, "Like all of my co-workers, we sign nondisclosure agreements with our clients, so unfortunately we're not able to say who we work with, or where we do the work, or what is the nature of the research."

Two voters who received the calls said yesterday they were shaken by the questions, which at first sounded like part of an innocuous survey but quickly made darker references to Romney's Mormon faith and views on abortion.

"I just felt like it was a kind of slime campaign against Governor Romney," said Anne Baker, an independent voter and Romney supporter from Hollis, N.H., who said she received one of the calls Wednesday night.

Baker said she has participated in about five presidential campaign polls this year, so she was initially happy to take the call. The caller, she said, asked if she had a few seconds to do a political poll, and asked about her party affiliation, voting history, and whom she planned to support for president. Baker said she was supporting Romney, and the caller then asked questions exclusively about Romney, she said.

"The first four or five questions were all about the Mormon religion, like, 'Are you aware he is a Mormon?' and then, 'Did you know that they didn't allow black people to be bishops until the 1970s?'. . . And 'Did you know he got a military deferment for being a missionary?' "

The caller, she said, also asked about Romney's change from being a supporter to an opponent of abortion rights. "Every question was something that I would consider negative," Baker said.

Ralph Watts, a state representative in Iowa and a Romney supporter, said he received one of the calls Thursday night that followed a similar script, asking in part, "Some people say the Mormon Church is a cult, would that make you more or less likely to vote for Mitt Romney?" Then, Watts said, the caller delved into questions about McCain, a decorated Vietnam veteran and former POW.

"The other half was a series of questions that were very favorable to John McCain," Watts said.

McCain described the calls as "especially shameful" because they impugned Romney's religion and he asked all candidates to reject such "despicable tactics." The Arizona senator noted that he was victimized by similar push polls in the 2000 campaign in South Carolina that suggested he had an illegitimate black child.

Giuliani spokeswoman Katie Levinson said in a statement, "There is no room for this sort of thing in politics." Despite the condemnations by his rivals, Romney used the calls to attack the McCain-Feingold law, the 2002 measure coauthored by McCain that limits campaign contributions.

"The monster is this McCain-Feingold bill and it has to be repealed and it just points how in infective it has been in removing the influence of money and underhanded politics," Romney said.

Jill Hazelbaker, McCain's spokeswoman, said push polling was, "regrettably, alive and well," for years before the McCain-Feingold law was passed. "It is appalling, but not surprising, that Mitt Romney would seek to take advantage of this disturbing incident to launch yet another hypocritical attack," she said.