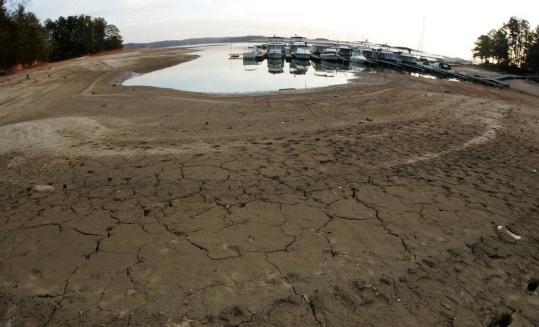 ATLANTA - Federal biologists signed off on a plan yesterday to reduce the flow of water from Lake Lanier, the main water source for Atlanta and the focal point of a three-state water fight as the Southeast contends with a historic drought.

The US Fish and Wildlife Service decided that federally protected mussels can live with less water from Lanier, which could allow drought-stricken Georgia to keep more water in the drying lake.

The Army Corps of Engineers immediately reduced the flow of water from Lanier to Florida by 5 percent, and said it could cut it by 17 percent depending on lake levels.

"We feel like we've got the most flexible system to meet the needs, from the headwaters of Lake Lanier down to Apalachicola Bay," Brigadier General Joseph Schroedel said.

Governor Sonny Perdue of Georgia has criticized the federal government for continuing what he calls excessive water releases from north Georgia reservoirs even as the drought threatens Atlanta's water supplies.

The fast-growing Atlanta region relies on the lake for drinking water. But power plants in Florida and Alabama depend on healthy river flows, as do farms, commercial fisheries, industrial users, and municipalities. The corps is also required to release adequate flows to ensure habitats for species protected by the Endangered Species Act, such as the mussels.

Florida and Alabama have balked at Georgia's effort to keep more water, arguing that its demands were unreasonable and that reducing the flows downstream could cripple their economies. Alabama seemed mollified by the corps' decision, as Governor Bob Riley said he was "very satisfied and very pleased."

But Florida environmental commissioner Michael Sole said the decision "further jeopardizes the threatened and endangered species" and "starves the overall health of the fragile ecosystem."

Federal officials said the states have promised to collaborate on a long-term water pact.

"They're all neighbors, they're all working together," Interior Secretary Dirk Kempthorne said.

Meanwhile in Washington, a panel of federal appeals judges questioned whether the corps has the authority to divide portions of the lake for drinking water instead of producing power.

In one of seven active lawsuits, lawyers for all three states argued before the panel over a 2003 settlement in which the corps agreed to allow Georgia to use nearly 25 percent of Lanier for drinking water storage.

The long-term agreement, which has not yet been implemented, is a linchpin of Georgia's water plans for the coming decades. Currently, the state gets water from Lanier under smaller, short-term contracts.