McCain's message a hard sell in the heartland

Globalization can hit a nerve with audiences 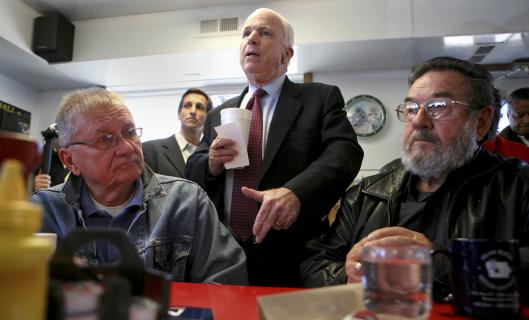 MASON CITY, Iowa - One by one the Iowans rose from their warm cider and pumpkin pie, with questions for Senator John McCain: about the Social Security benefits illegal immigrants receive; about a supposed superhighway that would run through the United States from Mexico to Canada; and about a rumor regarding something called the "North American Union" that would join the three countries under one flag.

"I can't tell you the number of town hall meetings where I've heard that," the Arizona Republican said with a frustrated chuckle the next day on his "Straight Talk Express" bus. "Now the failure is down into conspiracy theories."

The "failure" refers to the McCain-led bipartisan immigration overhaul bill to provide a path toward legal status for illegal immigrants while strengthening border enforcement. It never received enough support for a Senate vote, was dismissed by Republican opponents as a form of amnesty, and proved wildly unpopular with the GOP primary voters McCain was seeking to woo.

Yet the subject has not gone away, and it is when immigration, free trade, and subsidies come up that McCain - who will often say, "Let me give you a little straight talk" before offering up conventional wisdom such as that Social Security will one day "go broke" - finds himself most frequently delivering a blunt and unpopular message.

On issues of globalization, McCain has carved out a position without parallel in either party's primary - and one without a natural base of support among early-state voters: He is an unapologetic defender of global markets on all fronts.

"All I can tell you is I'm a free-trader, so I'm not your candidate. I'm sorry, but I'm not," McCain told a woman in Mason City who had suggested the United States cut off all imports from China following the arrival of unsafe toys from the country. "I'm sure there are a lot of protectionists running for president on the Democrat ticket."

While McCain's three top Republican opponents support free-trade pacts, all have argued for a harder line in confronting immigration. McCain's role in pushing the "comprehensive immigration bill" prompted a conservative backlash against the senator, damaging his ability to raise money and pushing his campaign into debt.

"The reality is it wasn't our financial problems that caused our drop in the polls," he said in an interview. "It was immigration. That's just a fact. I can show you the polling data to prove it."

Tight on cash, the campaign has now stopped its polling altogether. Public surveys show mixed evidence for assertions the campaign has made of a McCain comeback: He is stuck in the middle of the pack in early states where he once led, although three national polls this week showed him moving into second place, behind Giuliani. "Any port in a storm," the Navy veteran joked as he cited one of them to reporters.

The campaign says its fund-raising has picked up slightly, and that it was able in early October to reinstate Internet advertising - on news sites and conservative publications like the Weekly Standard - that it had cut off in February due to cash flow.

While McCain advisers concede they blew through a lot of money on the trappings of a front-runner's campaign, they also say that their early spending on the nuts and bolts of a voter-contact operation - voter files, e-mail lists, and databases - will pay off.

"The infrastructure is in place. You might not have as many people to run it, but it's there," said Max Fose, a longtime McCain consultant who left the campaign during the July restructuring.

The campaign now has about half the staff in Iowa as it did earlier in the spring, but a large team of volunteers remains mostly in place. "We have almost every county in Iowa organized," said national campaign manager Rick Davis.

Still, McCain appears to be traveling to many of those counties with positions on economic issues many voters do not particularly want to hear. If there is a theme to his campaign, it seems largely to be as a bulwark against the "rising tide of protectionism" he says he has noticed nationwide, which an aide says has national-security ramifications.

"He sees these trade links as a way of building alliances," said senior policy adviser Douglas Holtz-Eakin. "This is our freedom spreading across the world."

It is part of a broader internationalist message that stands McCain apart from his Republican rivals. McCain frames even his disagreement with them over waterboarding detainees as a crisis of American integration into the world. If the next president accepted the practice of torture, McCain warned, "We will have to withdraw from the Geneva Conventions."

In Iowa, McCain reiterated his opposition to the popular local cause of subsidies and protective tariffs to aid production of biofuels - as a matter of unfettered global competition. "I trust Americans. I trust the markets. And I oppose subsidies," he said.

Some political analysts suggested that there is not a natural home for such an appeal.

"It's a lot easier to win running against the rest of the world," said Andrew Smith, director of the University of New Hampshire Survey Center. "I don't think there's any natural constituency for a pro-globalization position, other than the business community, but there are not enough of them to matter."

McCain acknowledges global pressures have cost US manufacturing jobs that are "not coming back," and he supports modernizing unemployment insurance and worker retraining programs. Nonetheless, he cites the surfeit of $3 stackable lawn chairs at and the fact that "50,000 Americans today make their living off " to show the benefits of the global marketplace.

But in place of the special interests he villainized in his lively 2000 campaign, there is often no foil for McCain's enthusiasm other than the voters whose minds he seems unable to change.

At a lunchtime gathering at an Iowa Falls restaurant on Monday, a white-haired woman in a red sweater raised her hand. "My question is about illegal immigration," she said.

"This meeting is adjourned," McCain deadpanned to laughter.

"I heard a lot of stories," she said, before recounting something her son in California had told her about "Mexican flags flying, with American flags underneath and upside down."

She asked, "How much support are we going to give them?"

McCain tried to explain that those in the country illegally were not eligible for Social Security benefits, but she looked blankly back at him.

"I understand your concern, I understand the issue," McCain replied. "Thank you for your question, and you're obviously still unhappy, but that's the best I can do."