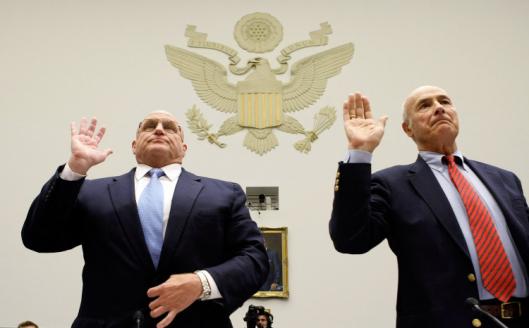 WASHINGTON - The next US president must expand American involvement in the United Nations and other international bodies and dramatically increase foreign aid - especially among Muslim countries - to reverse the steep decline in American influence and enhance national security, a bipartisan group of politicians, business executives, and academics said in a report yesterday.

The report, titled "A Smarter and Safer America," also condemned what it called the American "exporting of fear" since the Sept. 11, 2001, terrorist attacks, and criticized the use of "hard power," military might, as the main component of US foreign policy instead of the "soft power" of positive US influences.

"America may be less regarded today than at any time in its history, but it is not too late to reverse these trends, even in the Arab and Muslim World," reads the report, created with assistance from hundreds of specialists around the world.

To reach that goal "will require a strategy that strikes a new balance between the use of hard and soft power" to create "a smarter approach to the main challenges facing the United States and the global community," the report says.

Both Democratic and Republican lawmakers on Capitol Hill said they hoped the report would spark a national debate about America's changing global role.

"Ours is a foreign policy adrift," said Representative John F. Tierney, a Salem Democrat and chairman of the House subcommittee on National Security and Foreign Affairs, who convened a hearing on the report yesterday.

John Hamre, president of the Center for Strategic and International Studies in Washington, established the committee a year ago to update what he considers a narrow approach to world affairs and global Islamic extremism. He said President Bush's successor desperately needs a fresh, comprehensive strategy for protecting America's global interests - one that utilizes the nation's full range of political and economic strengths and helps reclaim its moral authority.

The widely unpopular Iraq war is just one reason the United States' image abroad has become severely tarnished in recent years, according to the report. Some nations resent America's role as the sole global superpower, while others criticize it for not sharing the economic benefits of a trade globalization system it engineered.

America's decisions to bypass several key international agreements and treaties in recent years are a factor, along with what the report called a "simplistic" response to the Sept. 11 attacks - an us-or-them mentality that the report said led to secret detentions, warrantless electronic surveillance, and interrogation techniques some consider tantamount to torture.

The report said Cold War-era examples of America's technical superiority and world leadership - such as eradicating smallpox and putting man on the moon - have been replaced by images of its stumbling response to the Hurricane Katrina disaster and its inability to restore basic services in Iraq.

Political partisanship aside, "Americans are unified in wanting to improve their country's image in the world and their own potential for good," Hamre wrote in the report's introduction.

The United States needs a new global strategy, much as it did at the start of the Cold War in the early 1950s, according to the report. The goal then was to contain communism through military power, but also through good works around the world that won praise even in nations considered enemies of the United States.

The "smart power" strategy outlined in the report yesterday includes US participation in international treaties and alliances, emphasizing global development and health, and encouraging international investment in new energy technologies.

The United States must recommit itself to a "new mutlilateralism," working with other countries to strengthen international institutions such as the United Nations, the World Bank, and the World Trade Organization.

Over the years, America has moved away "from a focus on the importance of working through international institutions," former Republican senator and panel member Nancy Kassebaum Baker said yesterday.

In addition, the United States should dramatically increase foreign aid and make global development a foreign policy priority, according to the report. Though the total amount of US foreign aid is larger than that from some other developed countries, it is a much smaller percentage of its gross domestic product when compared with the other countries'.

One specific recommendation is the creation of a Department of Development' an agency on par with the Departments of State and Defense.

Another key recommendation is to change how the United States communicates with the rest of the world. Too often the nation has used "the rhetoric of fear and anger" when stating its foreign policy, said Armitage, who served during Bush's first term. "We have to get back to exporting more traditional American values."