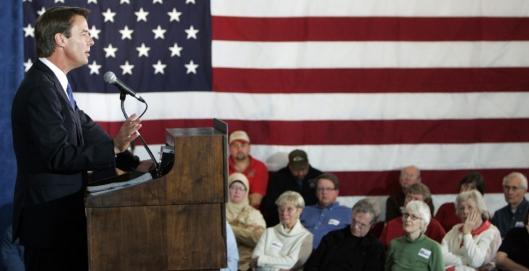 John Edwards campaigned in Iowa yesterday. His attacks on Hillary Clinton seems to target her integrity - suggesting she is compromising on her principles to get elected. (Jim Slosiarek/Associated Press)
Email|Print| Text size – + By Peter S. Canellos Globe Columnist / November 6, 2007

DES MOINES - John Edwards is a man on a mission - to expose the vagaries and equivocations of Hillary Clinton.

All last week, the former North Carolina senator raised the level of his attacks on a woman he has portrayed as too willing to continue the war in Iraq, too quick to set in motion the forces that could lead to war in Iran, and too much a part of a "broken system that's corrupt in Washington."

His real target seems to be her integrity - suggesting she is compromising on her principles to get elected, both by softening her stances on issues and submitting to the ways of Washington.

It's a powerful critique, rooted enough in what voters have seen of Clinton that it just might succeed in handing the Democratic nomination to Senator Barack Obama of Illinois.

Presidential politics has produced this kind of multisided pool shot before - just four years ago, in fact - and Edwards was, briefly, a beneficiary.

Back then, former Vermont governor Howard Dean had dominated the Democratic race with his scathing critique of President Bush. Dean was inveighing against the Iraq war at a time when his main rivals, including Edwards, Senator John F. Kerry, and former House minority leader Dick Gephardt, were all lying low, having voted to authorize the use of force in Iraq.

Eventually, Dean's rivals turned against the war, and some picked up on other themes inaugurated by Dean, such as his rejection of Bush's No Child Left Behind law. Still, there remained the problem of what to do about Dean himself, who was leading in all the polls with just weeks until voting began.

Each contender took a different approach. Edwards refrained from direct attacks, but emphasized his positive message as a contrast to Dean's anger. He promised voters he would tell them "what I'm for, not what I'm against."

Kerry took a middle ground, remaining largely above the fray, but rarely missing an opportunity to portray Dean as rash and extreme, to the point of ignoring America's interests. When Saddam Hussein was captured and Dean predicted it would make no difference in the Iraqi insurgency, Kerry portrayed it as a crazy statement from a dangerous ideologue.

Gephardt went the furthest, criticizing Dean directly in debates and running a fusillade of TV ads directly targeting Dean in Iowa. The attacks had great impact, partly because Gephardt was a respected figure in Iowa, from a neighboring state, with a reputation in some circles for well-considered moderation.

But in the process of taking down Dean, Gephardt shattered what was most attractive about his own candidacy - that sense of maturity and measured judgment - and plunged to the bottom of the pack. Instead, Dean's legions of supporters moved to Kerry and Edwards, both of whom soared in the polls in the days leading up to the Iowa caucuses and finished a strong one-two.

Edwards didn't win the nomination, but finished well enough to become Kerry's pick for vice president. Gephardt, who was much closer to Kerry, was apparently too tainted by his negative campaigning.

This year, Edwards has been much more of an attacker, expressing his outrage over the Bush administration in terms that would make Dean, who is now the chairman of the Democratic National Committee, proud. And it seemed from the start that it would be only a matter of time before Edwards would take aim at Clinton, the second-term New York senator and former first lady, who has run a much more measured campaign, stressing her experience and expertise.

Now he has, and the former trial lawyer clearly relishes the role. Last month, he led the attacks on Clinton's vote to declare Iran's Revolutionary Guard to be a terrorist organization. Last week, he jumped on her unwillingness to take a stand on giving drivers' licenses to illegal immigrants.

"Unless I missed something, Senator Clinton said two different things in the course of about two minutes," he said.

Edwards might be making some headway if this were a two-person race, Edwards against Clinton. But it's not, and Obama, who has maintained a Kerry-like posture, is ready to reap any of the votes that Edwards succeeds in peeling away from Clinton.

There are many reasons to believe that Clinton won't collapse like Dean. She's a far more disciplined candidate. And unlike Dean, who was a new face to most voters, Clinton is the best-known person in the Democratic field. Her supporters seem to know what they're getting.

But if she falters, Obama - not Edwards - is the most likely to benefit.

Peter S. Canellos is the Globe's Washington bureau chief. National Perspective is his weekly analysis of events in the capital and beyond.