Skips some facts on healthcare law 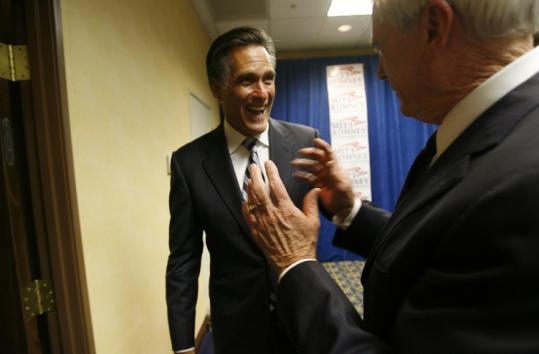 On the presidential campaign trail, Mitt Romney points to healthcare reform as his major achievement as Massachusetts governor, presenting the plan as an example of how he used conservative principles to provide affordable health insurance for all state residents without a government takeover.

But he does not mention aspects of the plan that may hold less appeal for his Republican audiences. For example, he decries "socialized medicine" and says the Massachusetts plan is "all a private initiative, a private-based, market-based healthcare" -- omitting the fact that the state and federal governments subsidize much of the overall cost and that a public board negotiated the benefits and prices that private insurers now offer.

He wows audiences by telling them that premiums for individuals dropped from $350 a month to $175 a month, without clarifying that those figures are for the lowest-cost plan available for 37-year-olds and without mentioning that for many people, especially the elderly, premiums can be several hundred dollars more.

And he sometimes downplays the role that Democrats on Beacon Hill had in putting together the final plan.

The Massachusetts healthcare law is exceedingly complicated, and it would be difficult for Romney to explain all the nuances in a town hall-style meeting, or in TV or radio advertisements.

"What's important about the Massachusetts healthcare law is that it's working, and Mitt Romney got it done by reaching across the political aisle," Romney spokesman Eric Fehrnstrom said yesterday. "We have fewer uninsured, the cost of policies is coming down, and more and more people are taking personal responsibility for their own healthcare."

His campaign also points out that the plan has been praised by conservative groups such as the Club for Growth. Representatives from The Heritage Foundation worked with Romney on the plan and joined him for the bill signing.

Fehrnstrom said Romney plans to give a major healthcare speech on Friday to the Florida Medical Association in which he will discuss "the lessons learned in Massachusetts and how he can apply those . . . on a national basis."

"He will go into much greater specifics than he does in his stump speech," Fehrnstrom said.

But some of Romney's critics and political foes -- all strong supporters of the state's healthcare law -- say he is resorting to tricks used by candidates trying to put the best spin on their records: accentuating the positive, deleting difficult details, and taking too much credit.

"It is a creative reconstruction of the law and what actually happened . . . to fit his needs" in the presidential race, said John McDonough, executive director of the advocacy group Health Care For All.

Healthcare isn't the only area where Romney has tried to polish his record. As he explored a presidential bid, he said he turned a $3 billion budget deficit into a surplus without raising taxes, even though state officials and independent analysts have said that the deficit figure was a projection and was overstated and that Romney used fee increases to close the gap. Yesterday, he began airing a radio advertisement that suggests he cracked down on illegal immigrants by getting the authority to have State Police arrest them -- without noting that the policy was rescinded by his successor, Governor Deval Patrick, before it ever took effect.

On the stump, Romney uses the healthcare issue to argue for what he calls "conservative change," contrasting the Massachusetts healthcare law and what he calls "Hillary care," referring to Democratic contender Hillary Clinton's failed attempt to create a universal system during her husband's first term as president.

Under the Massachusetts healthcare law, which requires every adult to have health insurance, the state does not provide insurance directly to people.

But some of those involved in the creation of the Commonwealth Health Insurance Connector, an independent public authority that oversees the state's health coverage policy, said yesterday that it is hard to ignore the large government role in the new system. The connector board merged the state's insurance market for individuals with the market for small businesses and associations, mandated minimum coverages, set a $2,000 limit on deductibles, and, by next year, will require insurers to cover some prescription drugs.

And the hundreds of millions of dollars a year it will cost to subsidize insurance for those who cannot afford it will be collected by the state from the federal government, from taxpayers, and from the existing free care fund for indigent patients, which is financed by levies on hospitals, insurers, and other sources.

"It utilizes a lot of private-sector aspects, but it certainly is not totally or even significantly private sector," said Senator Richard T. Moore, a Democrat from Uxbridge who cochairs the Joint Committee on Health Care Financing.

The key to lowering prices, Romney tells campaign crowds, is ridding insurers of costly government mandates. But those involved in drafting the law say most of the drop in prices resulted from a combination of political pressure on insurance companies, restrictions on access to specific healthcare providers, and the consolidation of the small-group and individual markets.

Romney has also implied that the new insurance law banned insurers from rejecting anyone based on a preexisting condition.

Dick Powers, a spokesman for the Commonwealth Connector, said, however, that the state's prohibition on rejecting applicants became law in the 1990s, before Romney was governor.

Romney likes to use the healthcare law as a way of talking about how he worked in a bipartisan manner with the Legislature to get important legislation passed.

It is a characterization disputed by many Democrats, especially because Romney vetoed an assessment on businesses that do not provide adequate health coverage for employees. The provision, charging these employers up to $295 per worker per year, was critical to the compromise reached by the House and Senate, and legislative leaders were incensed that Romney vetoed it. The Legislature swiftly overrode the veto. Romney rarely, if ever, mentions the assessment on the stump.

"On healthcare, it's nothing new from Mitt Romney -- he supports our law when it suits him and runs away from it when it benefits his political ambition," House Speaker Salvatore F. DiMasi said in a statement yesterday. "His vetoes gutted the very essence of the bill, and if his ideas stood, the number of uninsured in Massachusetts would have only grown. It's fairer to say our bill, with the hallmark provision of shared responsibility from individuals, employers, and providers, became law despite Mitt Romney, not because of him."

Alice Dembner of the Globe staff contributed to this report. Lisa Wangsness can be reached at lwangsness@globe.com.