Steel plates may be design flaw in Minn. bridge collapse

Other structures could be at risk 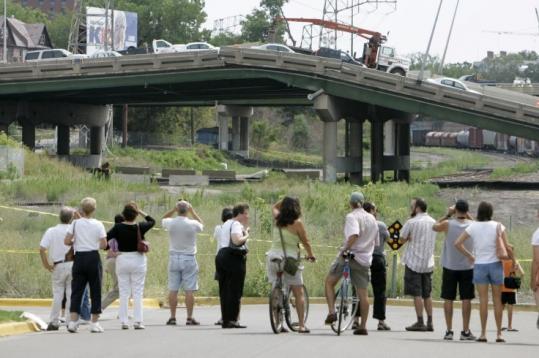 MINNEAPOLIS -- Investigators have found what may be a design flaw in the bridge that collapsed here a week ago, raising safety concerns for other bridges around the country, not just those similar to the design of the one here, federal officials said yesterday.

The Federal Highway Administration swiftly responded by urging all states to take extra care with how much weight they place on bridges when sending construction crews to work on bridges. Crews were doing work on the deck of the Interstate 35W bridge when it gave way, hurling rush-hour traffic into the Mississippi River and killing at least five people.

The National Transportation Safety Board's investigation is months from completion, and officials in Washington said they are still working to confirm the design flaw in the steel gusset plates that connect girders and what, if any, role it had in the collapse.

Still, in making public their suspicion about a flaw, the investigators were signaling they consider it a potentially crucial discovery and also a safety concern for other bridges. Gusset plates are used in the construction of many bridges, not just those with a similar design to the one here.

"Given the questions being raised by the NTSB, it is vital that states remain mindful of the extra weight construction projects place on bridges," Secretary of Transportation Mary E. Peters said in a statement issued late yesterday.

Concerns about the plates emerged not from the waters of the Mississippi River here, where workers have only begun to remove cars and the wreckage with cranes, but from scrutiny of the vast design records related to the steel truss-type bridge.

In Minneapolis, state transportation department officials seemed stunned by the sudden focus on the bridge's gusset plates, which are the steel connectors used to hold together the girders on the truss of a bridge. On this bridge, completed in 1967, there would have been hundreds of them, officials here said.

Gary Peterson, the state's assistant bridge engineer, said he knew of no questions that had ever been raised about the gusset plates, no unique qualities to distinguish them from those on other bridges, no inkling of any problem during decades of inspections of the bridge.

"I don't know what this could be," Peterson said. "I'm frankly surprised at this point. I can't even begin to speculate."

If those who designed the bridge in 1964 miscalculated the loads and used metal parts that were too weak for the job, it would recast the national debate that has emerged since the collapse a week ago, about whether enough attention has been paid to maintenance, and raises the possibility that the bridge was structurally deficient from the day it opened. It does not explain, however, why the bridge stood for 40 years before collapsing.

In an announcement, the safety board said its investigators were "verifying the loads and stresses" on the plates as well as checking what they were made of and how strong they were.

State authorities here said the plates were made of steel, and were, in most such bridges, shaped like squares, 5 feet by 5 feet, and a half-inch thick. Such plates are common in bridge construction as a way to attach several girders together.

Federal authorities indicated that one added stress on the gusset plates may have been the weight of construction equipment and nearly 100 tons of gravel on the bridge, where maintenance work was proceeding when the collapse occurred.

In a separate development in Washington yesterday, Representative Jim Oberstar, Democrat of Minnesota, the chairman of the House Transportation Committee, proposed a 5-cent increase in the federal gasoline tax to establish a new trust fund for repairing or replacing structurally deficient highway bridges.

Oberstar said the trust fund would be modeled on the federal Highway Trust Fund, which pays for building and repairing roads and bridges through a federal excise tax on gasoline that is now 18.3 cents a gallon. Revenue from the nickel increase -- about $25 billion over three years, according to the representative -- could not be used for any other purpose than bridges.

In Minneapolis, divers from the Navy and the FBI joined local police divers in the effort to recover eight people who remain missing and are presumed dead. Officials said they expected removal of heavy debris to begin later than expected to give the divers time to do their work.

The gasoline tax plan offered yesterday was immediately criticized by Florida Representative John Mica, the senior Republican on the House Transportation Committee, who called it a "Band-Aid approach." But Oberstar said he hoped the idea might win support from President Bush, who opposed a 5-cent increase in gasoline taxes two years ago and vowed to veto it. Last week, Minnesota Governor Tim Pawlenty, a Republican, said he is willing to reverse his longstanding opposition to a state gas tax increase.