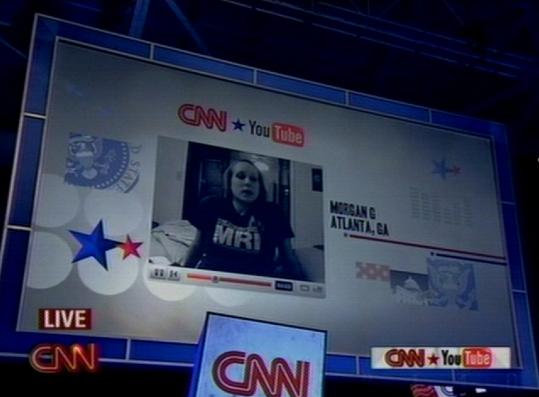 Monday's debate gave YouTube users a chance to post video questions and have them answered by the candidates. CNN said 407,000 viewers in the 18-to-34 demographic watched the debate. (CNN via Associated Press)
By Joanna Weiss Globe Staff / July 25, 2007
Text size – +

The emphasis is on "a few" because the ratings numbers were modest, by television standards. But CNN said its ballyhooed Democratic debate, held at The Citadel in Charleston, S.C., drew 407,000 viewers in the coveted 18-to-34 demographic, compared with 368,000 for CNN's traditional June debate in New Hampshire. The YouTube debate drew 2.6 million viewers overall, a decrease of 6 percent from CNN's debate in June.

CNN is touting the numbers as a victory for youth participation. But the modest increase also shows that newfangled technology does not always translate from one medium to another. And it points out the difficulties in trying to corral YouTube's freewheeling spirit into a far more strait-laced format.

The debate was a way of "opening up the doors for users to participate," said Mary Madden, a senior research specialist at the Pew Internet & American Life project. "But you still have a sort of curated, edited space, and it's still a very highly orchestrated event."

Indeed, the way CNN selected questions -- rejecting those posed by children, for instance -- has drawn a bit of fury online and has prompted some renegade action. Madden said one viewer set up a website where users could vote on their favorite questions.

That is just one of the differences between the YouTube spirit and the top-down constraints of television. YouTube is also a decidedly youth phenomenon: According to Hitwise, a firm that measures online traffic, more than a quarter of the website's viewers -- 26.5 percent -- are 18 to 24. More than half of the site's viewers earn less than $60,000.

But among the online set, YouTube has power. Hitwise says it draws more visits, defined as time spent on a site without 30 minutes of inactivity, than all of the broadcast television websites combined.

Even so, Madden said, the CNN debate drew only modest participation from YouTube users. Only 3,000 people submitted questions, she said, and some of them seemed to be mobilized by outside groups. Madden noticed, for instance, that several Planned Parenthood submissions seemed to be filmed in front of the same backdrop.

She expects future YouTube debates to draw more submissions. And she expects the old media to help spread the word. She points to a study this month by the Pew Research Center for the People & the Press that looked at exposure to four campaign-related viral videos that made the YouTube rounds: Hillary Clinton's "Sopranos" spoof, the dancing "Obama Girl," a clip of John Edwards brushing his hair, and a clip of John McCain joking about bombing Iran.

The study found that more people saw the videos on television than actually viewed them online.