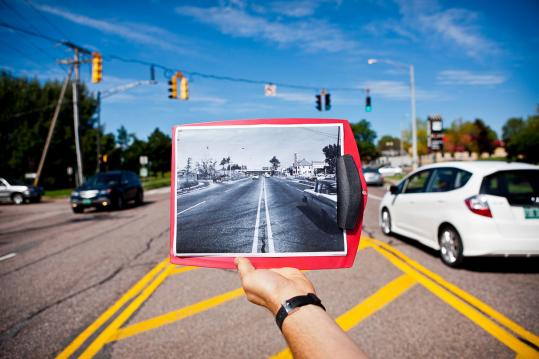 A historic photo of Route 7 in South Burlington leading to an I-89 connector shows how different the area is today. The interstate led to commercial development there. (Corey Hendrickson for The Boston Globe))
By Brian MacQuarrie Globe Staff / September 25, 2011

To University of Vermont researchers, the answer is an almost giddy yes. That’s because, tucked away in plain manila envelopes in a corner of the state archives, more than 36,000 images have been found that chronicle - before, during, and after - the greatest public-works project in state history.

Good or bad, boon or blotch, the impact of the highways on a rural state long known for its beauty and independence will be analyzed by the UVM team in the only study of its kind in the nation.

“It’s been a blast to work on,’’ said Paul Bierman, a University of Vermont geology professor who directs the project, which has received $200,000 from the National Endowment for the Humanities. “You can learn a lot about the future by looking to the past.’’

The highways, built from 1957 to 1978 in a massive feat of earth-moving and engineering, paved the way for tourists to flock to Vermont in new and faster ways. The state’s famed ski areas, served by special trains for years, could cater to the automobile. In 1958, officials counted 2,600 visits to state parks. By 1968, 10 new parks had been added, and visits skyrocketed to 126,000.

“One of the favorable impacts is that it has allowed tourists and truckers to reach Vermont easily,’’ said Mark Hudson, executive director of the Vermont Historical Society. “I guess, from some perspectives, that can be a mixed blessing.’’

The interstates, for all their transit benefits, cut across farms, bypassed towns, hurt some small businesses, and drastically changed the Vermont landscape. Where bucolic farmland had been tilled for generations, looping interchanges and suburban development began to leave a footprint.

Bierman said the study is happening at an important time, as President Obama seeks to boost employment through major infrastructure projects and transportation is being dramatically reconsidered to reduce dependence on fossil fuels.

In 1943, more than a decade before interstate construction began, only 9 percent of Vermont’s road surface was paved. Today, only 45 percent has pavement in a state that retains a profoundly rural feel despite its proximity to Boston and New York.

Its major highways include Interstate 89, which stretches from White River Junction on the New Hampshire line to Canada south of Montreal; I-91, from the Berkshires in Massachusetts to the Quebec border in northeast Vermont; and a short spur of I-93 from New Hampshire to nearby St. Johnsbury.

Jamie Russell Villanueva, the study’s manager, said the archive images - many of which are 4-by-5-inch negatives never developed or seen by the public - provide a trove of comparisons of the Vermont landscape, then and now.

The tens of thousands of photos, a staggering collection for a public-works project in such a small state, were taken in part to provide visual evidence in eminent-domain disputes. State officials went to these lengths, Villanueva speculated, because of the close bond between Vermonters and their way of life.

Now, instead of being relegated to an archive’s lonely shelving, these images will have a permanent and Web-accessible place in Vermont’s historical record. Once researchers realized what they had found, Villanueva said, the importance was obvious.

“We can’t leave this sitting in the basement,’’ Villanueva recalled thinking. “We have to let people see it.’’

“It’s a fantastic collection,’’ said Scott Riley, a Vermont state archivist. “As a state, there are ongoing discussions about how do we balance development? How do we balance that with conserving the environment? This certainly informs those discussions.’’

To play a role in those talks, the images will be included on the university’s Landscape Change Program website - uvm.edu/landscape - where they will join 40,000 photographs of general historical interest collected during the last decade. Vermonters and anyone else will be able to search for photos of towns, scenic vistas, covered bridges, and even specific street addresses.

The researchers, including more than 40 students, plan to travel the state, visiting fairs and libraries, to discuss and show images of the construction. They also plan to provide photos and commentary for signs at rest stops along the highways. Further analysis of the images will be given to a graduate student for formal study of the highways’ impact.

So far, Bierman said, the photos shown at public presentations have prompted gasps from the audiences. The Vermont of the 21st century, at least along the interstates, is a different place from a half-century ago. How different remains to be considered.

The professor, however, has reached this conclusion about I-89, the interstate that connects his Burlington office with the rest of the world.