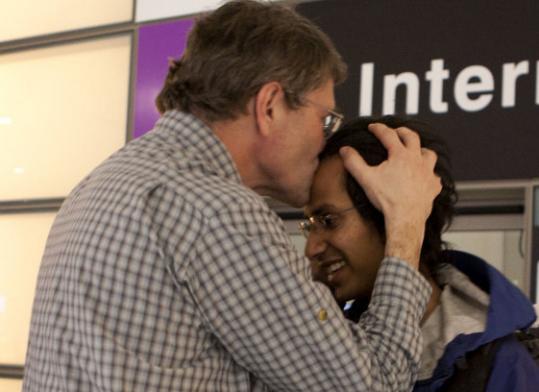 Last month, after telling a friend he was going to check out the Old City of Damascus, Pathik “Tik’’ Root became one of an unknown number of people who suddenly disappeared as demonstrations began rattling the authoritarian regime that has long ruled Syria.

The parents of the 21-year-old Middlebury College junior from Ripton, Vt., who went to Syria to study Arabic, had no idea whether their son was alive. They spent the past two weeks making call after call to congressmen, senators, ambassadors — anyone who could help find their son and bring him home.

Yesterday, a week after Syrian officials acknowledged that Root had been taken into custody and after long negotiations to establish he wasn’t a CIA agent or some other covert operative, Root caught a flight from Damascus to London and then another to Logan International Airport. There, he emerged from customs about 7:15 p.m. with a beaming smile and fell into the arms of his parents.

“I’m just shocked,’’ he said. “Thirty-six hours ago, I was in prison. I’m just trying to comprehend all of this. I’m just really, really glad to be back.’’

His parents fought tears as they tried to size up their son, who was much thinner than when they last saw him, with long, disheveled hair and heavy eyes. They tried to grasp the horror of the ordeal he said he had been through, locked in a prison cell in Damascus, with no way to communicate with anyone.

“I’m overwhelmed,’’ said Tom Root, his father. “Before this, I had very little information. It’s 10 times worse to know what he went through. I just wish I could have taken his place. I can’t imagine how he got through it.’’

Andi Lloyd, his stepmother, added: “We’re just elated right now. I’m just very happy to have my son and my life back.’’

In an interview at the airport last night, Pathik Root explained how he was wandering around the Old City after Friday prayers ended on March 18 as hundreds of people began flooding out of mosques. He had just bought some chicken shwarma when he caught sight of some flags and heard chanting.

Then he made the fateful mistake of taking out his BlackBerry to take some pictures.

Seconds afterward, several plainclothes members of the secret police grabbed him, he said. One tried to drag him by his hair. He explained that he was an American, and the men threw him in the back of a Chevy Suburban.

When he showed his passport, it made things worse. The worldly young man, who studied politics and economics and has long been fascinated by the Middle East, had previously visited Saudi Arabia, Yemen, and Egypt, all of which had stamped his passport.

They told him there was no problem, but then shoved his head down in the back seat. Five secret police officers crowded into the vehicle and drove him to a prison in Damascus. He never learned its name.

“I had no idea what was going on,’’ he said. “I was just glad they hadn’t beaten me. There were clubs in the back of the Suburban.’’

They brought him into an office at the prison, where he was blindfolded. He was later interrogated at least four times, he said.

“They threatened violence if I didn’t admit to being a CIA agent or a journalist,’’ he said. “They said it would only take 10 minutes for me to start talking after they used violence.’’

Root said he told them the same thing, repeatedly.

“I said I was a student at the University of Damascus, studying Arabic,’’ he said. “I was glad I was wearing a Middlebury College sweatshirt.’’

When he asked why he had been arrested, they told him, “It was because of the picture, and that I was a CIA agent.’’

For his first week in custody, he was kept in a dank, tiny cell with one other man, a Syrian. They strip-searched him and took his shoelaces and the string from his hooded sweatshirt. He said the cell was about 3 feet by 7 feet and windowless. The only time he was allowed out, he said, was to go to the bathroom three times a day.

“They didn’t like it if you took very long,’’ he said.

Root said they slid his meals through a peep hole in the cell door. He ate only bread and potatoes for the 15 days he was in custody, and didn’t discover there was water until he asked for it on his third day. He said he was never allowed to shower.

But the worst part, he said, was hearing the screams. He said he was sure the prison was using electricity and clubs to torture the other prisoners. He said he met a man who was beaten for putting an X over a picture of President Bashar al-Assad’s face.

“I was not beaten, but I would say at least 75 percent of those in the prison were,’’ he said.

He said he slept on blankets on the floor of his cell and fought boredom by sleeping as much as possible, which wasn’t easy. “I would write stuff on the walls,’’ he said.

Root didn’t know he would be released until the moment on Friday when he saw an official from the American embassy in Syria, and even then he wasn’t sure.

“Every day, they told me I would be released, and it wouldn’t happen,’’ he said. “I was pretty numb most of the time.’’

He worried that his arrest would become a political issue and that he could be confined for years, as happened with the young American hikers who were arrested several years ago in Iran.

“I was not convinced I was going to get back until I was here on the ground,’’ he said.

When asked what he takes away from the experience, he said: “People need to know that these kinds of governments exist in the world, the ones that torture their citizens,’’ he said.

Asked if he would ever return to the Middle East, he said he would one day.

“This experience, as bad as it was, has in no way dampened my interest in these countries, in their cultures and their people. There’s a big difference between the government and the people.’’

Root has no immediate plans, he said. “I’m just going to go home and sleep as much as possible.’’

He and his family said they couldn’t thank enough those who helped free him. Chief among them, they said, was Senator Patrick Leahy of Vermont, who early Friday morning was the first American official to learn that Root was to be freed.

Leahy had received a call while still in bed from the Syrian ambassador in Washington, Imad Moustapha.

“I was happy to be awoken with such good news,’’ Leahy said in a telephone interview.

He said Moustapha, as well as US Ambassador Robert Ford in Syria, had been very helpful in securing Root’s release.

Leahy said Root, who had been adopted from India, seemed suspicious to the Syrians, because he had been studying in Yemen last summer and then was an exchange student in Alexandria, Egypt, until the protests in January made it unsafe to stay. He had moved to Syria 10 days before his arrest.

“They weren’t sure who he was, and why he was there,’’ Leahy said. “But I explained that it was just a case of being at the wrong place at the wrong time.’’

He said US officials relied on the goodwill of the Syrians. “We couldn’t make a whole lot of demands, because that wouldn’t get us anywhere,’’ he said.

He said Syrian officials kept him posted about Root’s condition, but wouldn’t say where he was being held. The Americans, he said, offered nothing in return for freeing Root.

“There was absolutely no quid pro quo,’’ Leahy said.

Leahy said Root’s release was finally secured after held a meeting with a senior official in the Syrian government on Thursday.

He also praised Root’s parents, both of whom teach biology at Middlebury College, saying their devotion to their son “has deeply touched every Vermonter who has stood with them.’’

Root’s freedom also brought a huge sigh of relief to officials at Middlebury, where friends set up a Facebook page and have been waiting anxiously for him to return.

“Needless to say, everyone here at Middlebury is both relieved and delighted that Tik has been freed,’’ said Ron Liebowitz, the college’s president, in an e-mail. “We now wish to give Tik and his family the support and space they need following this intense ordeal.’’