Vt. man is being held by authorities amid rising unrest 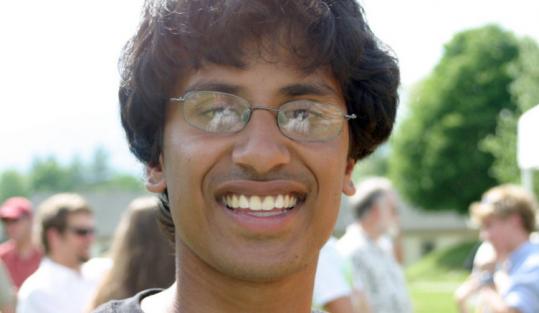 Pathik “Tik’’ Root, a college junior, was studying Arabic at a school in Syria when he disappeared.
By David Abel Globe Staff / March 27, 2011

A 21-year-old Middlebury College student who recently disappeared while studying Arabic in Syria has been found in the custody of Syrian authorities, his father said yesterday.

Pathik “Tik” Root vanished shortly before noon on March 18 after telling his new roommate in Syria that he planned to check out the old city in Damascus.

Root, an exchange student who left his school in Alexandria, Egypt, after protests in January made it unsafe to stay, moved to Syria this month to continue studying Arabic. He was aware of the budding unrest in Syria, which in recent days has grown into massive demonstrations in which authorities have reportedly killed dozens of people.

“He was following the situation, and we talked about how he should be careful,’’ said Tom Root, his father, in a phone interview from his home in Ripton, Vt. “Things were starting to heat up, but we thought that because the Syrian government was so repressive, they would control everything. We had no indication that Syria would be swept up in what was happening elsewhere in the Middle East.’’

The college junior, who majors in international politics and economics, disappeared that Friday. His parents think their son was arrested while Syrian authorities broke up a protest that day following afternoon prayers at mosques in the old city.

Root’s father said Vermont Senator Patrick Leahy called him yesterday to tell him that the Syrian ambassador in Washington, D.C., confirmed that his son was in Syrian custody. The ambassador apparently could not tell Leahy where Root was being held or when he would be released.

“This is a huge step, and we’re very excited,’’ Root said. “Up until this point, we didn’t know if he was dead. Now, we know he’s alive, protected, and healthy. And given what’s going on in Syria, being in custody isn’t such a bad thing. We’re just waiting for him to be transferred to the custody of the US Embassy.’’

The morning after their son disappeared, his friends from the language school called his family in Vermont as well as officials at the US embassy in Damascus to alert them that Root was missing. Since then, the family has been in daily contact with the embassy and their congressional delegation.

Tom Root said the US ambassador in Syria met with Syrian officials on Wednesday, who suggested that his son was in their custody. “The ambassador was told that if anyone was in custody, it was a misunderstanding,’’ his father said.

Root’s family hoped their son would be released shortly afterward, but they became concerned when he was not with others released on Friday. “That made us extraordinarily worried,’’ his father said. “We worry about the worst.’’

Yesterday morning, Tom Root received a call from Leahy, who assured him that the government was doing its best to find his son. “The senator said he was in close connection with the Syrian ambassador in Washington,’’ Tom Root said.

He said officials at the Syrian embassy in Washington have been “especially conciliatory, sympathetic, and anxious to help.’’

He described his son, whom he and his wife adopted from India, as a worldly, gregarious young man who loves to ski and learn about other cultures.

“We hope to have him back home and safe soon,’’ Root said. But he has received “no promises’’ as to when that will happen.