A different kind of farm in Vermont is seeking to corner the locavore, healthier-meat market 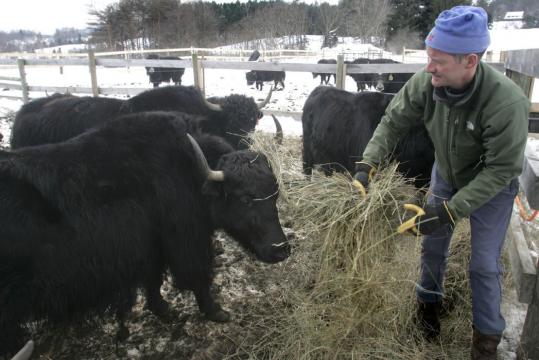 Rob Williams, a Vermont Yak Company founder, fed hay to some of the herd. (Herb Swanson for The Boston Globe)
By David Filipov Globe Staff / March 19, 2011

WAITSFIELD, Vt. — Big, strong, wooly, and ornery, Dolores the yak is named for a sadistic witch, and justifiably so. She once hoisted a 5-year-old boy on her long, sharp horns and tossed him over her back. She pinned an 8-year-old girl to a barn door. She knocked over her owner — the children’s father — and when he tried to get up knocked him over again.

For these random acts of violence, this shaggy rogue was neither put down nor sent to the barn without hay. Instead, Dolores became part of the lore shared by the hardy few Americans who herd yaks for a living. Each one you talk to has a yaks-behaving-badly story. Each one has asked him- or herself the question: Who’s herding whom?

Dolores is one of 40 yaks that belong to five farmers who brought the feisty bovids to the rolling glens of the Green Mountains. Their venture, Vermont Yak Company, aims to satisfy the growing appetite for exotic food that is locally raised, grass-fed, and free-roaming.

The farmers are part of a small but building movement of enthusiasts in the United States who value the yak for its lean meat — one-sixth the fat of grain-fed beef and 40 percent more protein.

Other exotic animals have caught on with niche audiences — bison burgers and ostrich jerky have their fans across the country — but none has gone so far as to replace the beef steer. The yak farmers do not expect to do that either — they know yak meat, with its sweet, slightly gamy taste, is not for everyone — but they figure they will attract the curious and a core market of locavores.

Yaks, which evolved in the Himalayas, make a certain amount of sense in Vermont, with its chilly climate and limited grazing land. They do not require warm barns and can thrive in fields where grass is sparse.

But ask herders what they like best about their yaks and they wax on about the individual personalities of animals that are curious like cats, spirited like ponies, and capable of far more mischief than one might expect from a ruminant cousin of the dairy cows that used to roam Vermont Yak’s 24 acres.

“Every day is different,’’ said Rob Williams, one of Vermont Yak Company’s founders. “Some days I call and they come. Some days they are like, ‘No, we’ll just stay here.’’’

The company supplies a stable of local eateries, grocery stores, and farmers’ markets with yak treats and is exploring direct sales to individual customers. The owners believe that their property, built on the former grazing land of a long-defunct dairy farm in the Mad River Valley, is the only working yak farm in New England. But they would like to be seen as pioneers rather than outliers in a state that they believe could be riding yak to the future.

Williams said this one chilly morning, as he stood before a quintessential Vermont backdrop of snow-frosted farmhouses and silver-trimmed firs. He came under the regal gaze of a magnificent creature that looked as though it had wandered in from the Ice Age. This was Ringo, the 1,200-pound stud bull of the herd, unchallenged master of the pasture, whose long horns and occasional loud grunts were crying out for immediate attention. But Williams, a clump of hay clutched in his hand in front of him, was focused on a young steer with no name, just a number 4 attached to its coat.

“Mmmmmm, yakkie yakkie. Mmmm, yak,’’ Williams intoned, approaching carefully. The steer lowered its head and spread its front legs, the way a puppy might. It feinted. It grunted. It looked like it was about to charge.

Williams won this standoff. Steer Number 4 took the hay and wandered off, gratified.

Yaks — whose distinctive call lent them their Latin name, bos grunniens, the grunting ox — were first domesticated thousands of years ago. Tibetans and Nepalese have for centuries used them to plow and carry heavy loads high into the mountains, turned their thick hair and fiber into clothing, drunken their rich milk, and eaten their lean meat. Yaks were brought to North America in the 1900s; Minnesota yak herder John Hooper estimated that there are between 3,000 and 4,000 yaks in the United States, most of them in the high, arid parts of the West.

Williams and his wife, Kate, discovered the incredible, edible yak on a visit to her brother’s ranch in Montana. They figured the meat would be an easy sell to the thriving locavore market in Vermont. They learned that an acre of pasture can support as many as four yaks, as opposed to a single beef steer.

“We realized that yaks are the perfect Vermont bovine,’’ said Rob Williams.

The Williamses joined with David Hartshorn, whose family had owned the dairy farm, and Ted and Susan Laskaris, who bought the abandoned property in the Mad River Valley, to form their venture in the summer of 2007.

And they encountered the dilemma faced by other New England yakkers: the creatures are both loveable and maddening at the same time.

“They drive me crazy,’’ said Christopher Devaney of New Limerick, Maine, who owns 21 of the animals, all of them pets. “But it would break my heart to sell them.’’

Williams and his partners have an even bleaker problem — they love their yaks, but they have to slaughter them. So they raise only half their herd for meat. Those get numbers, like Steer Number 4.

“We don’t try to get to know them,’’ Williams said.

The other yaks are raised to breed, to attract visitors and possibly buyers. These have names, and are known for their personalities, including the ornery female named after Dolores Umbridge, the sorceress in the Harry Potter series.

Yaks are not easy pets to own. They can run surprisingly fast and leap fences. They routinely ignore their masters. But they can also learn to come when they are called, they are excellent substitutes for guard dogs, and they are popular among people who like to buy exotic pets.

Hooper, the Minnesota yak herder, makes his living that way. Marketing the meat, he said, is trickier.

“You need a yuppie type of people who are interested in lean, red meat,’’ he said.

That is not as big a problem for Vermont Yak Company. One customer, The Skinny Pancake, a trendy eatery in Burlington, recently sold out of the meat, which it was using in hearty dishes that bring out the sweet, earthy flavor of yak. These included chef Brian McDermott’s calorific masterpiece — yak sausage with pirogi crepes stuffed with cheddar and potato, and head-of-the-woods mushrooms sautéed in nutty brown butter. At $13.95 it was the most expensive item on the menu.

Vermont Yak is starting to roam beyond New England. A Tibetan restaurant in New York City has become one of its biggest customers. Williams is now trying to attract individual buyers; he recently sent 5 pounds of yak meat to a woman in Brooklyn who had tried the stuff at an outdoor fair and now cannot get enough.