Rural Vermont once again feeling left behind by technology

Broadband is slow to arrive in remote areas 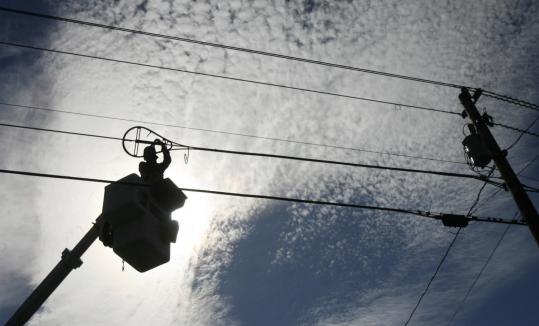 EAST BURKE, Vt. — In rural northern Vermont, it took until the 1960s to run power lines to some towns decades after the rest of America got turned on.

These days, it’s the digital revolution that remains but a rumor in much of rural America.

Dial-up user Val Houde knows this as well as anybody. After moving here four years ago, the 51-year-old mother of four took a correspondence course for medical transcription, hoping to work from home. She plunked down $800, took the course, then found out the software wasn’t compatible with dial-up Internet, the only kind available to her.

Selling items on , watching videos, playing games online? Forget it. The connection from her home computer is so slow, her online life is one of delays, degraded quality, and “buffering’’ warning messages. So she waits until the day a provider extends broadband to her house.

“I feel like these companies, they don’t care about these little pockets of places,’’ she said one night recently, showing a visitor her computer’s slow Internet service.’’ And I know we’re not the only ones.’’

For Houde and millions of other Americans who have slow, or no, Internet service, help is on the way.

Bolstered by billions in federal stimulus money, an effort to expand broadband Internet access to rural areas is under way, an ambitious 21st-century infrastructure project with parallels to the New Deal electrification of the nation’s hinterlands in the 1930s and 1940s.

President Obama emphasized the importance of Internet access in his State of the Union address last week.

“To attract new businesses to our shores, we need the fastest, most reliable ways to move people, goods, and information from high-speed rail to high-speed Internet,’’ Obama said.

In the Depression, it was power to the people for farm equipment and living-room lamps, cow-milking machines and kitchen appliances. Now, it’s online access to YouTube and digital downloads, to videoconferencing and Facebook, to eBay and Twitter.

“Rural areas all across the country are wrestling with this, somewhat desperately,’’ said Paul Costello, executive director of the Vermont Council on Rural Development. “Young people who grow up with the media will not live where they can’t be connected to digital culture. So most rural communities have been behind the eight ball.’’

Seventy years ago, President Franklin Delano Roosevelt realized that if private industry wouldn’t run power lines out to the farthest reaches of rural areas, it would take government money to help make it happen. In 1935, the Rural Electrification Administration was established to deliver electricity to the Tennessee Valley and beyond.

Now, money from the American Recovery and Reinvestment Act is doing the same with broadband, which is typically defined as high-speed access via DSL, cable modem, fiber optics, or fixed wireless.

The stimulus act set aside $7.2 billion for expansion of broadband access, believing it will spur economic growth, boost educational opportunities and create jobs. The money has jump-started what were existing efforts by states and telecom providers to bridge the digital divide of rural America.

In its national broadband plan issued last year, the Federal Communications Commission pinpointed schools’ use of online resources as one of the key targets of the stimulus-funded expansion efforts.

“With broadband, students and teachers can expand instruction beyond the confines of the physical classroom and traditional school day,’’ the plan says. “Broadband can also provide more customized learning opportunities for students to access high-quality, low-cost and personally relevant educational material.’’

Schools in many rural districts lack that now.

The 13 schools in his district share a T-1 line whose bandwidth is so small that whenever a video field trip is planned for a class, all the other users on the system have to stop using e-mail first.

A US Commerce Department report last year showed that 65.9 percent of urban households subscribed to broadband in 2009, compared with 51 percent of rural households. There are several reasons for the rural shortfall, but lack of availability is the most often cited.

Rural consumers have been left behind, either because their homes are too far from one another, because mountains make construction expensive, or because providers have lacked the capital to justify the investment.

In Vermont, the rugged landscape of the Green Mountains, combined with the spread-out locations of the state’s 620,000 people, has impeded building before — the infrastructure for telephone, transportation, and electricity infrastructure, among other things.

The last towns to get electricity were the hamlets of Granby and Victory, in 1963, following years of fund-raising, including a “Holiday in the Hills’’ weekend in 1959 in which residents showed visitors how to get by using oil lamps and wood cookstoves.

Even now, utility crews have to use draught horses to haul poles and cables to places that trucks can’t go.

“It’s not as easy as some of the other big flat states in the Midwest, where you put the plow down and you just head on out, because they’re in sandy soil they can bury their cable in,’’ said Kurt Gruendling, vice president of marketing and business development for Waitsfield and Champlain Valley Telecom.

“In Vermont, in particular, we say we’re ‘topographically challenged.’ We have a lot of nooks and crannies,’’ said Deborah Shannon, director of broadband outreach and coordination for the Vermont Telecommunications Authority.