Vt. suspends its seal of quality over misuse 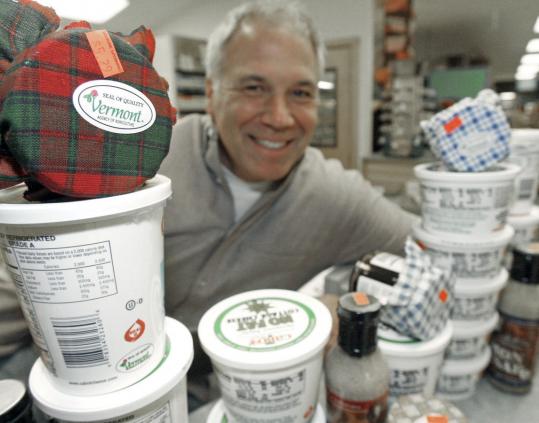 MONTPELIER — Vermont’s familiar seal of quality on maple syrup and other packaged foods has been suspended because it has fallen into misuse and become meaningless, the state’s agriculture chief said.

Still, some lawmakers want to save the seal.

Agriculture Secretary Roger Allbee told two state Senate committees yesterday that the seal, created in 1982 to promote the purity of Vermont food products, is being stamped on products as diverse as dog food and beer.

He said the seal program does not have sufficient inspections ensuring the standards are followed.

“It hasn’t seen a budget line item, and it’s been held together something like farm equipment — a piece of wire and a length of bailing twine,’’ Allbee said.

Members of the Senate Agriculture and Economic Development committees told Allbee they want to look for some way to keep and enhance the program as a marketing tool.

If so, there are questions to address.

For instance, a Quebec-made yogurt that uses Vermont milk has been carrying the oval-shaped seal with “Vermont’’ in script and smaller block letters spelling “Seal of Quality’’ above it on the label.

Is Vermont milk as a raw material sufficient, or does the finished product have to be made in-state? If the finished “Vermont-made’’ product is a chocolate chip cookie, is it OK to have the chocolate originate in South America?

Steve Clayton, owner of Shelburne Supermarket, said he sells a number of Vermont products but finds their popularity less dependent on the seal than on their individual reputations.

“If it’s a local Vermont product that lives up to their name, they don’t need the seal because they’re quality products,’’ he said.

Clem Nilan, general manager of City Market in Burlington, said his customers are willing to pay a premium when a product is marketed as coming from Vermont. People perceive high quality in the Vermont name, he said.

Committee members said they were not sure what a legislative fix would look like, but they want to craft one.

Senator Matthew Choate, Democrat of Caledonia, said he recently met with maple syrup producers in his district and they were “all very supportive of keeping the seal.’’

Current law and regulations set out detailed instructions for meeting the quality standards to warrant the symbol, Choate said later. He questioned why the agriculture agency was not doing a better job of implementing the current rules.

Allbee cited a lack of funds.

Committee members said new legislation could leave more of the costs of the program to the private sector. One idea floated was for those seeking the seal of quality for their products to get a third-party company to certify that they meet state standards.

Nilan said stepping up the assurances behind the seal sounds like a good idea.