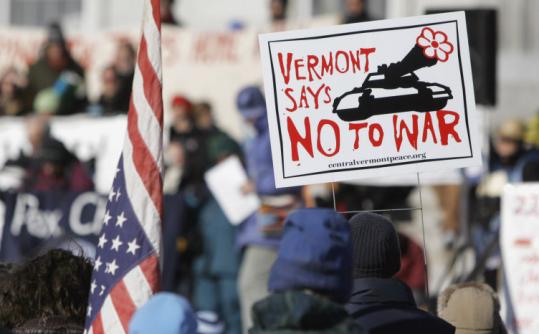 An antiwar protester held a sign during a rally at the State House in Montpelier in February 2006. (Toby Talbot/ Associated Press/ File)
By John Curran Associated Press / January 27, 2010

BENNINGTON, Vt. - This state has suffered more deaths per capita in the Iraq war than any other state.

“The losses we’ve had in Vermont have touched most of the state because we’re so close-knit,’’ said Major General Michael Dubie, commander of the Vermont National Guard. “Almost everyone knows someone - or they know someone who knows someone - who’s been affected by our losses.’’

The high rate speaks more to Vermont’s small size than it does to the number of deaths. With such a small population, it does not take a large number of deaths to produce a high per-capita rate. Vermont is followed on the list by Montana (2.87), Wyoming (2.57), Nebraska (2.50), and South Dakota (2.46).

The Pentagon does not provide state-by-state breakdowns of troops sent overseas, so it is unclear how many Vermonters are in the war zones.

But less than 1 percent of the US military is made up of people who list Vermont as their home state.

Another factor may be the Vermont GIs’ assignments. Nearly half the 22 killed were members of the Vermont National Guard, a contingent of which served in Ramadi, a hotspot in 2005 and 2006. Six Vermont Guardsmen were killed there.

The Vermont National Guard is heavy with cavalry and infantry operations and has the US military’s only mountain infantry brigade, specializing in mountaineering and small-unit tactics.

“We have been assigned some very tough missions,’’ Dubie said. “Unfortunately, we’ve paid the price.’’

Halvorsen paid it about two weeks after the “shock and awe’’ invasion of Baghdad. The 40-year-old career Army aviator was piloting a Black Hawk helicopter near the city of Karbala when it crashed, killing six.

An Army investigation concluded the deaths were nonhostile, attributing the crash to pilot error.

“When Erik died, I just looked at that coffin, and whatever religion I had, I just lost it,’’ said his mother, Dorothy Halvorsen, who was against the US invasion of Iraq and told him so after he was sent there.

Now she salutes her fallen son by contributing to local peace organizations and gathering with other antiwar activists in an annual vigil timed to mark the anniversary of the war’s start.

The state has lost one soldier in Afghanistan, ranking 45th in per-capita losses for that war.

Vermont is among the bluest of blue states. In an Associated Press exit poll last November, a third of respondents in Vermont described themselves as liberal, while 1 in 5 did so nationally. The state’s three members of the House and Senate are all war opponents, including Senator Bernie Sanders, the only self-described socialist on Capitol Hill.

Also that year, the towns of Brattleboro and Marlboro voted to seek indictments against Bush and Cheney over the war, and dozens of other towns voted at town meetings for impeachment.