Filling a hole in the heart of town

Across New England, residents pool resources to save their treasured local shops 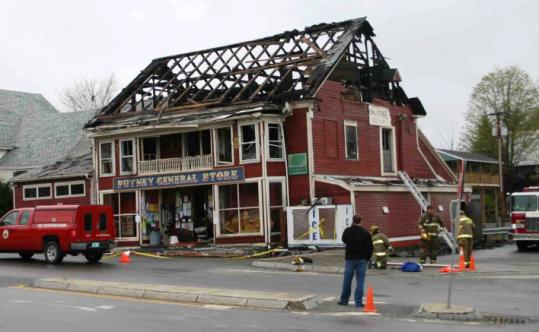 An electrical fire destroyed the third floor and drenched much of the rest of the Putney General Store in May 2008. (Lyssa Papazian)
By Sarah Schweitzer Globe Staff / December 13, 2009

PUTNEY, Vt. - It wasn’t a kitschy tourist spot, or a boutique stocked with artisanal cheeses. The Putney General Store was a workhorse, a 215-year-old dowager in this riverfront town, with dependably dusty floor boards, walls obscured by drawers of Phillips screws and sacks of flour, and a lunch counter rounded out each morning with old-timers who called themselves the Viagra Club.

But big box stores had opened across the highway and when a fire ripped through the ceiling in May 2008, the owner decided he could not afford to reopen. The store sat shuttered, a waterlogged hull, until townspeople decided it was too small to fail.

Yes, it was just a store. But it was the bedrock of Main Street. If no angel investor was going to rescue it, they would, by pooling their money - much as they had, a few months earlier, moved to revive the town’s defunct bookstore.

“These are the hearts of our town,’’ said Tim Cowles, a landscape artist who recently wrote a $1,000 check for the Save the Putney General Store fund. “There has to be a conscious effort to save them.’’

As icons of New England merchandising disappear, towns across the region are mounting efforts to subsidize them, and in some cases, recreate them. In Greenfield, Mass., when a department store left town, residents purchased shares to help fund the start-up of a new store. In Cundy’s Harbor, Maine, residents spearheaded a 500-donor effort to buy a working wharf and village store that they feared could become a private residence. In Hardwick, Vt., 50 residents ponied up $10,000 to start a restaurant after years of going without one.

“It’s about a community understanding that there are certain businesses that are crucial to the success of their community,’’ said Paul Bruhn, executive director of the Preservation Trust of Vermont, a group that has aided a host of so-called “community-supported enterprises.’’

Bruhn and others say the shoring-up is necessary as the Internet and megachains have leeched business from local outfits. The challenge was compounded during the years of real estate frenzy as wealthy outsiders paid high prices and then quickly unloaded businesses after discovering that the profit margins could be slim and the hours long. The frequent turnover saddled businesses with high debt burdens that a single owner could not carry.

Perhaps no town has persevered to save local businesses quite like Putney, population 2,600, a mix of artists, wealthy retirees, paper mill workers, and educators. The Sandglass Center for Puppetry and Theater Research is here, as are four private schools, including Landmark College, a liberal arts college serving those with learning disabilities. The sulfurous smell at times hangs in the air as the mill churns out napkins and tissue paper.

Two decades ago, the town center had four stores with groceries and sundries, each with a peculiar personality. There was a coop that offered kale and tofu, a canned goods emporium, a convenience store, and the Putney General Store, founded in 1794, a dimly lit rabbit warren of stuff and services like video rentals and knife sharpening, where everyone seemed to end up at least once a day.

“It was a place to meet,’’ said Sharon Short, a Putney native whose mother had groceries from the store delivered to her house by horse and buggy.

The Putney General Store traded hands rarely, and its owners became the town’s extended family, avuncular figures who knew local children by name and patiently endured their pranks - like the calls to let Prince Albert out of the can. Then about nine years ago, a couple from New York bought the store and sold it five years later to a Turkish couple who ran the pizza shop across the street. When an electrical fire destroyed the third floor and drenched much of the rest of the store in May 2008, Erhan Oge declared that he did not have the money to rebuild; prospective buyers appeared more interested in tearing down the building than restoring it.

Residents gathered and decided that the General Store was worthy of the same kind of fund-raising effort that had recently raised $45,000 in seed money to replace the book store in town that had closed. The General Store group held fund-raisers and sent out town-wide mailings, and after months of work, $100,000 had been collected from 150 local donors. The Putney Historical Society, a nonprofit, bought the store in November 2008, and secured $600,000 in grants and tax credits, with plans to open in May 2010. Then, the night after Halloween, at 10:30, the Putney General Store went up in flames again, a fierce blaze that ripped through the building and sent it tumbling to the ground in 20 minutes. This month state officials declared arson; they are still hunting for the perpetrator.

“The town felt kicked,’’ said Lyssa Papazian, a former selectwoman who had led the effort to reopen the store. “People were calling me and giving me condolences, like I had lost a family member.’’

Once again, the residents gathered and decided to raise more money for the store - some $200,000 to make up for preservation grants the project no longer qualifies for because its historic structure is gone. And once again, town center is sprinkled with solicitations for money - piles of raffle tickets for a drawing at the community supper in February, a sign promoting a fund-raising gala where acupuncture and massage services will be exchanged for $35 donations.

About $15,000 has been raised so far. There is yet no opening date scheduled, and the site where it once stood is now a cavernous hole with only the granite foundation remaining. It has become a place of mourning, with a wreath hung and dried flowers poked into the chain link fence bounding it, and a message, looped in cursive, reading, “We are the General Store.’’

“It is a hole and it feels like a hole,’’ said Collin Leech, a massage therapist who frequented the store.

For the clutch of remaining businesses in town center, the loss has meant sluggish business. The General Store was an anchor, they say, bringing people to the town center.

“We all felt like we just had to hold on until May,’’ said Sarah Baker, owner of Putney Books, referring to the original reopening date. “Now that so much is open-ended, we’re back to feeling very nervous.’’

Meanwhile, the town has yet another icon to salvage: Last spring, the United Church of Putney declared that it was closing its doors. The historical society bought the church for $1. A deal, except that the church needs $200,000 in repairs. The society expects to appeal to residents for donations. But for now, while the general store fund-raising is going on, the church will have to wait.

Correction: In the print version of this story, the name of a local institution was misspelled. The correct spelling is the Sandglass Center for Puppetry and Theater Research.