A bridge to nowhere

When the historic Lake Champlain Bridge closed, it was more than an annoyance - it entirely upended a way of life 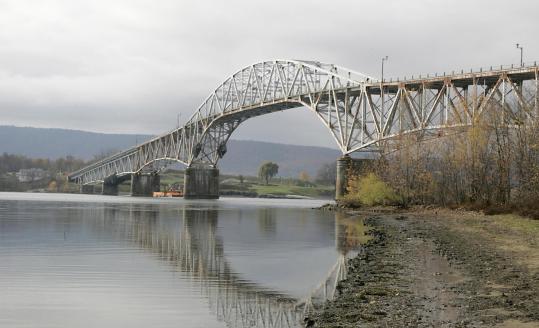 When the Lake Champlain Bridge between New York and Vermont closed, commuters got in long lines at the ferries. (Herb Swanson for The Boston Globe)
By David Filipov Globe Staff / November 1, 2009

ADDISON, Vt. - It was so much more than a bridge.

When Governor Franklin D. Roosevelt of New York helped open Lake Champlain Bridge in 1929, he and tens of thousands of onlookers were celebrating the future of automobile travel and the expectations of roadside commerce. The 728-yard span across the 120-mile-long lake was a gleaming marvel of engineering that would change the way people and goods moved forever.

Vermont business owners along what has been a vital artery for decades have found themselves, abruptly, in a backwater. Farmers who work the land on both shores are now forced to make the costly 90-mile trek around the lake to reach crops a few miles away. Hundreds of workers from impoverished upstate New York towns who have low-paying but steady jobs on the Vermont side now face long-distance commutes that add hours to their day and take dollars from their pockets.

People joke that you can’t get there from here, but nobody here is laughing.

“This is a disaster on so many levels. So many businesses, so many people,’’ said Lisa Cloutier, owner of The Bridge Restaurant, a blue barn-wood family eatery that sits at the foot of the span in Addison, a hamlet on the Vermont shore where businesses are almost entirely dependent on bridge traffic. “People moved here because the bridge is here. Suddenly we’re really off the beaten path.’’

The restaurant has a community bulletin board where people post their advertisements; nearly half are from the New York side. It is the kind of place where passing travelers choose from an array of grilled corn muffins and tantalizing homemade pies (topped with cheddar).

Pride in the location beneath the span is expressed in the logo on the coffee cups and awnings and in the framed and faded 1929 front page proclaiming the new bridge the beginning of a “greater era.’’

Cloutier estimated that New Yorkers accounted for 80 percent of her business. Some of her employees can no longer make the commute from New York, so she has laid them off and replaced them with her mother, Helen. Like many people on both sides, she expresses anger at authorities for failing to notice the deterioration until it was too late.

Transportation authorities on both sides of the lake say they do care. They had expected the aging piers to crumble gradually, but they figured that they would remain safe at least until 2013, when repairs were planned. Now they say the bridge - a deck truss bridge similar to the one that collapsed in Minneapolis in 2007, killing 13 people - will stay closed at least through the winter, if it can be repaired at all.

To help, New York is subsidizing the existing ferry routes and trying to open a new one next to the bridge. But the boats will be sailing against the wind to meet the demand - the bridge saw an average of more than 3,000 vehicle trips each day.

Ron Hallman, vice president for public relations at Porter Hospital in Middlebury, Vt., said some of the 75 employees who commute to his hospital from New York cannot wait three hours for a ferry or allow for a 90-mile detour because they have to get their children to and from school. Others cannot afford the gas.

Instead, some people have been crossing in craft as small as kayaks. On Wednesday night, with the air temperature in the low 40s, Cloutier and several other business owners rode an 18-foot Stingray speedboat across the pitch-black lake to attend an emotionally charged meeting between frustrated residents and officials in Port Henry, N.Y.

A safer alternative for Champlain’s gale-swept autumn waters is being offered by the Basin Harbor Club, a resort that has made its sturdy tour boat available to ferry pedestrians across the lake, where free shuttle buses take them where they need to go. Lorraine Franklin, co-owner with her husband, Dana, of West Addison General Store, a three minute drive from the closed bridge, serves coffee on the boat, trying to make up for lost business.

Two of the passengers on a recent early-morning crossing, Joel and Jane Melick, were commuting from Moriah, N.Y., to jobs as maintenance workers for the club. What used to be a 23-mile drive would stretch to nearly 100 if they drove around the lake - not that they can afford the extra gas money.

“Imagine the Bourne Bridge and the Sagamore Bridge go down and you work on the Cape,’’ said Joel Melick, who is originally from Worcester. “It’s sort of like that.’’

Sort of. Cape Cod Canal does not usually freeze. Lake Champlain does. The temporary ferries will have to stop running in a few weeks, unless authorities bring in ice-breakers, such as the ones that operate on the border with Canada.

If that does not happen, people are worried that some commuters will try to cross the lake on snowmobiles. Underwater currents in the lake are fickle, and the thickness of the ice is not uniform; even experienced ice fishers fall through, said Joe Ezzo of Witherbee, N.Y., an amateur ice fisherman.

Ezzo himself has an interesting conundrum. Among other things, he is called upon by his employers in Vergennes, Vt., to plow snow after an overnight storm. He has no idea how he will make the drive around the lake in a snowstorm, adding that he would not consider crossing the ice.

Some lakeside residents said they would be willing to take risks - including using the now barricaded bridge. Robert Smith, who since 1966 has owned Chimney Point Farm in Addison, is one of them. He grows corn and soy on the New York side to feed his 271 cows. The business is already on the ropes because of the steep decline in the price of milk over the past two years. He estimates that trucking his feed around the lake will cost him $17,000, an expense he cannot afford.

“It’s just choking me to death,’’ Smith said. “We feel like we’re cut off from the world.’’

John Zicconi, a spokesman for the Vermont Agency of Transportation, said authorities were looking into safer solutions. Along with the possible bridge-side ferry, another idea being floated is a temporary bridge.

Both ideas involve complications. It may not have been a problem in 1929, but nowadays, building even a temporary ferry dock requires elaborate research into possible harm to the environment and historic or archeological sites.

“We are aggressively pursuing this,’’ said Scott Newman, historic preservation officer for the Vermont transportation agency.

Darwin Pratt is one of many people who say they cannot wait long. The general store he has run for 40 years in Bridport, Vt., is losing thousands of dollars each day.