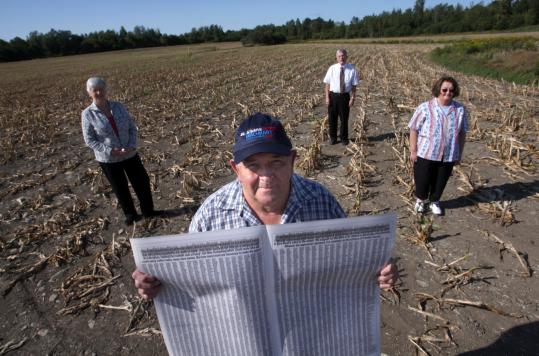 Wal-Mart supporters include (from left) Mary Groff, Raymond Gadue, Bill Groff, and Eileen Gadue at the proposed site in a cornfield. Raymond Gadue held a paper with more than 14,000 signatures of others who back the move. (Bill Greene/ Globe Staff)
By Sarah Schweitzer Globe Staff / September 20, 2009

ST. ALBANS, Vt. - On a Sunday morning at Nana’s Restaurant, the vinyl booths are jam-packed and waitresses fly out of the kitchen with platters plaited with french fries and brown gravy. But one mention of and the ladies pause under a hanging plant speared with an American flag to explain why the big box chain needs to come to town.

Longing for Wal-Mart’s prices may be keen in St. Albans, a one-time railroad depot a half-hour from the Canadian border, where the main thoroughfare’s weathered Victorian homes quickly give way to a jumble of car dealerships and strip malls. Yet it is here that a group of residents, teamed with preservation and environmental groups, spent four years fending off a 1993 effort to raise a Wal-Mart in a cornfield and the last nearly six trying to spoil a second attempt.

The battles add up to what is believed to be the nation’s longest ongoing Wal-Mart fight.

The duration reflects the high stakes: Should Wal-Mart win the right to build in St. Albans, opponents fear the retailer would be poised to proliferate in rural corners of a state that has resisted its overtures. Vermont has the fewest Wal-Marts in the nation, with four stores, compared with 46 in Massachusetts, 27 in New Hampshire and 22 in Maine.

Wal-Mart officials say the push for a greater market share in Vermont reflects the realities of modern life.

“You can’t live in the past and say people should ride horses and grow their own vegetables,’’ said Keith Morris, a spokesman for Wal-Mart. “People are shopping, and if you don’t provide the opportunities, they will travel elsewhere to find those opportunities.’’

But the project’s opponents, which include Montpelier-based Vermont Natural Resources Council and Burlington’s Preservation Trust of Vermont, say that satisfying a yen for cheap goods will yield negative long-term effects. More Wal-Marts in places such as St. Albans, they say, will ruin Vermont’s essence - replacing its green fields with concrete swaths and devastating its quaint downtowns as small merchants suffer.

“If this goes, it will be a signal that sprawl will come to Vermont,’’ said Jon Groveman, an attorney for the Natural Resources Council.

The presence of Wal-Mart is a settled matter in many parts of the country - the big box stores dotting highway exits like blue-banded beacons of discount commerce.

But Vermont has been different. Big retailers have been viewed with skepticism, and the state’s unique development code - Act 250, which gives the state broad authority to shut down projects for environmental or quality of life reasons - has been harnessed to slow Wal-Mart’s arrival.

The first three Wal-Marts built in Vermont - in Bennington, Rutland, and Berlin - have escaped hard scrutiny, with environmentalists deeming them tolerable because they went into spaces vacated by stores like Woolworth and and were modestly sized, at less than 75,000 square feet. A fourth, in the Burlington suburb of Williston, broke with that pattern, producing a 115,000-square-foot building on one-time farm land. The store has attracted other big box stores, such as and Toys “R’’ Us.

The St. Albans Wal-Mart would be like Williston’s, only bigger. Not only would it be built on open land - a cornfield opposite the town’s drive-in movie theater - but it would be the state’s largest Wal-Mart to date, at 160,000 square feet, in a town of 6,000 residents where farms still dominate the surrounding countryside. The location and magnitude of the project is seen as a test of Vermont’s development law, with a Wal-Mart in St. Albans possibly paving the way for similar projects across the state.

The St. Albans Wal-Mart fight has raged in courtrooms and in town offices, produced a mountain of motions and rulings. At a recent hearing, pleadings from both sides totaled 1,000 pages. And there is no definitive end in sight. A judge is expected to issue a decision this fall that could send the case to the state Supreme Court, for the second time.

The conflict has divided neighbors and families, as issues of class and values have come to dominate the debate. Opponents say that supporters are being materialistic in forfeiting natural resources and the downtown for inexpensive wares. Supporters decry opponents as elitist for keeping jobs and cheaper goods out of a county that could use both.

Indeed, discussing Wal-Mart can be like politics - something avoided in polite conversation, lest feelings are bruised.

“I know a lot of people who support us are afraid to say so,’’ said Betty Finn, 82, an outspoken Wal-Mart critic whose late husband, a former sheriff, spearheaded the movement against Wal-Mart in St. Albans.

Finn said she has received unsigned notes critical of her Wal-Mart opposition from time to time in the mail.

Jeff Davis, the Vermont developer seeking to build the St. Albans Wal-Mart, said he decided in 2004 to try to build the store, after the state Supreme Court had knocked down an earlier developer’s effort, because conditions in St. Albans had changed. Other discount retailers - including Ames and Woolworth - had shuttered, leaving a retail void. The controversy has put the project a year behind schedule, he said, but he remains committed to the fight because most residents want the Wal-Mart.

“We have a beautiful state. And I, as well as the opponents, care about this state. But Vermonters are like other Americans,’’ said Davis, who also developed the Williston Wal-Mart. “If they can save a few bucks at a store like Wal-Mart, that’s a serious concern to a lot of people.’’

Davis pointed out that a rally he staged for supporters last October at a local sports complex drew some 1,500 people; hundreds left with hats and T-shirts that read: “St. Albans Walmart Now.’’ Davis also has a key supporter in Governor Jim Douglas, a Republican who attended Davis’s December 2003 announcement of a renewed push for a St. Albans store.

Stephen Holmes, of the Vermont Natural Resources Council, said the group would welcome a Wal-Mart if it elected to move into a vacant downtown space.

Morris, of Wal-Mart, said a downtown location is not feasible because creating underground parking would be too expensive.

Meanwhile, supporters say there is urgency to move the Wal-Mart along because the store would bring jobs to the area.

“I want to see the downtown do well, but we need that store,’’ Ron Vincent, a contractor, said.

Roberta McGraw, a retired worker, said, “The need for employment outweighs the need for a cornfield.’’

Opponents say the town could lose 12 businesses and 40 jobs if Wal-Mart comes to town and draws customers away from local stores. Some of the losses would come from other retail chains - such as TJ Maxx, JC Penneys, Peebles - which opened in St. Albans when a wave of Burlington commuters began settling in the town, attracted by less-expensive real estate.

By far, opponents’ biggest worry, though, is that Wal-Mart will erode Vermont’s unique ethos.

“I ran away from Cleveland,’’ said Marie Frey, a Wal-Mart opponent and co-owner of Hudak Farm, which sits less than a mile down the road from the corn field.

“All the development there has made it so unrecognizable. And now it’s chasing me. The development is going on here, little by little.’’