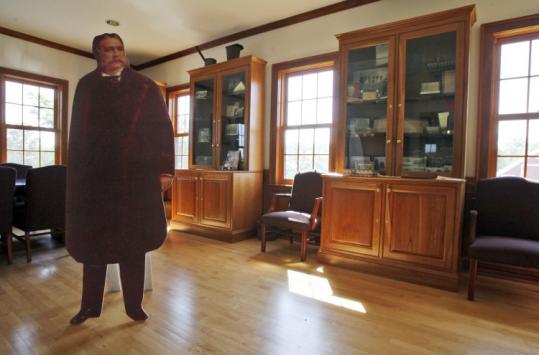 Nearly 5 miles up the winding two-lane country road, past rolling hills and dairy farms, is the tiny Chester A. Arthur Historic Site, proclaiming the spot where the nation’s 21st president was born in a cottage.

Nearly 123 years after his death, doubts about his US citizenship linger, thanks to lack of documentation and a political foe’s assertion that Arthur was really born in Canada - and was therefore ineligible for the White House, where he served from 1881 to 1885.

Long before “birthers’’ began questioning the citizenship of President Obama, similar questions were raised about the early years of Arthur, an accidental president who ascended to the job after President James Garfield was assassinated.

The Constitution says only a “natural-born citizen’’ may serve as president. The issue has received renewed interest because of legions of Obama doubters who claim his Hawaiian birth certificate is fake and that he was born in Kenya.

But the Arthur birthplace question came up before the Internet was around to spread such theories.

Known as Vermont’s “other president’’ - Calvin Coolidge was born in Vermont - Arthur was the son of a Baptist minister whose first assignment was this small town of 1,916 people in the heart of northern Vermont dairy country.

He was born Oct. 5, 1829, but later in life, he lied about the year. Even his gravestone lists 1830, though Arthur family bibles at the Library of Congress in Washington say 1829.

The family moved often, and by 1835 had left Vermont. Arthur went on to become a teacher, lawyer, and political operative, serving as quartermaster general for the state of New York during the Civil War and later Collector of the Port of New York, appointed by President Ulysses Grant.

The focus on his place of birth became an issue in the 1880 presidential campaign, when Arthur was tapped to be the running mate for Garfield.

According to historical accounts, Republican bosses wanted him to provide proof of his birthplace, but he never did.

Democrats, meanwhile, hired a lawyer named Arthur Hinman who sought to discredit Arthur, alleging that he was born in Dunham, Quebec, about 47 miles north of Fairfield. Hinman traveled to Vermont and Canada to research Arthur’s past, eventually concluding that Arthur was born in Canada but appropriated the birth records of a baby brother who was born in Fairfield, but died as an infant.

He later incorporated the findings into a book titled “How A British Subject Became President of the United States.’’

Arthur, who served from 1881 to 1885, never publicly addressed the allegation.

Vermont officials hold fast to their claim on Arthur’s birth, but have little to back it up.

The state of Vermont didn’t begin receiving birth records until 1857, according to state archivist Gregory Sanford. The birth records at the Town of Fairfield go back no further, Town Clerk Amanda Forbes said.

“This was a little campaign trick, in an era when politics were just as dirty as they are now,’’ Reeves said. “It didn’t threaten him in any way.’’