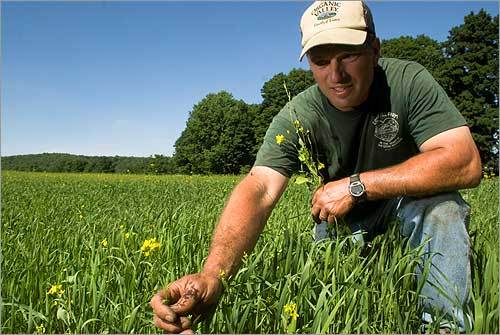 RANDOLPH, Vt. - Set in the green hills of this dairy farming state, where a single white church spire rises in the distance, the Beidler family farm looks - and sounds - like an archetype of Vermont agriculture. Twice a day, farmer Brent Beidler calls his cows into the shingled barn for milking, a regular cycle that links him to the state's long dairy tradition.

But later this summer, in a sign of changing times across the region's rolling farmland, Beidler will do something new. He will climb into his big red combine to harvest an American staple rarely seen in a century in the Green Mountain State, wheat.

Spurred to action by sharply rising prices for transportation and animal feed, and surging consumer demand for locally grown foods, more farmers in New England are deciding to grow grains.

In the last five years, the number of Vermont farms producing traditional Midwestern crops, including wheat, rye, barley, oats, soybeans, and corn, has increased from a handful to as many as 15, and more are poised to join them, according to a state estimate. This spring, at a statewide grain-growers meeting where farmers formed a new group, the Northern Grain Growers Association, organizers had to turn away would-be participants after 80 to 100 people showed up, including some from Massachusetts and New Hampshire.

"Vermont has primarily been a dairy state, and in some ways, that's our commodity - Kansas is wheat, and Vermont is milk," said Heather Darby, a crops specialist with the University of Vermont Extension who is helping to develop grain farming in the state. "Now there's a need and a demand for a product that has not been grown here for a long time, or not at all."

Amber waves of grain were not always unfamiliar here. In the 1800s, when there were no supermarket bread aisles and families fed themselves, small wheat plots and local mills for grinding flour were common, Darby said. At one time, when the United States stretched no further west than the Mississippi River, Vermont was known as "the bread basket of America" - though the state never grew enough wheat to meet its own needs.

Disease and pests were so rampant, farmers saw a good wheat crop only once every five years. So as Midwestern farming developed, and grains became easy to ship, Vermonters gave up growing them. For most of the last century, wheat crops disappeared, but for a few fields tended by scattered homesteaders.

The resurgence of interest in regional grain-growing picked up momentum about five years ago, as Vermont dairy farmers faced escalating costs for grain shipped from the Midwest to feed their cows. Costs have doubled while supplies have grown more scarce, farmers said, because of a host of factors, including crop failures in the American heartland, increasing global food demand, unprecedented fuel costs, and a shift from grain to corn production in the United States, driven by subsidies for ethanol, a fuel made from corn.

In the last two years, other factors have further fueled demand for local wheat, especially the sudden, explosive growth of the local food, or "localvore," movement. Increasingly, local food is seen as a safer, more reliable source. More and more Vermonters, from all walks of life, are turning to locally grown foods, farmers and bakers said, creating new markets for, among other products, Vermont-grown wheat for making flour and bread.

At an annual farm festival in Randolph this spring, a lunchtime crowd cheered at the announcement that the flour used to make the rolls came from wheat grown half a mile away at the Beidler farm.

"We have people calling us all the time to make sure we're still growing wheat, that we're going to be grinding it, because they're counting on us," Beidler said.

In Western Massachusetts, the same enthusiasm greeted Ben and Adrie Lester, owners of Wheatberry bakery in Amherst, when they planted 4 acres of wheat this spring, to fill what they saw as a hole in the local food supply, after watching flour prices triple in three years. Next year, they plan to let the public buy shares in their wheat fields, in return for a portion of the crop. In Northern Maine, farmers have started growing organic wheat in the last five years and will harvest as many as 1,000 acres this year, said Peter Sexton, a crops specialist at the University of Maine Extension.

New England will never match Midwestern grain production, where massive farms in top-producing states like Kansas and North Dakota turn out hundreds of millions of bushels of wheat every year. In Vermont, about 500 acres are planted with wheat, Darby said. But more grains are planted every year.

Beidler and his wife, Regina, bought their Vermont farm in 1998, converted to organic dairy, becoming part of the farmer-owned Organic Valley cooperative, and planted their first quarter-acre of grains four years ago. This summer, they are growing 5 acres of wheat, its small green shoots still grasslike after two months in the ground, and 20 acres of corn, millet, potatoes, and beans, plus canola and camelina to press for cooking oil. Next year, they expect to double the size of their wheat crop.

Spencer and Jennifer Blackwell started growing wheat, buckwheat and rye on leased land in Burlington in 2004, and plan to expand their grain production on a 50-acre vegetable farm they recently bought in Middlebury through a land trust conservation program.

"It's impractical here but not impossible," said Spencer Blackwell.

"There are more of us than I can count on two hands doing it in the state now, and we're learning and getting better every year."

The learning curve for growing grains is steep, with few resident specialists to rely on, farmers said. Combines and other equipment are expensive and hard to find - the Beidlers started out with a 1950s combine from Iowa - and hard to share, because their size makes them difficult to transport. The state's hilly, rocky terrain is difficult to manage, and grain storage facilities and mills, for grinding wheat into flour, are practically nonexistent.

Even harder to overcome, Vermont's humid climate fosters rot and diseases, and lowers the protein and gluten content of locally grown wheat, which can be a problem for bakers. To develop seeds better-suited to East Coast conditions, farmers like Jack Lazor, a veteran dairy producer and grain grower with 50 acres of wheat near the Canadian border, are test-growing dozens of heirloom varieties. In a good year, he can harvest 50 bushels of wheat per acre, enough to mill 2,500 pounds of whole wheat flour.

Proponents are also developing other uses for grains.

A small biofuel refinery is already up and running in Vermont, and tests are underway to see if canola, soybeans, and sunflowers could be grown and made into biofuels, to be used by farmers to run their equipment, said Allen Matthews, farm enterprise coordinator for the University of Vermont's Center for Sustainable Agriculture.

Farmers say there is a potent sense of possibility around grain growing - an optimistic feeling that has been as scarce as wheat for many decades in the region's agriculture.

In Vermont in the last decade, Matthews said, dairy farms have disappeared at a rate of 80 to 100 every year, throwing the pastoral landscape into jeopardy.

"Creating local food systems creates opportunities for more farms, and that's exciting, because what we've seen in Vermont and everywhere else is decline," Darby said.

"It gives people hope when you talk about things coming alive again."