Uncertainty threatens a way of life 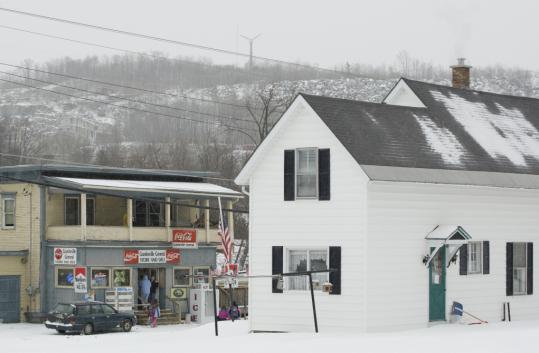 GRANITEVILLE, Vt. - For nearly two centuries, the massive gray granite deposits of this hamlet have produced the headstones and memorials that dot cemeteries across the nation. But from the hollows of the quarries to the cutting sheds where rock is sawed and carved into shape, laments can be heard that the local granite industry's end may soon be near.

As cheaper Chinese and Indian imports flood the American market, headstone and memorial manufacturers are shutting their doors, laying off workers, and cutting hours. Some manufacturers have begun using imported granite for carving and etching into headstones. Among the hardest hit have been the quarries. Last month, one of the region's largest employers and owner of the area's quarries, , laid off one-third of its quarry workers.

The job losses have cast a pall in this central Vermont village where granite remainders form towering gray hillsides, hulking granite slabs line roadways, and just about everyone has a connection to the granite industry - often going back generations.

"I've spent my whole life in this trade, and now the imports, which aren't as good quality, are threatening to take it all away," said Robert DuBois a 43-year-old stone-cutter from Graniteville who says his annual winter layoff has increased from two weeks to nine weeks because of the global competition. "I've got 10 years before I can draw my pension, but now I don't know that I'll make it."

Granite industry officials in Vermont say they began feeling the pinch from foreign imports, which typically cost one-third to one-half the price of Vermont-quarried stone, about a decade ago. The region has seen the closure of a half-dozen headstone manufacturers and lost 250 jobs in the last five years, leaving 1,200, according to a local granite trade association. The nation's other large headstone manufacturing center, Elberton, Ga., has also seen declines in sales and worker hours.

Compounding the industry's woes has been an uptick in cremations. With more people opting out of traditional burial, there are fewer buyers of headstones and memorials. While there has been an increase in the demand for mausoleums, which also tend to be made from gray granite like that quarried in Vermont, it has not been enough to offset losses in headstone sales, industry officials say.

For many, the ultimate sign that Vermont's gray granite industry was in trouble came recently when the Martin Luther King Foundation, a not-for-profit organization, purchased Chinese granite for a portion of the 4-acre, $100 million Martin Luther King Jr. memorial under construction on the Tidal Basin in Washington, D.C.

"Martin Luther King would not have stood for this," said Michelle Hebert, owner of the Graniteville General Store and Deli. "He would have cared about the conditions and lives of people in this country."

For years, granite was the economic lifeline of central Vermont. With one of the largest granite deposits in the nation, the area attracted thousands of immigrant workers from Scotland, Italy, Spain, and Canada. Population swelled in Graniteville and grand granite buildings rose in the adjoining city of Barre. At the industry's peak in the mid-1900s, the industry employed some 3,000 workers and counted a more-than-3,000-year supply of Barre Gray granite yet to be quarried.

Today, an ample granite supply remains, and the jobs quarrying it and cutting it offer some of the best pay in the area. At Rock of Ages, stone cutters and machine operators can earn $19 an hour, plus benefits. Yet, uncertainty pervades the factories where diamond-tipped saws thunder and heave as they cut the blocks. Sales of Vermont gray granite at Rock of Ages have dropped 20 percent in the last two years, and are 60 percent of what they were a decade ago, said Paul Hutchins, Rock of Ages vice president.

The company is trying to adapt. Rock of Ages, which also owns quarries in North Carolina, Pennsylvania, Canada, and the Ukraine, has focused its Vermont operation on the manufacture of mausoleums and statues. The company is also seeking to tout the skilled craftsmanship that its workers bring to stone carving. But the competition remains fierce overseas, where quarry workers earn as little as a few dollars a week. The cost of extracting and cutting the granite is so low that even after the cost of shipping it to the United States it is cheaper than Vermont's.

"One of the most difficult things is that young people are not going into the industry because they are concerned about whether the industry will survive," said Hutchins, whose father was a stonecutter but whose son has opted for another line of work.

George Clark, a drill operator, was among the Rock of Ages workers who learned of his layoff in January. Clark, who is 64, had a year and half to go before qualifying for his pension. He is hoping to be called back to work, but he is also going to night school to earn a certificate as an oil burner technician. Like many of his co-workers, Clark said he is angry and frustrated with the industry's turn of fortune. But he said he is at a loss as to what should be done. "Our stone was better quality than theirs, but theirs was cheaper," he said.

One company in Barre that says it is not ailing is Buttura and Gherardi Granite Artisans, an 80-year-old stone-cutting shop. The company head, Mark Gherardi, said he has had no layoffs and, in fact, has been hiring. Five years ago, the company began carving headstones and monuments out of imported granite.

"We want people to have the jobs in the United States," Gherardi said. "But it's a big world out there and if there are no barriers to entry for the imports, and if people want to buy them, we offer them."