Central Falls, R.I., struggles to step back from financial abyss 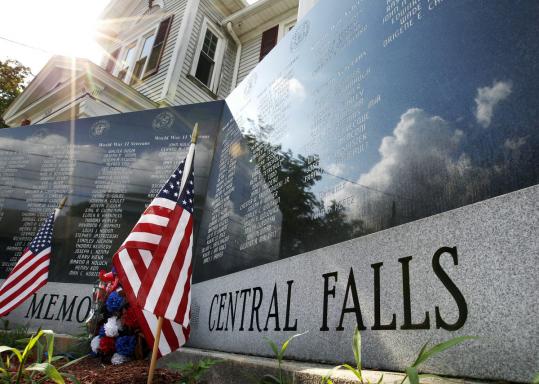 Major concessions are being sought from municipal workers of Central Falls, where flags had been planted at the city’s memorial. (Elise Amendola/ Associated Press)
By Erika Niedowski Associated Press / July 11, 2011

CENTRAL FALLS, R.I. - At the community center, the subsidized lunch for seniors is no longer being served. The pool has been drained. Health screenings have been cancelled. The locks to the building were changed last week, and not even the acting director is allowed inside.

The public library has gone dark too, a sign on the door at the top of the stone steps telling patrons to return books elsewhere - indefinitely.

Central Falls, one of New England’s most distressed cities, is on the cusp of filing for bankruptcy protection - a relatively rare step for municipalities even in tough financial times. Since 1980, only about 46 cities or towns in the United States have sought such protection, according to James Spiotto, an attorney in Chicago who is an expert in municipal bankruptcies.

Last year, the state took over Central Falls - a city of 19,000 residents with an unadjusted unemployment rate of 15 percent - stripping the mayor of his keys to City Hall and the rest of his authority. That move came after every teacher was fired at the underperforming high school, with most of them rehired later.

As state officials try to dig Central Fall out of its financial hole, negotiations are ongoing with labor unions and retirees and cuts are being sought from every corner of the budget. Without major concessions, bankruptcy is a very real possibility. Bankruptcy can take a toll on a city’s reputation and put stress on neighboring communities, which might have to step in to provide services.

“It’s a difficult, painful, and wrenching process,’’ said Richard Levin, an attorney who has been advising the city council in Harrisburg, Pa., which has been flirting with bankruptcy because of more than $280 million in debt on its trash incinerator, several times the size of the city’s annual budget. “Some people think bankruptcy is like a bath or a free pass. That’s not it at all.’’

Orange County, Calif., a wealthy community south of Los Angeles, became the largest municipality in US history to declare bankruptcy in 1994 in large part because of risky investments.

Vallejo, near San Francisco, went the same route in 2008. The city is poised to emerge from bankruptcy protection after renegotiating costly union contracts and restructuring its debt.

Legislation allowing broke cities and towns to seek bankruptcy protection under what’s known as Chapter 9 was born of the Great Depression when, according to the National Bankruptcy Review Commission, more than 2,000 municipalities defaulted. Entire jurisdictions were swallowed up by others.

States cannot declare bankruptcy, but 13 permit municipal filings and another 11 do so with some conditions. The Rhode Island General Assembly, in response to the crisis in Central Falls, last year rushed to pass legislation allowing for a state receiver to step in.

The 1.3-square-mile city north of Providence, where 60 percent of the population is Hispanic, faces $80 million in unfunded pension and benefits obligations and an estimated $25 million in deficits over the next five years. Officials said it was hard hit by a loss in state aid and the fact that expected collections from the Wyatt Detention Facility never materialized.

Mayor Charles Moreau and the city council sought help first, declaring that the city was fiscally insolvent. They welcomed help from a court-appointed receiver and say he was beginning to take appropriate steps. But since the state stepped in, they complain of being kept in the dark and charge that no fiscal progress has been made.

“You’ve had three receivers,’’ said City Council President William Benson, 65, who has lived in Central Falls all his life. “Not one of them brought a nickel into the city, and not one of them saved a nickel.’’

Retired state Supreme Court Justice Robert G. Flanders Jr., who was appointed receiver in February, said he is seeking almost $2.5 million in concessions - what he has called “big asks’’ - from police and fire department retirees. The goal is to restore stability outside of bankruptcy. Flanders said the talks have represented a good start.

Life in Central Falls, meanwhile, goes on. Trash gets picked up. Police officers respond to calls. But the city lost two of its anchors in the community center and library.

Tony Tager, parks and recreation director, was asked in April to step in as acting director of the center when the director and assistant director were laid off. Hours at the facility, which Tager said served an estimated 120 people a day, were cut back. Then, as of July 1, it closed.

The library is closed for business, too. The sign on the door referenced the poor condition of the children’s book section and said it was in the city’s “best interest’’ to close the library down.

Cities such as Central Falls face the possibility that the community will become a place where people don’t want to live and businesses can’t survive, said Chris Hoene of the National League of Cities.

“It can become a self-fulfilling cycle, battling a situation where you’ve got people and businesses that could potentially leave,’’ he said. “And that further undermines the revenue picture.’’