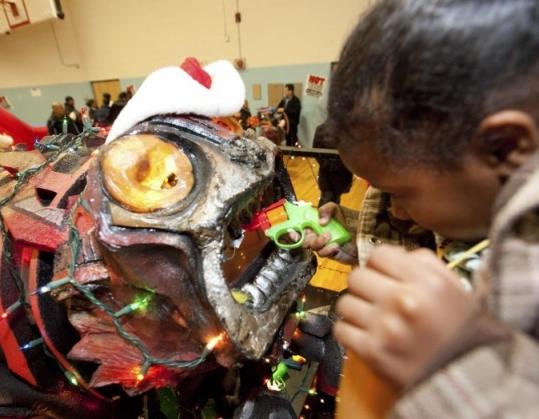 A girl who declined to give her name disposed of a toy firearm at the annual Toy Gun Bash in Providence. (Aram Boghosian for The Boston Globe)
By Maria Cramer Globe Staff / December 19, 2010

“It’s like a shotgun mixed with a rifle,’’ he said, as his mother, April, told him to stop pointing it at nearby children.

Soon it would be junk.

Dominic joined dozens of children yesterday at the annual Toy Gun Bash in the gymnasium of Pleasant View Elementary School. There, they lined up to toss their toy guns, from dainty purple water guns to camouflage-painted pistols, inside the Bash-O-Matic, a large black, foam creature with churning metal teeth and the shape of a cockroach spliced with a frog.

Prodded by Attorney General Patrick C. Lynch, who wore a fuzzy Santa hat, the children stared curiously as the Bash-O-Matic mashed up their guns and digested them into a plastic bin near its tail.

“He ate it,’’ squealed one delighted little girl.

’Tis the season for joy, peace, and grinding up plastic, orange-tipped AK-47s.

For seven years, Providence municipal and law enforcement officials have organized the event around Christmastime as a way to raise awareness of the dangers of playing with guns, real or fake. The event is a mix of the macabre and the playful, a children’s version of the gun buyback program in which adults trade firearms for gift certificates.

Yesterday, younger children ran through a rubber obstacle course while officials told the older children the story of a 14-year-old boy who police nearly shot after they confused his air pistol with a real gun.

In exchange for their toy guns, all the children received wrapped presents that were indisputably not violent — dolls, stuffed animals, and board games like checkers.

Some children were not thrilled with the trade.

Malik Hall, a round-eyed second-grader, looked apprehensive as he stood in line with his favorite toy, a thick, blue gun with plastic sword underneath the muzzle. The 8-year-old was furious when his mother, Amanda, told him he would have to give it up. Yesterday morning, he tried to hide it under his pillow, she said.

But when it was his turn, Malik strode dry-eyed and with quiet dignity to the Bash-O-Matic and fed it the gun. When his mother approached, he said nothing.

“You don’t want to talk to me?’’ Hall asked. He looked at her stonily and left to retrieve his gift.

Hall said she had no regrets. The 26-year-old mother of six said she has been trying to wean her only son off toy guns for years. In kindergarten, he brought a pop gun to school and shot at a classmate when the child refused to return his toy truck.

The police and representatives of the state’s children services department rushed to the school, and the boy was expelled.

“He had it in his pants like a gangster,’’ Hall said. Yesterday, she had six other of his guns to feed the Bash-O-Matic, but she admitted she had let Malik keep one, a small pistol that shoots rubber targets.

Many of the children at yesterday’s gun bash were not making anything like Malik’s sacrifice.

Some parents confessed that they bought guns just a couple of days before the event so their children could get a gift or watch the Bash-O-Matic do its work.

“He likes the feeling of breaking things without getting in trouble,’’ said Dominic’s mother, April Johnson, who bought his gun just a couple of days ago.

One parent was motivated by tragedy.

Ardella Powell, 28, who came with her four children, said she wants to see the guns destroyed because it helps her cope with the violent death of the father of her 11-year-old son. The man was gunned down in 2003.

About 200 children attended the gun bash, said Jim Baum, a prosecutor with Lynch’s office who helps run it. The event used to be held four or five times a year, but budget cuts have forced them to scale back the program, he said. City and state employees donate many of the toys, along with nearby businesses.

“We hope it makes a difference,’’ Baum said.

But adults should follow up with children to explain the complexities of weapons and violence so they can more efficiently counter the seductive image of guns in movies and video games.

“It’s one piece of what needs to happen around this issue,’’ said Levin, coauthor of “The War Play Dilemma.’’ “There is also this side of [children] trying to understand why are there guns there, and why do people use them? When kids are getting all kinds of other messages about guns, it’s a more complicated issue than just having one day about how guns are bad.’’