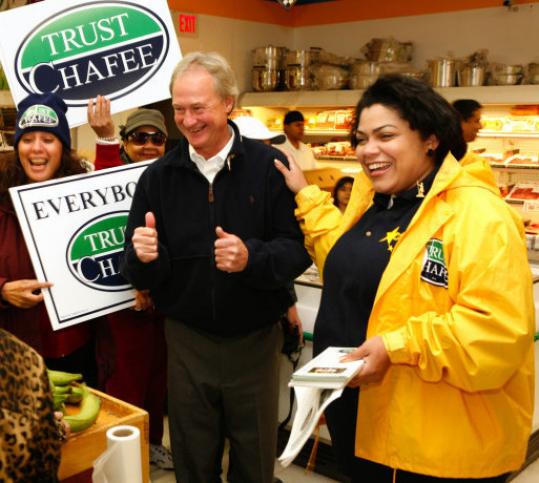 PROVIDENCE — Governor-elect Lincoln Chafee repeated a pledge yesterday to rescind an executive order on illegal immigration, but his office said he is discussing with State Police whether they should ask for immigration papers when there is reasonable suspicion that a person is in the United States illegally.

The order signed by Governor Don Carcieri, a Republican. sparked outrage in the immigrant and minority communities in part because it instructed State Police to check the immigration status of suspects in the course of investigations.

Chafee spokesman Mike Trainor said State Police want to cooperate with immigration authorities, and Chafee will discuss with them how best to do that. When asked whether police will still ask people for their immigration papers once the order is rescinded, Trainor replied: “That’s at the heart of what we’ll be discussing with the State Police.’’

Chafee’s pledge to rescind the order had been key to winning Hispanic support, an important demographic in Providence, which Chafee, an independent, carried comfortably in this month’s election.

Doris De Los Santos — head of the Rhode Island Latino PAC, which endorsed Chafee and worked for his election — said she understands that Chafee must be open to sitting down with different groups to discuss his positions. But she called for Chafee to adhere to the spirit of his promise to rescind the order.

“We really hope that the same spirit that moved the governor-elect to decide [the executive order] was a divisive action and one that wasn’t fruitful for the advancement of us as a community and as a state, that that would be the same driving force behind any other discussions related to the same issue,’’ she said.

Among the other provisions of the executive order that would be rescinded is one that requires the state and state contractors to use a federal database to confirm the immigration status of all new hires. The federal government and its contractors are required to use the database, and its use is required to some extent in 13 states, including Rhode Island.

Also yesterday, Chaffee chose Richard Licht, a former Democratic lieutenant governor, as his first nominee to lead a state agency, saying yesterday that he would submit Licht’s nomination next month to the state Senate for approval.

Chafee, a former Republican US senator, said Licht brought with him high intelligence, limitless energy, and a vast knowledge of the state.

“Everyone who has ever worked with Richard says the same thing: He gets things done,’’ Chafee said as he introduced Licht at a press conference.

Chafee left the Republican Party in 2007 and has said his independent status means he can work well with members of both major parties. His pick of Licht as director of administration does not just reach across party lines. The Chafee and Licht families have a history of being on opposite sides of the ballot.

Licht was lieutenant governor from 1984 to 1988, when he ran for Senate in 1988 against Chafee’s father, John. Licht lost that year and ran again in 2000, losing in the Democratic primary. Lincoln Chafee, who was appointed to fill his father’s seat upon his death in 1999, won that year. Licht’s uncle, Frank Licht, unseated Chafee’s father from the governor’s office in 1968.

At the press conference, Licht gave a nod to their family history, saying Chafee was “ignoring the politics of the past’’ and selecting people to serve based on ability, experience, and commitment.

The Department of Administration develops and administers the state budget, oversees state purchasing and personnel, and negotiates union contracts, among other duties.

Among the first order of business will be to get the state budget proposal to the General Assembly.