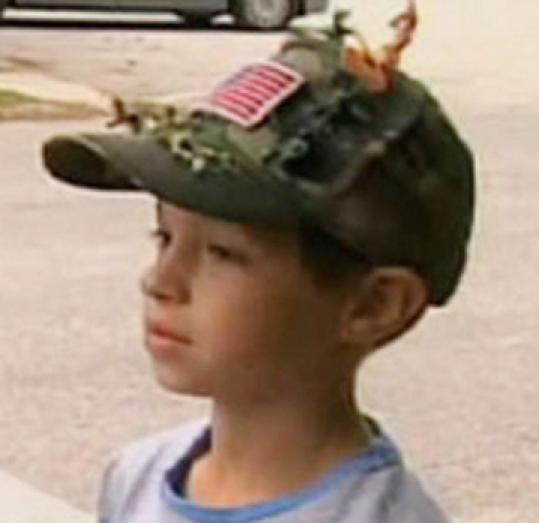 PROVIDENCE — Christan Morales said her son just wanted to honor American troops when he wore a hat to school decorated with an American flag and small plastic Army figures.

But the school banned the hat because it ran afoul of the district’s zero-tolerance weapons policy. Why? The toy soldiers were carrying tiny guns.

“His teacher called and said it wasn’t appropriate,’’ Morales said.

Morales’s son, David, 8, had been assigned to make a hat for the day when his second-grade class would meet their pen pals from another school. She and her son came up with an idea to add patriotic decorations to a camouflage hat.

Earlier this week, after the hat was banned, the principal at the Tiogue School in Coventry told the family that the hat would be fine if David replaced the Army men holding weapons with ones that did not have any, according to Superintendent Kenneth R. Di Pietro.

But, Morales said, the family had only one Army figure without a weapon (he was carrying binoculars), so David wore a plain baseball cap on the day of the pen pal meeting.

“Nothing was being done to limit patriotism, creativity, other than find an alternative to a weapon,’’ Di Pietro said.

The district does not allow images of weapons or drugs on clothing. For example, a student would not be permitted to wear a shirt with a picture of a marijuana leaf on it, the superintendent said.

The principal “wasn’t denying the patriotism,’’ Di Pietro said. “That just is the wrong and unfair image of one of our finest principals.’’

Yesterday, Di Pietro and the principal met with the retired commander of the Rhode Island National Guard at the commander’s request.

Lieutenant General Reginald Centracchio praised the school system for supporting the military in the past, including with a junior ROTC program.

But he said he disagreed with the decision to ban the hat and hoped it offered a chance for the school to review its policies.

“The American soldier is armed. That’s why they’re called the armed forces,’’ he said. “If you’re going to portray it any other way, you miss the point.’’

He said he intends to give David a medal to express veterans’ appreciation that he would pay tribute to their service.

Morales said her son was inspired to honor the military after striking up a friendship last summer with a neighbor in the Army.

Banning the hat “sent the wrong message to the kids, because it wasn’t in any way to cause any harm to anyone,’’ she said. “You’re talking about Army men. This wasn’t about guns.’’