Many seek ban as prostitution thrives in R.I. 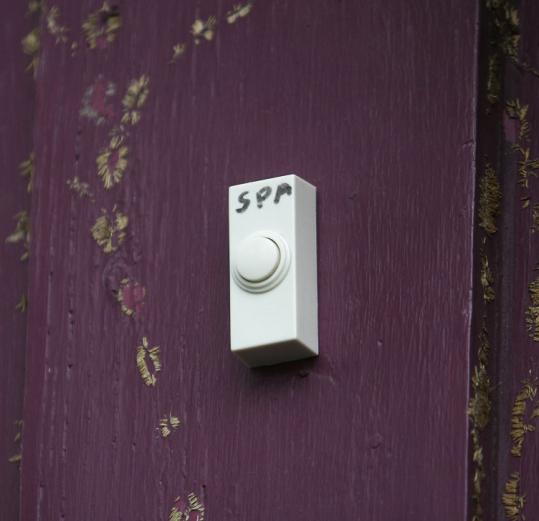 The doorbell at an alleged brothel near Providence’s Federal Hill is labeled “spa.’’ (Aram Boghosian for The Boston Globe)
By Sarah Schweitzer Globe Staff / August 13, 2009

PROVIDENCE - Down the block from the Italian cafes and the art galleries and the boutiques of Federal Hill, the plastic doorbell on a house is tagged with a handwritten note reading “Spa.’’ The door is locked, but when the bell is rung, a woman in velour sweat pants and high-heeled slip-ons cracks it open. Asked what sort of spa services the business offers, she says she can’t say.

“Manager back the 9th,’’ she tells a visitor.

The “spa’’ is among more than 40 operations in Rhode Island that act as thinly-veiled brothels, according to law enforcement and groups that monitor the spa business. The spas are well known and largely untouchable by police and prosecutors because state law permits prostitution so long as it takes place discreetly, outside public view.

Prostitution has flourished in Rhode Island, and the state has the distinction - a dubious one, many say - of being the only state in the nation to permit what is often referred to as indoor prostitution, a phrase that distinguishes it from streetwalkers’ solicitations. (In Nevada, the practice is permitted only in certain counties.)

Legislators have repeatedly proposed banning all prostitution in the state, without success. Yet, as the number of spas has exploded in recent years, pressure has mounted for change. This year, both the House and the Senate passed separate antiprostitution bills. Legislative leaders are now trying to hammer out a compromise with the backing of Governor Donald Carcieri.

The issue has drawn national attention to Rhode Island, a state that has found itself in the spotlight for a series of unflattering oddities - a capital mayor-turned-convicted felon, laws permitting underage strippers, an official name that legislators now are seeking to change from “the State of Rhode Island and Providence Plantations’’ to the “State of Rhode Island’’ because of concerns that plantations connote slavery.

But the prostitution issue has proved particularly charged, calling up questions of morality, women’s rights, civil liberties, and quality of life in towns and cities across the state.

Leaders of the push to ban indoor prostitution say Rhode Island is encouraging a dangerous profession, and embarrassing itself in the process.

“We are known for our fine colleges and for our restaurants and our tourism,’’ said Representative Joanne Giannini, sponsor of a bill that makes the penalty for indoor prostitution the same as that of outdoor prostitution - a misdemeanor, with a first offense punishable by up to six months in prison and a maximum $250 fine. “We don’t want to be known as the only state in the nation that has legal prostitution.’’

In addition to support from Carcieri, Giannini’s bill has won backing from Bishop Thomas J. Tobin of the Roman Catholic Diocese of Providence and state Attorney General Patrick Lynch.

Opponents also have a broad spectrum of support, including local chapters of the American Civil Liberties Union and the National Organization for Women, and a group of academics from around the globe who recently penned an open letter to the Rhode Island Legislature saying that, “compared to street workers, women and men who work indoors generally are much safer and less at risk of being assaulted, raped, or robbed.’’

Opponents also say the bill will put women at risk because arrested prostitutes would be under great pressure from prosecutors to testify in cases against human traffickers, who are believed to supply many of the women working in the spas. The traffickers, they say, would seek retribution against women who testify.

“I don’t think we should be coercing people into testifying and putting themselves in harm’s way,’’ said state Representative David Segal of Providence.

Prostitutes are not “evil,’’ Segal said, but rather are in desperate straits by dint of poverty or drugs and shouldn’t be treated as criminals.

But Donna Hughes, a professor of women’s studies at the University of Rhode Island and cofounder of Citizens Against Trafficking, said prostitutes who are arrested could be sent to alternative-sentencing programs that keep them out of prison, and protection could be provided to those who testify against traffickers. Such measures should be developed in concert with the new law, she said.

“People need to understand that there needs to be a lot more work than just passing the law,’’ she said.

Rhode Island began tacitly allowing prostitution after a 1970s lawsuit spurred legislators to rewrite old laws covering a variety of sexual behavior. The new law banned prostitutes from selling themselves on the streets but was silent about sex for money in private. That exclusion went largely unnoticed until 1998, when the state Supreme Court said the Legislature had intended to bar only prostitution in public.

After that, prosecutors sought to crack down on prostitution using other laws. They brought charges against alleged brothels for performing unlicensed massages, but the alleged brothels soon changed the names of their services to table showers and body rubs, which are not regulated activities, Hughes said. Thwarted, local authorities tried to force brothels out of business districts, saying that its workers were living in the businesses in violation of the zoning codes. But the alleged brothels moved to residential areas, Hughes said.

“The bottom has fallen out of any way of regulating them,’’ Hughes said.

As Rhode Island gained a reputation for leniency, the trade has thrived, officials say. According to Citizens Against Trafficking, 12 spas opened in the state through the end of June - compared with two in all of 2004.

Melanie Shapiro, a former student of Hughes’s and a cofounder of Citizens Against Trafficking, has extensively surveyed the brothels, identifying their locations, documenting the conditions under which their workers live, and tracking what johns say about the services performed at various spas.

On a recent afternoon, she took a visitor on a tour of the businesses that she says operate brothels blocks from the State House and around the corner from some of Providence’s most chichi neighborhoods.

“I read what the johns say about the women - I’ve seen the conditions of the women. It bothers me so much because I just feel like nothing can be done about it,’’ she said.