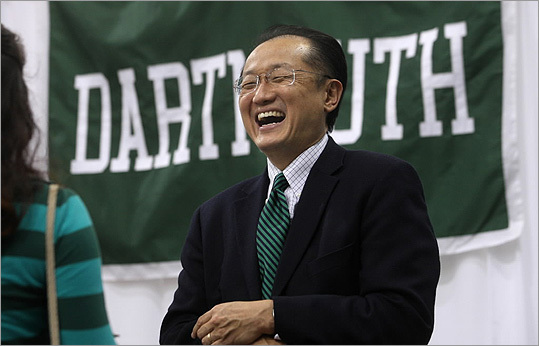 HANOVER, N.H. - When Jim Kim became president of Dartmouth College in 2009, he seemed like a good candidate to improve the school’s alcohol-soaked student culture. Arriving with a sterling resume in public health and a knack for cultivating tradition-bound alumni, he launched nationwide collaborative studies of campus drinking, earning praise for his careful, evidence-based approach.

A senior on leave this semester, Lohse confessed in an opinion article in the Dartmouth student newspaper Jan. 25 that over the years, and under Kim’s nose, his brothers in the Sigma Alpha Epsilon fraternity had been cruelly hazing pledges. Among the drunken initiation rites: a slosh through a kiddy pool of apparently feculent sludge and a meal of an omelet with regurgitated filling.

Now, on the eve of the first Dartmouth board meeting of the year, faculty are in revolt, students are pressing for change, and Kim - who has made no public statement about the allegations until now - finds himself in exactly the sort of tight spot he might have expected to avoid.

Asked if his opinions about student life had changed since he started the job, he said, “I guess the one thing that’s changed is that I didn’t realize how difficult the problem was.’’

Charlotte Johnson, the dean of the college, said Wednesday that the school has charged Sigma Alpha Epsilon with violating Dartmouth’s antihazing rules, which could lead to probation for the fraternity. Several sources with direct knowledge of the situation said the school has named and is charging several students individually, including Lohse.

Professors are angry about the college’s handling of the allegations and say targeting Lohse could dissuade other students from reporting similar incidents. Many of them accuse Kim of abdicating leadership on the issue, and a fourth of school’s faculty have signed a petition calling for the banishment of single-sex fraternities.

“Why do we still have a social system that is from the 19th century?’’ asked Peter Hackett, a theater professor. “As an alum and faculty member, I’m just waiting for someone from the administration to step forward and defend what everyone knows is broken.’’

But Kim said an attempt to drastically reform the fraternity system probably would fail under withering opposition from trustees and alumni.

“The minute you think as an administrator that by fiat you can institute culture change, the only thing you’ll get is mocking and ridicule,’’ Kim said. “And at that point it will be well deserved.’’

Abolition of single-sex fraternities might also drive hazing and drinking further underground, he added: “In places where they’ve gotten rid of the Greek system, it has quickly formed off campus, unofficially. Then they begin to drive and drink, and the level of danger just goes up.’’

Hazing is common at colleges and even high schools. National surveys suggest 47 percent of students come to college already having experienced it.

At Dartmouth, hazing has long been entrenched, and it is not unique to Greek organizations. Three months ago, the college charged an athletic team and a singing group with hazing, along with two fraternities. But the school’s social scene is Greek-dominated; about 60 percent of its students are members, and most parties take place in fraternity basements.

Dartmouth’s antihazing policies are strict. Hazing violates New Hampshire law, the campus conduct code, and a written contract students must sign to join Greek organizations. To witness hazing and fail to report it is also a violation, even if students are participating voluntarily.

“We’ve all heard horror stories from students crying in our offices,’’ said Annelise Orleck, a professor of history. “And there’s a direct connection between the dehumanizing of pledges and their dehumanizing of other people, as in sexual assaults. It’s all of a piece.’’

Lohse first told the administration about hazing at Sigma Alpha Epsilon in fall 2010. But because he would not go on the record, Johnson said, administrators’ hands were tied. Police investigations of the fraternity that fall found nothing.

Almost immediately after Lohse’s column was published in January, fellow students began to question his credibility, noting that he has been arrested on drug and assault charges. (He would not comment for this report because he has an exclusive agreement as a source for Rolling Stone, which is expected to publish an investigation in a few weeks.)

But Lohse had many advocates among the faculty, who have voted overwhelmingly and repeatedly in the past to abolish single-sex Greek organizations.

Some students on the university’s bucolic campus said Wednesday that they would support that, as well.

“Many of these fraternities have been kicked off campus and then let back on after their alumni donated a lot of money,’’ said Stewart Towle, a senior who said he joined a fraternity as a freshman but has since left. “The college needs to suck it up, dip into the endowment, buy these houses, and turn them into inclusive spaces.’’

On the other hand, he added, “at the end of the day the college would have to create a space for underage drinking, which would obviously be difficult.’’

Other students said they would like the college to simply strengthen the punishment for hazing.

“I’m not one for starting a battle you can’t win,’’ said Dani Levin, a sorority president. “But the message students get is that certain pockets of campus have impunity. So instead of putting people on probation, derecognize chapters. Show that this type of behavior isn’t going to go unnoticed.’’

Disciplinary hearings as a result of Lohse’s allegations are expected to begin this spring, several sources said, although Johnson and Kim would not comment on whether or which individuals have been charged, citing federal privacy laws.

Johnson did say “there is a precedent’’ for charging students who come forward with confessions, as Lohse did, and that sanctions might be lessened in those cases.

The school is also forming a hazing task force of students, faculty, and staff. In the interim, Kim will be taking a tack that resembles his approach to binge drinking: studying how other campuses cope.

“We’re looking at campuses across the country and asking, have any been successful at really reducing hazing? And the general answer is, ‘Well, we’re not sure,’ ’’ he said.

“The whole point of hazing is to do it out of the view of administrators and people of power. . . . It’s just so hard.’’