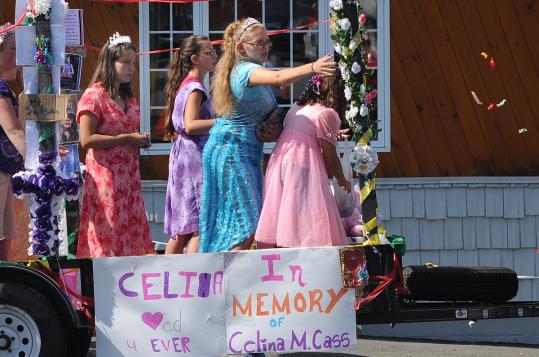 STEWARTSTOWN, N.H. - The parade theme was TV shows, and almost every float fit the bill: A tractor hauled a faux 18-wheeler with a sign that read “Ice Road Truckers,’’ girls on a pink wagon were contestants from “The Bachelorette,’’ and women from a nursing home waved from a wagon labeled “The Price is Right: Barker’s Beauties.’’

But one float was different.

Covered in a rainbow array of bows, garlands of pink and white flowers, and photos of a girl with big brown eyes and a sweet grin, that float was dedicated to Celina Cass, the 11-year-old whose body was discovered in a nearby river last week.

Residents of Stewartstown, a rural community less than 2 miles from the Canadian border, came together Friday and yesterday for Stewartstown Day, an annual event that features a bake sale, a soapbox derby, a parade, the coronation of a Stewartstown Queen - and this year a ceremony in remembrance of the child they lost.

“It is good for us to recognize that life does move on, but we will never forget that a precious child was taken from her family and her community,’’ said Matthew Coons, pastor of Independent Baptist Church in West Stewartstown, at the ceremony.

And while members of this community await word on what happened to the shy fifth-grader who loved cats and basketball, some residents said they felt the weekend’s festivities marked the community’s first step toward moving on.

“Today has got everybody in the right frame of mind,’’ said Angela Wheeler, who lives just a few blocks away in Canaan, Vt., and brings her four sons to Stewartstown Day every year. “The atmosphere is real different than what it’s been like for the last couple weeks.’’

Cass was last seen in her West Stewartstown home on the night of July 25.

Her disappearance prompted a weeklong search that involved more than 100 law enforcement officers from the FBI, state police from around New England, and the Royal Canadian Mounted Police.

The search concluded Monday morning when divers found the girl’s body in the , a quarter of a mile from her home.

Jane Young, New Hampshire’s senior assistant attorney general, said during a phone interview yesterday that officials are still looking at the case as a criminal investigation.

An autopsy performed Tuesday was inconclusive, and officials are waiting for the results of a toxicology report.

Investigators were in and out of the Cass home Wednesday and towed a silver Ford pickup truck. Young said the search of the house has been completed.

Walter Laro, 67, Cass’s grandfather, said yesterday from his home in nearby Columbia, N.H., that her funeral will be tomorrow afternoon in Lancaster, about an hour south, with only family and close friends in attendance. Cass’s body was cremated and her remains placed in a pink urn.

A service of remembrance will be held at 6:30 p.m. tomorrow at a community school in Canaan, during which friends and relatives will share memories of Cass and watch a slideshow of her life.

Bill Allen, the town’s emergency management director, thanked community members in a speech Friday night for helping with search efforts by donating food and supplies and for holding nightly vigils during the search effort.

“We’ve gone through some pretty tough times these past few weeks,’’ Allen said. “When the North Country goes through trying times, we always come together to get it done.’’

In attendance at the gathering were Cass’s mother, Louisa Noyes; her father, Adam Laro; and her sister, Kayla, 13.

Walter Laro said his son was told by doctors that it was unwise for him to leave the house - he is recovering from a heart condition that kept him hospitalized for 18 days - but he insisted on making it to the dedication ceremony.

“We do appreciate what that town has done for this family,’’ Walter Laro said.

Absent from the gathering was Cass’s stepfather, Wendell Noyes, who friends of the family have said checked himself into a hospital.

Few vestiges remain of the tragedy that struck this town two weeks ago.

The picnic table covered with candles, cards, stuffed animals, and photos of the girl had been removed from the town’s park. Many of the signs advertising a missing child were gone.

And the buzzing of helicopters - a sound that became so familiar during the exhaustive search operations - now came from a commercial helicopter pilot offering five-minute rides for $25.

The pilot, Jared Kaufman, said he was not sure he would be able to bring his helicopter to Stewartstown Day.

Until Thursday, he said, there was a restricted flight zone above the town because of the search and investigation.

Michelle Rancourt, 30, and her 5-year-old son, Peyton, had never been in a helicopter and asked the pilot to circle over the house where the boy’s grandfather lived.

The thrill of soaring over their town was a good antidote to a very sad week.

“The kids definitely needed something to lift their spirits,’’ Rancourt said.

As Canaan resident Margaret Knapp, 63, sold cupcakes and whoopie pies at the bake sale fund-raiser for the North American Martyrs Parish, she said she noticed that attendance was a little lighter this year. For some, she said, it was hard to celebrate after two weeks of heartbreak. But for others, the celebration was a welcome relief.

“Our community needs this,’’ Knapp said.

Leaning in and lowering her voice, she said, “And Celina is here with us.’’