Search for clues at family home 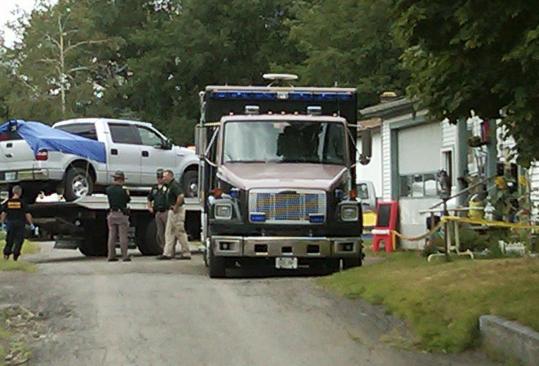 WEST STEWARTSTOWN, N.H. - Investigators searching for clues in the death of Celina Cass homed in on her family’s apartment here yesterday, scouring the premises and seizing a pickup truck from the driveway.

A day after an autopsy on Celina’s body failed to determine how she died, police and crime scene specialists descended on the home where the 11-year-old lived with her mother, stepfather, and older sister and was last seen before she disappeared July 25.

Celina’s body was recovered Monday from the , just a quarter-mile north of her home, after a meticulous search of the area. Authorities consider her death suspicious, and have launched a criminal investigation.

Jane Young, New Hampshire’s senior assistant attorney general, declined to provide details about the status of the investigation yesterday or say whether the girl’s family members are considered suspects. She would not identify the owner of the truck, a Ford F-150, seized from the family home.

The three-story multiunit house, which stands along the town’s major thoroughfare, was sealed off with crime tape yesterday, as investigators, some wearing blue surgical gloves or holding cameras, shuttled in and out of the family’s apartment.

The uncertainty around her death has unnerved this small town near the Canadian border, and yesterday Celina’s biological father, who did not live with the girl, and grandmother said they are desperate for answers.

“It’s a puzzle to me right now,’’ said Adam Laro, 45. “If there’s somebody out there who did it, I hope they can catch them. If they get away with this one, they’ll get away with another.’’

Laro, who was in the hospital with a heart condition when Cass disappeared, said he learned she was gone when she saw his daughter’s school picture on the morning news.

“I thought, ‘That looks like a picture of my daughter,’ ’’ Laro recalled in an interview from his home in Colebrook, about 20 minutes from Celina’s house. “And then I realized that it was my daughter.’’

Laro said he always enjoyed when Celina and her sister, Kayla, 13, would come visit. They would fish in a nearby pond, he recalled fondly, and splash around in the shallow water.

But recently, they had been too busy to visit much. He would call them and see if they were free to come over for the weekend, but they usually had plans, either playing sports or hanging out with friends.

When he did see them, he made sure to ask them how they were doing and see if they were having any problems at home, he said.

“I always told them, ‘If you ever have problems, give Daddy a call,’ and they’d always say they were all right,’ ’’ Laro recalled. “I figured they were happy enough, and they were safe. At least, I thought so.’’

As he talked about his daughter, Laro spoke slowly, often pausing between thoughts and struggling to find the right words. He looked exhausted, with heavy bags around his eyes.

He said he wonders if he should have been more persistent in asking his daughters about their home life.

“Before, I thought everything was OK,’’ he said. “But now, I don’t know. Maybe if I had pushed more, this wouldn’t have happened.’’

The autopsy on Celina’s body was inconclusive, pending further testing and toxicology results. Young said she did not know when the results will be ready, but said officials are making the case a top priority.

Earlier this week, Young said Celina’s death was considered a crime because of the condition of the body, but said she had to withhold details to preserve the integrity of the investigation.

She has declined to say whether the body was wrapped in anything, but said police were trying to determine where she was dumped into the river.

Marcia Laro, Celina’s grandmother, said that the girl’s body has been returned to the family and that funeral arrangements are being made. The service will be private, she said.

“She was such a unique little girl,’’ she said. “She was adorable, lovable, trusting, happy.’’

Marcia Laro said she does not understand why Celina’s mother has not contacted her former husband since Celina vanished.

On Tuesday, the day after Celina was found dead, her sister Kayla came to visit, her father said. They sat by the pond in the backyard and fished. She has held up pretty well, he said, as well as could be expected.