Of time, tide, and a father’s note 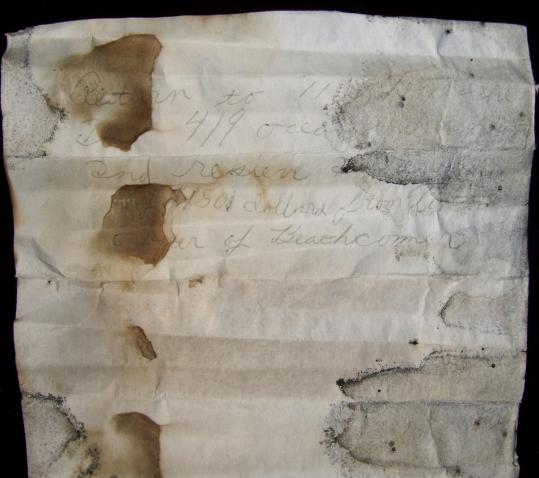 Two decades after her father died, Paula Pierce received a message from him, one that traveled thousands of miles and across 50 years to reach her.

It came on frayed paper, pocked with pinholes and suffused with stains, a brittle note preserved in a glass Coke bottle that Atlantic currents whipped from Hampton Beach, N.H., to sand dunes along the coast of the Turks and Caicos Islands in the Caribbean.

Despite the gravity of seeing his handwriting after so many years, in the end, it was the light-hearted gesture of the message, a prankish whimsy, that touched her more deeply than she thought possible.

“It’s amazing that it was still in one piece and that I’m still here,’’ said Pierce, reached by telephone at the motel her father started in Hampton Beach in 1960, around the same time he decided to play a joke on his late wife by tossing a bottle into the sea. “It’s like a synchronicity with the universe, like it was all meant to be that this made it back to me.’’

The small bottle washed up on a patch of sand about 100 feet from the turquoise waters off the main island.

It was half-buried, covered in moss when Clint Buffington, a tourist from Kentucky, happened upon the bottle and discovered a note inside.

In some ways, it was no trick of fate that brought the bottle into the hands of Buffington, an amateur sleuth who for the past few years has combed beaches for messages in bottles. He said he has found about 40 such bottles since his first discovery in 2007 on a previous trip to the Turks and Caicos, where he has found everything from airplane wings to toilet seats on the islands’ beaches.

“It’s a romantic, whimsical gesture, and I love being the recipient of that gesture,’’ said Buffington, 26, who teaches writing at the University of Kentucky in Lexington and blogs about the meaning of the messages in the bottles he finds.

“I think there’s something reassuring about putting a message in a bottle,’’ Buffington said. “It becomes like an immortal memento, like it’s out there forever, until I find it, of course.’’

He added: “People don’t expect others to find it. I like that.’’

Aware of the fragility of his discovery, Buffington delicately packed up his prize, knowing he would have only a brief window to explore its content before contact with air dried the paper and made it even more brittle. He says he has found messages in bottles from as far away as Portugal and France, but never one this old.

So Buffington chose not to unseal it until he got home, where he called a local television news station to help him document his finding.

He opened the bottle on camera, unfurled the mottled note, and deciphered the following cryptic message: “Return to [illegible] 419 Ocean Boulevard and reseive [sic] 150 dollars from Tina, owner of the Beachcomer [sic].’’

Buffington made it his mission to find the sender of the message or, failing that, a living relative.

He searched online for the address, but quickly found that there are countless ocean boulevards in the United States.

When he linked the address to Beachcomer, which he inferred was really Beachcomber, he found a listing in Hampton Beach.

After contacting the local Chamber of Commerce, the county clerk, the tax assessor’s office, and a local newspaper, he found Paula Pierce.

He learned that she had taken over the motel after her father Paul died in 1990, and that Tina was her mother. When he sent her pictures of the message, she quickly identified the handwriting and poor spelling as her father’s.

She thinks the message was meant to be a joke on her mother, a fastidious woman who ran the motel and guarded every penny the family earned. A $150 reward would have been big money back then.

“I couldn’t believe he did such a funny, lighthearted thing,’’ she said.

The message came to her at a particularly stressful time, as she struggled to keep the motel in business.

“It was like he was reaching across the great unknown and telling me to relax, to hang on through the duress and adversity, that everything would be OK,’’ she said.

“It left me with a really good, warm feeling.’’

For his part, Buffington hopes to display the message in an exhibit with other bottles he has found.

He said he did not ask for the reward, which he understood was a joke.