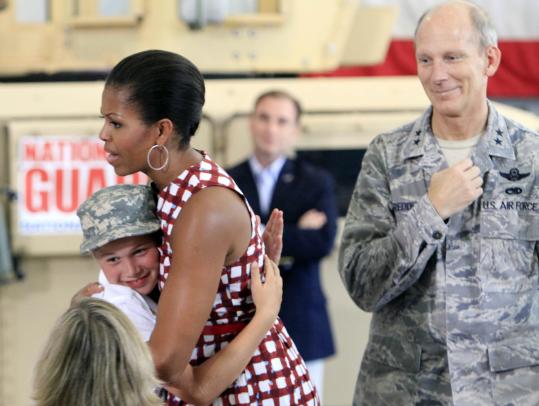 CONCORD, N.H. - Military families in New Hampshire got a boost yesterday as Michelle Obama and Jill Biden offered their thanks at a National Guard cookout.

The visit was part of their Joining Forces initiative, designed to support the families of those who have served and continue to serve in the armed forces. Among other things, Mrs. Obama said steps can be taken to make the transition easier for military families who move from base to base.

Mrs. Biden, whose son Beau Biden is a captain in the Delaware Army National Guard, said it was important for all Americans to understand the sacrifices military families make to support their loved ones in the services.

She announced a Joining Forces Community Challenge, and invited those attending to nominate for special recognition any group or individual making a difference in the lives of military families. “We’ve seen some incredible examples of Americans helping out with child care for military families, lending a hand with accounting during tax season, and hosting baby showers for expectant military moms, and we want to formally applaud these efforts,’’ she said.

Biden spent the first half of the day at an event in Portsmouth called Operation Thank You, which raised money for a fund that helps military families in need.

In Concord, the women kept their comments brief and spent most of their 90-minute visit going table to table among the roughly 100 soldiers and family members. Lieutenant Klee Dienes attended with his wife, Unity, and three of his five children, ages 2, 5, and 9.

He acknowledged it was hard on his wife when he was stationed in Iraq. “It’s not easy on any of them,’’ he said.

Dienes and his wife said it was an honor and a thrill to meet Mrs. Obama; Unity received a big hug from her.

“She was just a real person. She just seems like a mom that you can relate to,’’ she said.

Margaret Corey, whose husband, Commander Peter Corey, is in Kuwait with the 197th Fires Brigade, said the New Hampshire National Guard has come a long way in supporting military families over the years.

“It’s made it so much easier,’’ she said. Her children are mostly grown but she said she feels for the wives at home with young children.

“It’s nice to be recognized,’’ she said.