Romney keeps up the recession drumbeat 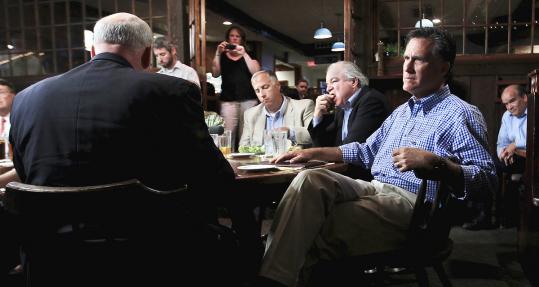 WOLFEBORO, N.H. - Mitt Romney continued to assert yesterday that President Obama prolonged the recession and made it worse, even while acknowledging that he had jettisoned economists’ accepted definition of recession - a shrinking economy - in favor of his own.

The recession ended in June 2009, just six months after Obama took office, according to the National Bureau of Economic Research, a Cambridge, Mass.-based organization charged with determining when recessions begin and end. By that measurement, the country’s economy began to grow again, sluggishly, early on Obama’s watch.

Nonetheless, at a town hall-style meeting yesterday at a Wolfeboro restaurant, the Republican candidate for the presidential nomination continued hammering his recent theme that Obama’s policies “made the recession deeper and made it last longer.’’

As evidence, he cited the costly stimulus package - approved by Congress four months before the recession ended - which Romney said created public sector jobs but did not trigger private-sector hiring. He also pointed critically to passage of the healthcare overhaul legislation and the Dodd-Frank financial regulatory overhaul - both approved a year after the economy emerged from recession. And he cited unsuccessful Democratic attempts to pass a cap-and-trade bill to reduce greenhouse gases and to allow unions to organize more easily.

All of those things, Romney said, created a negative climate that damaged the economy by inhibiting private-sector investment. It is a potent critique, giving him a way to portray all of Obama’s largest first-term legislative accomplishments as economic failures.

Yet the former Massachusetts governor and Harvard-trained equity fund executive is describing the economy in ways that some independent groups and economists say is misleading, or at least out of date.

Over the course of recent weeks, Romney has charged in a variety of settings - including in a nationally televised debate - that Obama made the recession “worse.’’ At a press conference last Thursday at a shuttered factory in Allentown, Pa., Romney created a stir when he said he had never said such a thing.

“I didn’t say that things are worse,’’ Romney said in Allentown. “What I said is that the economy hasn’t turned around.’’

His aides later said he was responding to a question that he thought was about the stock market. In appearances in the last two days in New Hampshire, he resumed the attack.

“He didn’t cause the recession. But he didn’t make it better. He made it worse,’’ Romney told nearly 100 people yesterday during the town hall meeting at Bayside Grill and Tavern.

He also appeared to use the terms “recession’’ and “recovery’’ to describe the current state of the economy, an apparent contradiction, at least in economic terms. The economy, he said, “has not created the jobs we should have,’’ adding that 20 million Americans remain out of work or underemployed.

A spokesman for Obama defended the administration’s record over the past two years, saying it helped “put us on a path to recovery.’’

“President Obama brought the nation back from the brink of another Depression,’’ said Ben Labolt, a spokesman for the Obama campaign. Labolt criticized Romney’s job-creation record as governor of Massachusetts. “Governor Romney is proposing a return to policies that led us into the recession,’’ he added.

While economists say Romney is incorrect to say the president was to blame for the depth of the recession in his first six months in office, there is broad disagreement over his broader assertions about how Obama’s policies affected the recovery.

“The economy is not healthy, and there are unpopular bills Obama was responsible for passing,’’ said Cornelius Hurley, director of the Morin Center for Banking and Financial Law at Boston University. “But whether A causes B is questionable. He’s saying A caused B, but he’s leaving out an important point, which is that the economy was in the tank before those bills were passed.’’

But Martin Feldstein, a Harvard professor who was chairman of the Council of Economic Advisers under President Reagan, laid the blame for the sputtering recovery on Obama last month in a column in the Wall Street Journal.

“The policies of the Obama administration have led to the weak condition of the American economy,’’ wrote Feldstein, who did not return calls yesterday. “Growth during the coming year will be subpar at best, leaving high or rising levels of unemployment and underemployment.’’

“The bill dramatically added to the regulation burden of the financial industry, so bankers and people in financial services pull back,’’ Romney said. He would not say whether he would seek to repeal the legislation as president, and when asked which parts of it he opposed, he would not be specific.

“It’s 2,000 pages. I’m sure there’s something in there that’s good,’’ Romney said. “I’d be happy to take a look at it perhaps line by line at some point and lay out the provisions that I think are unfortunate.’’

But several economists said Wall Street firms and big banks affected by the legislation represent just one slice of the job market.

“I cannot imagine that Dodd-Frank has had much of an impact on job creation,’’ said Gary Burtless, an economist at the Brookings Institution and formerly of the US Department of Labor. “If it has had an effect, it has been on financial services industry, and those companies have returned to profitability.’’