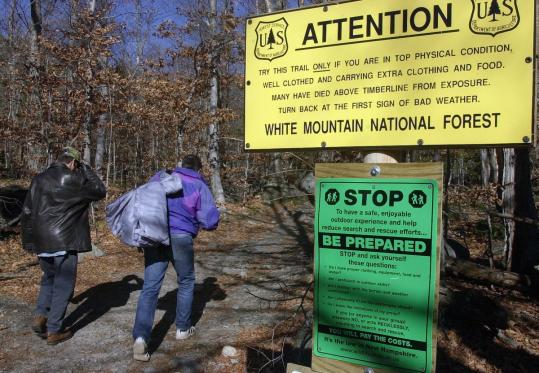 CONCORD, N.H. — New Hampshire authorities say two hikers rescued from Mount Monadnock are the classic example of how lack of preparation and proper gear can lead to dire straits.

The pair ended their hike to the summit Tuesday when they realized night was fast approaching. But without a flashlight to guide them they veered off the trail on their descent.

Then the torrential rain began, and the two were soaking wet and chilled when two New Hampshire Fish and Game officers reached them about 11:30 p.m. It took another hour to lead them to safety.

“They didn’t have anything with them and picked up the cellphone and called for the cavalry to respond,’’ said Fish and Game Lieutenant Todd Bogardus, who is dubbed “the search and rescue guru’’ by colleagues. “They had no lights or rain gear. Simple things like that can get people out of their own predicament.’’

So far this year, Fish and Game officers have also rescued two hikers caught in white-out conditions on Franconia’s Mount Lafayette in January, two from Pisgah State Park in Hinsdale, and a teenager who became disoriented during a sunset walk near her Sharon home and lost the trail in April.

Bogardus said hikers need to prepare for the unexpected, especially radical changes in weather at higher altitudes or a sprained ankle or other injury that can derail even a short hike.

“What they believe will be a simple half-hour hike turns into an ordeal if they twist an ankle,’’ Bogardus said. “They need to be ready to stay out there for a while.’’

He advocates that hikers refer to the hikesafe.com website for detailed information about what to pack and other vital information. The site lists the essentials as a map, compass, warm clothing, matches, extra food and water, flashlight or headlamp, first aid kit, whistle, rain and wind jacket and pants, and a pocket knife.

That list does not include a cellphone or GPS. Bogardus said the downside to cellphones is they make it too easy for people not to plan. He also said a common mistake hikers make is leaving their cellphones on and the phones search for service, quickly draining the batteries. He suggests hikers leave their cellphones off so they have them in the event of an emergency.

“Cellphone reception is very spotty when you get up into the mountains,’’ Bogardus said. “They can’t be relied on.’’

Bogardus said that before setting out, hikers should check the weather, make sure they have the right gear, and know about the area they are going into. He said they also need to let someone know where and when they are going and when they expect to be back. Groups who climb together should stay together, he said.

“We get numerous calls throughout the year, and it’s something that simple,’’ said Bogardus. “Half the group came out, and half the group took a wrong turn.’’

Hikers’ failure to prepare can amount to a costly lesson. New Hampshire state law allows officials to charge hikers if negligent or reckless actions prompt an extensive search. Bogardus said he was aware of one case in which recklessness cost a hiking party on Monadnock about 10 years ago. He said it was late in the day with bad weather coming, and a park ranger told the party they were not prepared and to turn around. The party ignored him and needed to be rescued.

In 2010, Fish and Game billed hikers a total of $9,891 for five rescue missions. In 2009, the agency billed $43,388 for 10 missions, but that included almost $26,000 billed to a Massachusetts teenager. The Eagle Scout spent three nights on Mount Washington in April 2009 before being rescued. The state later waived that fee.