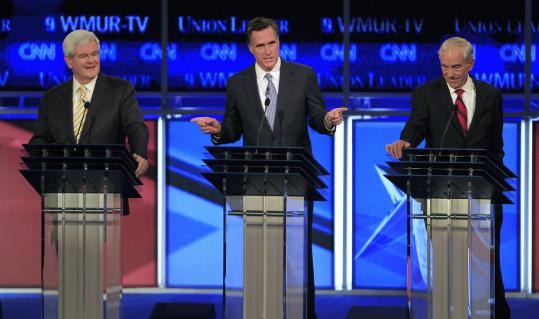 “When 14 million Americans are out of work we need a new president to end the Obama Depression,’’ said former House speaker Newt Gingrich, who was seeking to jump-start his campaign after three weeks of missteps.

“This president has failed,’’ said Romney, who has topped national polls recently and dominated a N.H. voters poll released by the Globe Sunday. “And he’s failed at a time when the American people counted on him to create jobs.’’

It was the first debate for Romney, giving Republican opponents their first chance to confront him directly. Yet his rivals largely avoided criticizing him, even on his greatest perceived vulnerability: his shepherding of the health care overhaul in Massachusetts as governor.

Former Minnesota governor Tim Pawlenty, who on Sunday said Obama based his national plan on the Massachusetts model and derisively called it “Obamneycare,’’ was given opportunities to take such criticism to Romney directly. He declined every one of them.

“I just cited President Obama’s own words that he looked to Massachusetts as a blueprint,’’ Pawlenty said, after being pressed four times by the moderator, CNN’s John King, about his tweaking of Romney the day earlier. “Using the term Obamneycare was a reflection of the president’s comments.’’

For his part, Romney, also a candidate in 2008, reiterated that he would repeal the national health care law if he is elected, tagging it “a huge power grab by the government.’’

Pawlenty’s backpedaling from his previous criticism set the tone early in the debate. Romney was situated in the center, with three opponents on each side, but didn’t face incoming fire from either direction.

Needing to spend little time and energy defending his own record, Romney was able to focus more on Obama. He generally avoided making comments that strayed from those he has recently delivered on the stump.

The evening also allowed him to look comfortable with the mantle of front-runner; at one point he said he can’t wait for the opportunity to debate the president on the health care issue. Earlier in the day, his campaign released a Web ad that displays a date at the end — Nov. 6, 2012. That is the day of the general election, not the nominating contest he would have to win first.

Questions for the debate, held at Saint Anselm College and sponsored by the Manchester Union Leader, CNN, and WMUR, were offered by Granite State voters and journalists. The moderator, King, a Dorchester native, then followed up with questions that sought to refine the candidates’ responses or probe a different angle.

Although the debate was heavy on prescriptions for righting America’s economy, it featured several lighter moments prompted by King — Romney, for example, said he preferred spicy chicken wings over mild; Pawlenty said he preferred Coke over ; and Gingrich said he preferred “American Idol’’ over “Dancing with the Stars.’’

King asked if the candidates could identify one success for Obama. Representative Ron Paul hesitated, then, in his slow Texas drawl, offered, “Well, that’s a tough question,’’ as the audience chuckled.

The debaters had stiff competition for viewers, with the puck being dropped at the Boston Garden for the start of the - Stanley Cup tilt just after former US senator Rick Santorum of Pennsylvania led off the introductions of the candidates.

That prompted one of the largest eruptions of applause.

Romney has assembled a fund-raising and campaign network superior to others in the race. But many conservatives in the party remain distrustful of him. Polls show a broad swath of undecided voters.

For the most part, however, Romney’s rivals focused on the perceived failings of Obama, particularly on his handling of the economy.

“We have a crisis of the three Es,’’ said businessman Herman Cain. “The economy, entitlement spending, and energy.’’

Throughout, Paul was a forceful and emphatic defender of the private sector and self-reliance of the population, and called for removing most of government’s regulatory roles.

In the course of the debate, Representative Michele Bachmann of Minnesota, a darling of the Tea Party movement for her fiery populist and antigovernment rhetoric, announced she is filing papers for a run for the presidency and will have an official announcement soon. The other six candidates had already declared their intention to run.

Among the few times Romney appeared uncomfortable was at questions around social issues.

“We ought to be talking about the economy and jobs,’’ Romney said, when asked whether he would reinstate the military’s policy of barring gays from serving openly in the military. (He criticized the decision to repeal the policy but did not say what he would seek to reinstate it.)

All candidates except Paul and Cain said they favor a national constitutional amendment that would ban gay marriage.

Santorum, who is passionate in his opposition to abortion, was asked whether voters should be skeptical of Romney’s shifted views on the topic. But like others, he declined to sharply criticize Romney by name on a topic that has caused Romney problems in the past.

“I think an issue should be looking at the authenticity of a candidate and their record over time,’’ Santorum said, in only a subtle jab. “You can look at my record.’’

“I believe people understand that I’m firmly prolife,’’ Romney replied. “I believe in the sanctity of life from the very beginning until the very end.’’

King asked if anyone thought abortion would be an issue for Romney in the campaign, and no one spoke up.

Although the economy was a key focus of the debate, the issue of whether US forces should remain in Afghanistan came up. Romney said “it’s time to bring our troops home as soon as possible.’’

In a gaffe, he also said the troops should come home only once “the Taliban military’’ is able to control the country, quickly correcting himself to refer instead to the Afghanistan military.

“Only the Afghanis can win Afghanistan’s independence from the Taliban,’’ he said.

There also was relatively little defense of the House Republicans’ plan to partially privatize Medicare, which has been politically unpopular.

“If you can’t convince the American people it’s a good idea, maybe it’s not a good idea,’’ said Gingrich, who has been criticized for hinting that the plan was “right-wing social engineering,’’ then backpedaling and saying he supported most of its elements.

Pawlenty, who previously said he would sign the proposal if he were president, stressed last night that he would have his own plan to reform the popular entitlement program.

Former Utah governor Jon Huntsman, who has hinted that he expects to enter the race soon, decided not to participate in the debate. Several other candidates — including former vice presidential nominee Sarah Palin, Texas Governor Rick Perry, and former New York City mayor Rudy Giuliani — have been mentioned as possible candidates but have yet to make a decision and did not participate last night.

But inside the debate, the candidates sought to project a sense of Republican unity.

“Anyone on this stage would be a better president than President Obama,’’ Romney said. “Any one of these people . . . will serve as a president of distinction.’’

Globe correspondent Shira Schoenberg contributed to this report. Matt Viser can be reached at maviser@globe.com.