Thieves made off with wheelchair 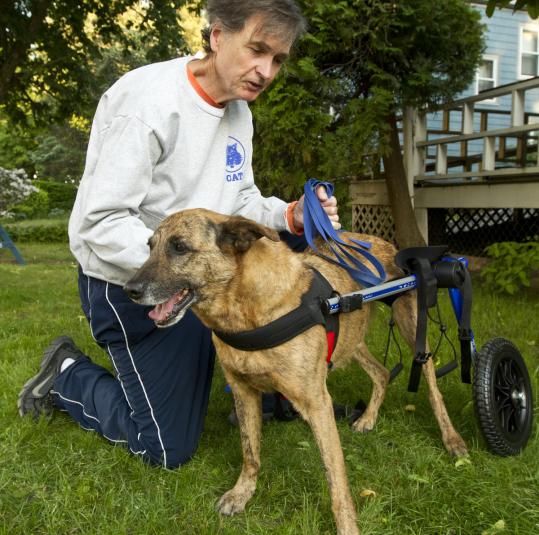 After a disabled dog’s wheelchair was stolen from the front yard of his owner’s West Roxbury home Sunday, a New Hampshire-based company that aids handicapped and injured pets has donated a replacement cart.

“The disaster that happened yesterday is now turning out to be a wonderful experience,’’ David Feeney, the owner of 12-year-old Lucky, a Belgian Malinois, said yesterday. “It’s been overwhelming the support I’ve been given.’’

Feeney, 63, believes his beloved dog’s wheelchair was stolen from the front of his Temple Street home in West Roxbury after Lucky had his usual Sunday morning playtime outside of the cart. The wheelchair — also called a dog cart — elevates the dog’s hind legs.

“Somebody must have grabbed it right away,’’ he said. “Who knows why this happened.’’

Realizing later in the evening that the cart was missing, Feeney called police, who helped him search the neighborhood using a spotlight.

“They were fantastic, very compassionate,’’ he said of the police. But, the chair was nowhere to be seen, and Feeney said he does not believe police have made any progress in tracking it down.

After hearing the story, which was first reported by WBZ-TV, HandicappedPets.com of Nashua donated a chair to Lucky, who is unable to use his hind legs. The company fitted Lucky with a new, fully adjustable chair yesterday afternoon. That chair type can retail between $400 and $500, the company said.

“We wanted to do anything we could to right a wrong,’’ said HandicappedPets.com spokeswoman Lisa-Marie Mulkern, who said the company was notified of the theft by a former customer from Jacksonville, Fla., who called after reading media reports online.

“It certainly didn’t appear that anyone was going to return Lucky’s chair and we didn’t want him to have to wait,’’ she said.

Feeney, a Boston native, rescued Lucky several years ago while teaching and doing humanitarian work in Bogotá, Colombia. The dog had been hit by a car.

“He was just lying there dying in the street. No one wanted to help him,’’ said Feeney.

After several other veterinarians refused, Feeney said he was able to find one to help Lucky.

The dog had severe internal bleeding. “He was supposed to die overnight,’’ Feeney said.

But, the resilient dog pulled through and became Feeney’s best friend, traveling with him to other countries, where Feeney has continued his humanitarian efforts, including in Guatemala and Mexico.

“He brought a lot of joy and happiness to a lot of sad children in these places,’’ Feeney said in a telephone interview. “He’s been the light of my life.’’

Lucky was able to walk and even run for a while after being struck by the car, but eventually the injuries called for surgery that left him immobilized.

Matt Rocheleau can be reached at mjrochele@gmail.com.