Palin hits town to pick her spots, take her shots 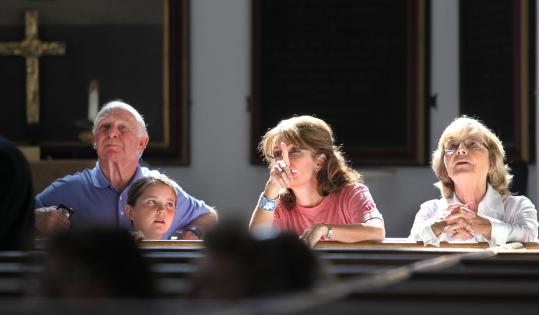 Trailed by a horde of media, an impersonator, and autograph seekers, Sarah Palin blitzed through Boston yesterday, touring several historic sites and cheerfully skewering Mitt Romney on his home turf on the day of his 2012 presidential campaign launch.

Then she drove to New Hampshire to court voters just miles from the farm in Stratham where Romney had made his big announcement hours earlier. All the while, the former Alaska governor turned reality television star insisted she was not running for president, at least not yet, and wished Romney well.

“Coincidental that we’re in the same territory at the same time,’’ Palin said. “But more power to Mitt as he mounts his cam paign, and best of luck to him.’’

Palin was in Boston for just a few hours, enough to spend about 30 minutes visiting three iconic Revolutionary War sites. As has been her practice throughout her tour of historic sites along the East Coast, she did not tell reporters where she was going beforehand. It made for a frenetic cat-and-mouse game as journalists chased her SUV through the narrow, clogged streets of the city and then tailed her One Nation bus along the highway to Seabrook, N.H.

At most stops, she was joined by a few aides; her daughter, Piper, 10; and her parents, Sally and Chuck Heath. She made no speeches or policy pronouncements and took only a few questions from the media. She handed out autographed copies of the Constitution and signed T-shirts and baseball caps for squealing children and wide-eyed tourists. She said she was “getting goose bumps’’ from all the history she was glimpsing in Boston.

“You’ve got to know a lot about our past in order to know how to proceed successfully into the future,’’ she said.

At the storied church, Palin sat in a pew traditionally reserved for governors and, accompanied by the vicar, Stephen T. Ayers, climbed to the steeple where Revere had lanterns displayed to warn of the approaching British assault in 1775.

Walking outside, she was mobbed by cheering fifth graders from Waltham and cornered by Cecilia Thompson, a Palin impersonator from the North Shore, who was in full Palin garb with a bright red jacket and wire-rim glasses. The two Palins embraced, and the real one pointed to the swarm of media, which included a crew from “The Daily Show.’’

“Now you go talk to all these reporters,’’ Palin said, laughing. “And you speak for me.’’

Drawing pointed fingers and stares from elderly men with canes and young women with trendy handbags, Palin walked up Salem Street to Parziale’s Bakery, a shoebox-sized, 104-year-old shop, where she was handed a box of cannoli and pizza.

“You can learn a lot from people like this, that work so hard — obviously not waiting for other people to do it for you, you’re just doing it yourself,’’ she said, thanking Dino DiFronzo and other members of the family who own the shop.

Afterward, she visited the nearby Paul Revere House and the Bunker Hill Monument in Charlestown.

It was there that Palin, responding to reporters’ questions, happily fired away at Romney with some of the sharpest comments of her unusual tour, which she insists is designed only to highlight America’s great historical sites. Blasting the former Massachusetts governor’s 2006 universal health care law, which is a model for President Obama’s law, she said Romney would have a “big challenge’’ appealing to Tea Party activists, who “are pretty strident in a good way.’’

“It’s tough for a lot of us independent Americans to accept [the mandate] because we have great faith in the private sector and our own families and our own businessmen and women making decisions for ourselves — not any level of government telling us what to do,’’ she said. “In my opinion, any mandate coming from government is not a good thing.’’

The similarities between the Massachusetts law and the national law, which is reviled by Republicans, have become one of Romney’s major vulnerabilities as he seeks the GOP nomination. Despite her criticism, Palin applauded Romney for declaring as he launched his campaign that Obama “has failed America.’’ She said she was not trying to undercut his big day by visiting Boston and New Hampshire.

“I promise you that it never was a consideration at all,’’ she said. “In fact, if he personally would be offended by our stepping foot in a state that he is in, I wouldn’t do it. But I don’t believe that Governor Romney is offended at all.’’

In Seabrook, N.H., Palin stood on a windswept dock, lamenting burdensome fishing regulations with a crew of men who were hauling cod, pollock, and lobsters on the deck of the 45-foot Lady Victoria. She told them her husband’s family has been fishing for generations in Alaska, and said, “I love your industry.’’ The fishermen were impressed.

“I’d vote for her hands-down,’’ said one of them, Charles Eastman, a Stratham resident who said he watches Palin’s speeches online. “I love her. Any woman that can go hunting and fishing, and show America that America is for Americans and not sending everything we own overseas, we’re all for it.’’

Palin’s final stop was a clambake in Seabrook, where she hobnobbed with a small crowd that included former governor John Sununu, who also attended the Romney event. “I love it,’’ she said, heaping praise on New Hampshire, and sounding very much like a presidential candidate. “It’s beautiful.’’

So, is she running for president?

“Haven’t decided yet,’’ she said. “Looking at the field, and knowing that there is going to be a lot of shakeup in that lineup.’’

Levenson can be reached at mlevenson@globe.com.