Officially in, Romney all about the economy 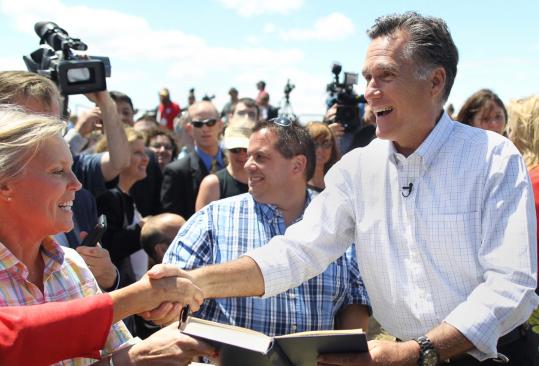 STRATHAM, N.H. — Republican Mitt Romney launched his second bid for the presidency yesterday by focusing almost entirely on jobs and the deficit, saying the country needs someone with a business background to fix the ailing economy overseen by President Obama.

In a speech peppered with patriotism — “I’m Mitt Romney. I believe in America,’’ he said by way of introduction — the former Massachusetts governor blamed Obama for high gas and food prices, falling home values, rising national debt, and joblessness.

But illustrating the hurdles for Romney — a presumptive but shaky front-runner in an unsettled GOP field — other potential candidates snatched much of the spotlight on a day that was sup posed to be Romney’s alone.

Sarah Palin did what most other candidates have avoided, attacking Romney head-on over mandated health coverage in his Massachusetts reform plan. And she did it after walking the Freedom Trail in the state Romney governed for four years.

Former New York mayor Rudy Giuliani, also in New Hampshire, continued stoking speculation that he will enter the race and said that New Hampshire would be crucial to his strategy. And a former top adviser to Romney suggested that former New York governor George Pataki enter the field and launch a campaign from the Granite State.

“It’s a busy day in New Hampshire,’’ said Steve Duprey, one of the state’s Republican National Committee members. “The race has started.’’

Romney, wearing black slacks and an open-collared shirt, made his announcement at a farm near the seacoast, where he continued to portray himself as a low-key man of the people. He walked from a house next door to the Bittersweet Farm hand-in-hand with his wife, Ann, and immediately began serving her special chicken-and-bean chili (made the day before with 36 crockpots at campaign headquarters in Boston).

He roamed the crowd, where parents thrust their children toward him and a Vietnam veteran shook his hand and addressed him as “Mr. President.’’

John Deere tractors were placed around the property, and the bales of hay gave the candidate a stuffy nose from allergies. Aides raced around dressed in blue T-shirts with the campaign slogan, “Believe in America.’’

It was all a marked departure from four years ago, when Romney announced his campaign in Deerborn, Mich., and then flew by private jet to other announcements in several early primary states. It illustrated the importance that New Hampshire will play in his campaign and just how much he will court voters in a state that puts more emphasis on fiscal issues than on social issues.

Romney did not mention abortion or gay marriage yesterday and focused almost entirely on economic themes. As an indication of what Romney wants to talk about, during his 19-minute speech he mentioned America 37 times, the economy 10, Obama eight, taxes six, health care two, and abortion zero.

“When [Obama] took office, the economy was in recession and he made it worse, and he made it last longer,’’ declared Romney. “It breaks my heart to see what is happening to this great country,’’ he said, speaking from a teleprompter. He added at another point, “No, Mr. President, you had your chance.’’

Romney’s speech was also thick with his own biography, an indication that despite entering the race as one of the most well-known candidates, the campaign is trying to reintroduce him to voters.

He focused on his background as an executive at Bain Capital, as well as his tenure overseeing the 2002 Winter Olympics. But he also talked about his four-year term as governor, highlighting that he balanced the state budget without raising taxes — but neglecting to mention that he also raised fees for a host of services.

Romney devoted a portion of his speech to foreign policy. He criticized Obama for not speaking out sooner in support of dissidents in Iran and Libya and said the president was “treating Israel the same way so many European countries have: with suspicion, distrust and an assumption that Israel is at fault.’’

Romney praised the decision to send additional troops to Afghanistan, but criticized President Obama’s announcement of when troops will withdraw.

“The Taliban may not have watches, but they do have calendars,’’ Romney said.

Romney, who did Mormon mission work in France and speaks French fluently, also railed against Obama for providing “European answers’’ to American problems.

“The president seems to take his inspiration not from the small towns and villages of New Hampshire but from the capitals of Europe,’’ he said. “With the economy in crisis, his answer is to borrow money we can’t afford and throw it at Washington bureaucrats and politicians. Just like Europe.’’

Romney yesterday also reiterated a call for capping federal spending at 20 percent of gross domestic product, which has been the average during recent decades.

But federal spending has increased dramatically in recent years as a result of outlays for such things as federal stimulus spending and wars in Afghanistan and Iraq.

Spending as a percentage of GDP is expected to be 25.3 percent this year, the highest level since 1945, according to figures compiled by the Office of Management and Budget.

Attempting to answer criticism that his health care plan in Massachusetts is too similar to the plan Obama spearheaded for the nation, Romney reiterated his pledge to repeal the federal health care law.

“I took it on and hammered out a solution that took a bad situation and made it better,’’ he said of the Massachusetts health care law. “Not perfect, but it was a state solution for a state problem.’’

At another point, Romney said, “If I ran through all my mistakes, Ann would love it and you’d be here all night.’’

But he has stood steadfastly behind his Massachusetts health care plan, including the portion that requires residents to obtain health insurance or face tax penalties.

That answer may not satisfy the Republican electorate, given the responses from two of his potential rivals.

“In my opinion, any mandate coming from government is not a good thing,’’ Palin said at the foot of the Bunker Hill Monument before heading to New Hampshire. “It’s tough for a lot of us independent Americans to accept [the mandate] because we have great faith in the private sector and our own families, and our own business men and women making decisions for ourselves, not any level of government telling us what to do.’’

Giuliani, speaking in North Conway, N.H., was also critical of Romney’s health care position and said he should apologize for it.

“The reality is that ObamaCare and RomneyCare are almost exactly the same,’’ he said. “I’d think the best way to handle it is to say, ‘It was a terrible mistake. If I could do it over again, I wouldn’t do it.’ ’’

Last night, Romney headed to Boston for a campaign fundraiser at the Four Seasons.

This morning, he’ll be hosting a town hall meeting in Manchester, N.H., one of the first times he will face voters in an unscripted way, before delivering a speech tonight in Washington to the Faith and Freedom Coalition.

Glen Johnson and Michael Levenson of the Globe staff, and correspondent Shira Schoenberg contributed to this report. Matt Viser can be reached at maviser@globe.com.